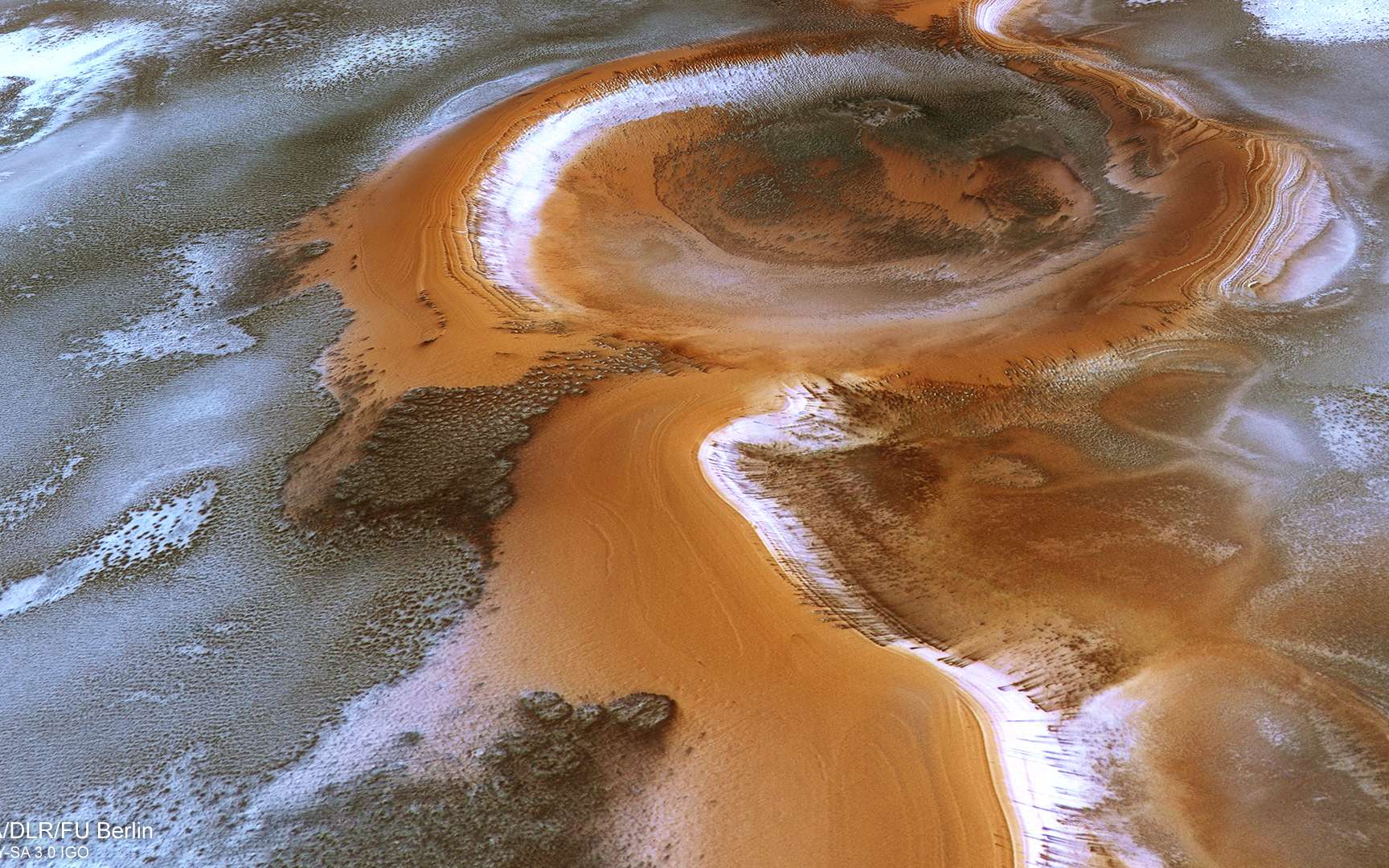 Breathtaking images of Mars in winter

Like the Earth, Mars dresses in winter with a thin layer of ice, which highlights the beauty of its landscapes. The freezing and thawing action also produces strange and amazing structures on the planet’s surface, adding a new layer of mystery to this still largely unknown world.

As described in a previous article (see below), thewinterwinter gently ends in thenorthern hemispherenorthern hemisphere Of March. During this period, the usual ocher color that dresses the Martian landscape gives way to a subtle white veil, bluish, sparkling under the sunlight. These color contrasts further enhance the beauty of the astonishing Martian reliefs, the detail of which is revealed to us by the Mars Reconnaissance Orbiter probe and its HiRISE camera, which has been scanning the surface of Mars since 2006.

The surface of Mars is far from monotonous. The ventsvents that travel the planet thus shape dunes of various shapes, which are covered in ice during the winter.

But, when the good weather returns and the temperatures rise, this thin layer of ice begins to evaporate. It is the phenomenon of sublimationsublimation : dry ice passes directly from the solid state to the gaseous state, without passing through the liquid phase. the gazgaz carbon then escapes in the form of small geysersgeysers which pierce the crust of ice, leaving behind strange bluish imprints. The sand thus freed from its frozen shackles therefore appears below, leaving darker traces on the ground still marked by winter.

This phenomenon of freezing and thawing which is repeated each year can draw strange patterns on the Martian soil which then seems finely textured. Indeed, when the ground freezes, the water it contains expands and develops many fractures. When it thaws, the ice sublimates and escapes through these interstices.

But it is certainly at the highest latitudes, where the layer of ice resists all year round, that the Martian nature presents its most impressive pictures.

If these images make us dream, they also present many structures that still intrigue scientists. This is the case of the terrace deposits, marked by radial lineations, observed in the bottom of this crater located in the plains of Arabia Terra. Again, this pattern appears to be related to the sublimation of the ice that gradually sculpted the crater floor over thousands of years.

The sublime and “unique” winter landscapes of the planet Mars

Today, December 26, 2022, is the New Year for Martians. The 37th year, officially, which begins with the arrival of spring in the Martian northern hemisphere. Echoing our winter which has just begun in the Earth’s northern hemisphere, here are some photos of the sublime and “unique” Martian winters.

Mars is still beautiful and sparkling in the night at the moment, shining like a ruby ​​resting in the sky in this month when the Red Planet is closest to Earth (the 1is December, it was only 81.4 million kilometers away). At 91 million kilometers from Earth today, our neighbor is also experiencing seasonsseasonsbut longer, about six months each.

The winter landscapes there have nothing to do with those on Earth, but they are no less wonderful and “unique”, as these images of the NasaNasa taken by its space probes over successive winters. The cold season on Mars means even lower than average negative temperatures (which are not far from what the United States has been enduring for the past few days): up to -123°C at the poles. Naturally, these are the two regions where the imprint of winter is the deepest and most visible, even redrawing reliefs.

This December 26, 2022, date ofspring equinoxspring equinox in the northern hemisphere of Mars, officially opens its 37e year (we had to start one day). The first dates back to April 11, 1955, after scientists decided to choose the passage of Mars at the vernal point to start the calendar. Winter (154 Earth days) therefore ends in this part of the Martian globe, while summer (178 days) still stretches until January 12 in thesouthern hemispheresouthern hemisphere. Nevertheless, the relative “mildness” of the austral summer did not remove all the ice from its cap. The changes are clearly visible from space.

In the telescopestelescopes terrestrial, these changes are much more difficult to observe and to follow according to the inclination of the planet, but the probes in orbit, as for them, are and will be at the forefront to see the spectacle of the coatcoat of dry icedry ice thicken in the south and fade in the north, and the frostedfrosted leave the plains, the winds and the stormsstorms get up, landscapes softened and transformed by the sourcesource ice cream, etc.

So many beauties that scientists can discover with resolutions unequaled for two decades. There are even gas geysers surprised by MRO (Nasa) and Mars Express (ESA) in several of these images. They occur during the sublimation of ice in the various underlying layers. A process that participates in the transformation of the landscapes of these regions at the end of each winter (12 to 16% of theatmosphereatmosphere Mars turns into ice), and which modifies the balance of gases in the atmosphere so that their return to massemasse in the spring significantly changes the pressionpression and unleashes planetary storms. It may well be that CuriosityCuriosity and Perseverance will soon witness it.

See also  Brazil: images of chaos and damage after the reissue of the "Capitol" in Brasilia

Mars Express gives us a great shot of the Red Planet