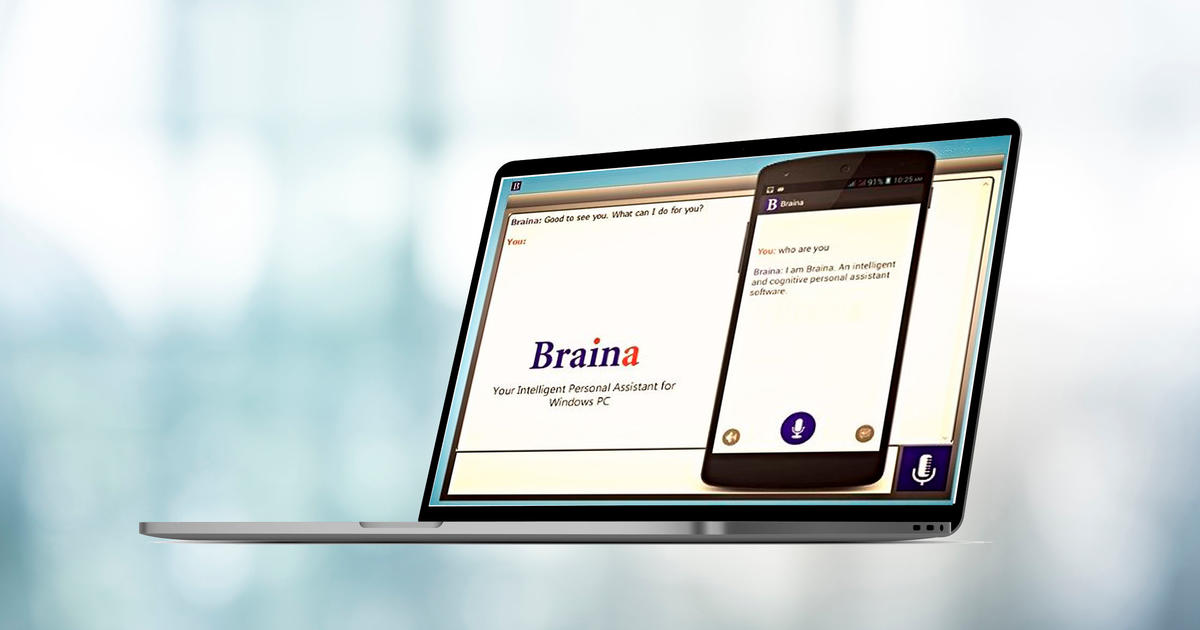 Just keep your fingers off the keyboard and mouse and use voice control to turn your computer into a personal assistant, just like iRobot? With “Braina” – the product name “Braina” is made up of the words “Brain” and “Artificial” – the manufacturer Brainasoft promises exactly that: Thanks to the speech recognition application, users should save themselves from pressing keys and control computer functions simply by announcement.

Braina is advertised as an “Artificial Intelligence Virtual Assistant”. The program uses patented solutions for speech recognition and Natural Language Interface. In practical terms, this means for users that they can communicate with their computer via Braina in the usual tone.

In principle, this also works. The technical promise is therefore fulfilled. In addition to German, users can also communicate with Braina in English (in different versions), Spanish, Russian, Greek and even Thai or Hindi. The software supports a total of 100 languages. However, a little discipline is required. All those with a pronounced dialect have to switch to the written language – for example, Braina does not understand Swiss German.

According to Braina, she also records everyday speech 99% accuracy. Independent tests consistently confirm Braina’s accuracy. The comparison with Cortana – another speech recognition software from Microsoft – is obvious and underlines the advantages of Braina again. This is not least a reason for Microsoft’s decision to remove Cortana from the app store for mobile devices.

Even with technical jargon, the software should hardly have any problems. The developers promise that Braina will also do most of it easily understand and process medical, legal and scientific terminology can. An important plus in this context is that users can also teach Braina vocabulary. The artificial intelligence aspect of the software makes the program customizable, so that missing vocabulary should not pose a major hurdle in long-term use.

The user interface, a setback

However, the biggest point of criticism and also the biggest hurdle for using the software is its very antiquated user interface. Braina doesn’t necessarily impress with its design. It almost seems as if the developers themselves lost interest in the product a long time ago and therefore stopped developing it further.

The functions can certainly also be operated by technically inexperienced employees and in the event of difficulties, a Live-Support advertised, but the user interface is so uninviting that you probably don’t even want to consult support.

Although Braina was originally developed for Windows, the software can also be used on iOS devices and Android operating systems. If you want, you can also install Windows on your Macbook and use the Windows version of Braina.

Braina runs best on Windows, SaaS, iPhone, iPad, and Android. However, the application does not yet work on Chromebooks. Users who update regularly do not have to meet any other technical requirements – apart from connecting a working microphone, of course, if none is preinstalled in the hardware. Once installed, users only have to open the Braina icon and activate speech recognition in the lower right window with a mouse click.

The Braina officials describe the program as an “intelligent personal assistant”. Although this personal assistant cannot fetch coffee, it can make appointments, search search engines, set the alarm, play media and solve more complex mathematical tasks – and all of this, of course, via voice control. If desired, users can even have e-books or other files read out to them by Braina.

But what is the difference between Braina and other popular digital assistants like Siri? In fact, the functions of the two programs are very similar. Above all, users who mainly need the basic functions will hardly notice any major differences in the range. However, Braina is in the Speech understanding much more accurate. While Siri is only about 80% accurate, Braina promises a more comfortable handling with 99%.

At the latest after typing thousands of words, your fingers will appreciate a short break. Braina offers an inbuiltDictation function in Office applications – above all, of course, Microsoft Word. In fact, the latest Word version has its own automatically pre-installed dictation function, but Braina clearly promises one more accurate speech recognition and a smoother process.

Like many software manufacturers, Brainasoft also offers one free entry-level version – called “Braina Lite” in this case. Of course, not all functions are available to users with the free version, but the basic package also allows a good insight into the world of Braina. Simple commands and reading texts is possible However, the dictation function is not included in the free version. Language changes are also only available to a limited extent here.

With a Braina Pro Access is available to users all functions to disposal. Accordingly, this variant is the most popular solution for professional use. Braina Pro and Braina Pro Lifetime differ only in the License Availability. While Braina Pro access has to be renewed annually at a price of $79, lifetime access costs a comparatively low price of $199. You can download the various offers here.

Braina executes numerous commands, reads out files or entire e-books and also provides dictation functions in the Braina Pro version, so that texts can be written without typing. The precision of the language software is impressive and where such a solution is to be used permanently, Braina’s lifetime license for $199 is a cheap and worth considering offer.

So who is Braina suitable for? Thanks to the support of medical, legal and scientific terminology, the solution in the Pro version with the integrated dictation function is a useful tool in these areas, for example for recording findings or protocols. Braina is also worthwhile for employees in the administrative area. Content creators can also give their fingers a break with Braina and reliably dictate texts.

However, the software urgently needs a facelift and a new user interface (UI). The user experience is more than just “retro”. As far as this aspect is concerned, which is also not exactly unimportant, there are far better solutions on the market. You should consider this before investing. Because a product that is used only reluctantly may not really be worth the money in the end.