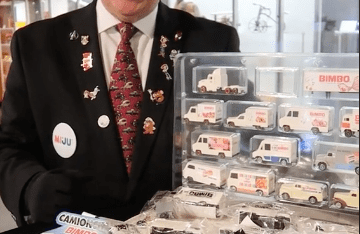 Bimbo toy collector arouses the envy of the networks

A toy collector has chosen to show some merchandising items that Bimbo has put out over the decadescausing the envy of the networks.

Currently there are countless brands that have managed to position themselves effectively around the world (regardless of the aspect in which they develop), where marketing strategies have played an indispensable role in its success.

Among them, it is worth highlighting those that offer the population a wide variety of food products, which manage to stand out for being one of the most important today. According to the graph from Statista where it shows the companies in the food industry with the highest sales value in Mexico During 2020, Grupo Bimbo placed first by attaching 331 billion pesos, in second Sigma Alimentos with 135 billion pesos, in third Gruma with 91 billion pesos, in fourth PepsiCo Alimentos México with 84 billion pesos and in fifth Grupo Lala with 80 billion pesos.

achieve this sales value and brand presence in the mind of the consumer It is not won overnight, but the branding of companies and other positioning strategies have played a very important value, which we have constantly seen over the years.

Bimbo group invests considerable monetary amounts to carry out marketing strategies that manage to position themselves effectively in the mind of the consumer, as demonstrated a few decades ago with some toys and merchandise limited edition on its products, whose image seems to have been permanently registered among its consumers.

On this occasion, a collector has chosen to display his Bimbo toys that he managed to take care of over the years, awakening the nostalgia and envy of users.

His collection has some of the Bimbo’s “trucks” that have evolved over the years, as well as the vehicles that are used to transport their products (and toys) in different countries.

Among some comments from users reacting to it, we can find “a jewel”, “everything you have impresses me a lot”, “I had a little truck, but it got lost”“right in childhood”, “My grandmother has those”“I remember that when I was a girl, funniest and most beautiful things came out”, among other thoughts that have demonstrated the effectiveness that Bimbo achieved by offering this type of collectible items.

Merchandising items have proven to be a strong opportunity for brands to position themselves effectively amongst their consumers, where these particular products (usually as part of a special edition, launch or campaign) have proven to be strongly loved at that very moment and even later (as these consumers have shown).

Also, this type of collectible merchandise they would accompany consumers in their home, office and could even take them to remember a moment with a loved one (in case they had been watered or that the brand is liked by an acquaintance of theirs, etc.), thus increasing the invaluable positioning that the brand has in their memory.

We have seen an example of this with special editions with other brands that chose to carry out this type of strategy a few decades ago, as Sabritas demonstrated with its mugs or even Pepsi with some special edition bottles and glasses of Back to the Future, exhibiting a strong position despite having passed 10 years since its launch.

Las collectible merchandising strategiesdespite having their heyday a few decades ago, they continue to remain strongly present in the minds of consumers.

“I need them”; Bacardí accepts his nicknames and this is how the clientele reacted

Chart of the day: The most visited museums in the world