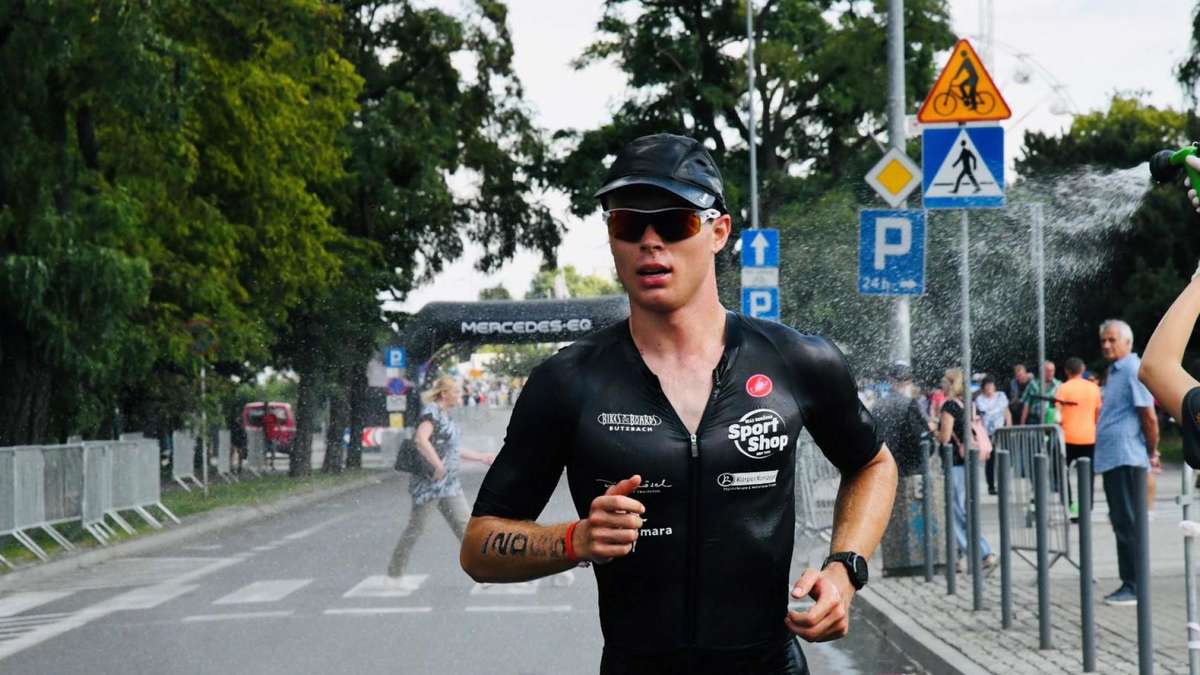 The dream of Hawaii has come true. Vincent Großer wins his age group at Ironman Poland and secures his participation in the World Cup. The man from Giessen is overjoyed.

It was hard work and the last 20 km of the marathon really hurt. So I’m all the more delighted with first place and the Hawaii slot, ”summed up Vincent Großer at the finish of Ironman Poland in Gdynia. In fact, he had achieved all his goals in a superior manner and at the same time secured qualification for the long-distance world triathlon championships in Kona, Hawaii by winning the age group M 18-24. In the meantime, things didn’t look good for the 24-year-old from the Giessen triathlon team, because a breakdown on the bike initially stopped his ambitions.

After a short night, the alarm clock rang at 4 a.m. and the start siren sounded punctually at 7 a.m. for the almost 800 participants on Gdynia Beach. 3.8 km swimming in the harbor basin of the Polish metropolis on the Baltic Sea, which was rather restless due to the low pressure area and the onset of rain and made the conditions difficult right at the beginning.

Larger got into his rhythm quite well and was already in the top eight after half of the swim distance in his water shadow, however, the Belgian Bruno Slegers, who should become the biggest opponent in the fight for first place due to the preliminary results. After a good 58:55 minutes in first place in the age group and 7th overall, Großer climbed out of the Baltic Sea and after a good change he wanted to get on his time trial machine at the end of the 300 meter long transition zone, but had to find that due to the bumpy surface when pushing The chain had jumped off the large chainring and was wedged between the crank and the frame. In the end, only the nearby service point helped, which managed to reassemble the chain properly after a few minutes.

“If that had happened on the track without a service point, my race would have been over by then,” said the Giessen triathlete, conciliatory with his fate. In the meantime, however, the Belgian had already passed him and it was 50 km before Großer was able to drive up to Slegers again and overtake him in turn. 182 km and more than 1700 vertical meters on partly very bad roads had to be mastered on the demanding bike route and in the end, Larger managed to get back to the transition area in Gdynia with a lead of almost 20 minutes. 4:55:37 hours on the bike meant not only first place in the M 18-24 age group, but also seventh place overall and a good starting position for the final marathon.

If you factor in the loss of time of a good four minutes due to the fallen chain when changing, the average is still almost 38 km / h, which, under the given conditions of continuous rain, meters in altitude and road conditions, meant an absolute top performance.

Just in time for the marathon, the sun was back in Gdynia and now it was a matter of running your own race on the four laps of 10.5 km through the city center of Gdynia according to the specifications, eating well, drinking enough fluids and yourself to cool sufficiently. This worked very well at first and with kilometer times of around 4:17 minutes, the Fernwälder was absolutely on target. Slegers also got off to a quick start on the running track and was even able to catch up with a good minute at kilometer 10. The lead of around 24 minutes is still comfortable at this point. Constantly provided with intermediate times by the accompanying supervisors, everything went according to plan up to half of the running distance, but from kilometer 22 the exertion and heat became clearly noticeable and the times fell noticeably. Fortunately, all the other athletes felt the same way that day and it became clear that the organizer had planned far too few refreshment points. In the end Vincent Großer ran with a safe lead after 3:23 hours for the marathon as the winner of the age group M 18-24 and eighth among all participants in the finish of the Ironman Poland in Gdynia and let himself be by the numerous spectators and the celebrate your own attachment.

“I’m only partially satisfied with my total time of 9:24:58 hours, because more would have been possible without a breakdown and on better roads with less rain, but in the end the result counts – and that’s brilliant,” said Großer im Goal overwhelmed by what had been achieved and proudly took part in the award ceremony and slot handover for the World Cup in Hawaii the following day.

Now it is time for older people to recover as much as possible from the exertion in order to then make their dream come true on October 9th in Kona on the Big Island / Hawaii and achieve a good World Cup result.