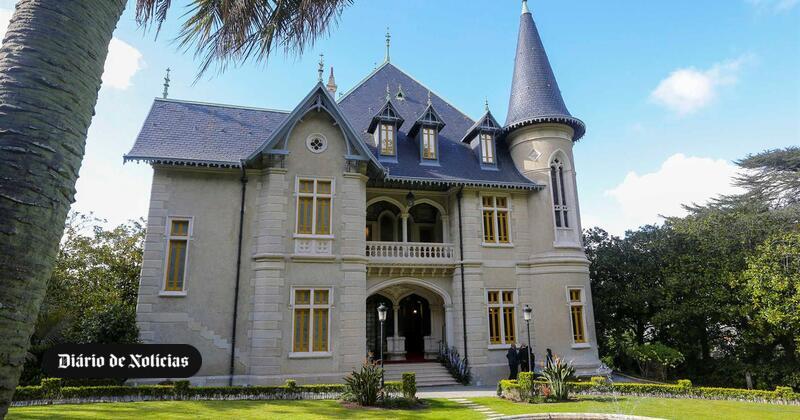 Hidden between the steep paths and the Sintra vegetation, the Biester Palace will open for exhibition for the first time so that the world can get to know what they already call “the new treasure of Sintra”.

This historic palace has been restored and preserved – maintaining the architecture, decoration and works of art that live in it – and from this Saturday, the rooms that were empty for so long will finally be able to be visited.

Built in the last decade of the 19th century, the building “where everything was thought to be appreciated” is an example of the Portuguese romantic architecture of the time. The Palace, with neo-Gothic, English and Alpine influences, was originally the residence of the Biester family, who commissioned it from the renowned architect José Luiz Monteiro, in 1880, and made it “a timeless symbol of Sintra”, reads the press release on opening the space to the public.

At Biester there are works by several “artists who left an indelible mark on the avant-garde and eclectic essence of the Palace” and who “show the domestic life of the family that inhabited it”, among them the Portuguese woodcarver Leandro de Souza Braga. In this chaletthe entrance gallery, the library, the living room and the ballroom also show paintings by the Italian Luigi Manini and two large fireplaces with tiles by Raphael Bordallo Pinheiro.

In addition to the terraces with unique views over the city, on the first floor of the palace, the neo-Gothic chapel is the main highlight. This room, marked by the strong colors of the stained glass windows, distinguishes paintings by the Frenchman Paul Baudry on the ceiling and is strongly linked to the legacy left by the Knights Templar in Sintra.

Still within the theme of spirituality, on the lower floor of the Biester there is a division that is surprising for being inside such a luxurious building: the Initiatic Chamber. This small corner built entirely of stone and inspired by the shrines of the ancient city of Jerusalem – which inspired modesty – contrasts with the richness of the Templar chapel.

Outside, there is a long way to go in the nature of Sintra between greenhouses, lakes, waterfalls, a tea house, a viewpoint and the Gruta da Pena. The beauty of the palace “extends from the inside out”, with a natural park that complements the architecture of the place, “in the heart of Sintra’s nature”.

Parque Biester, designed by landscaper François Nogré, is arranged on a slope and has different levels that offer privileged views of the Moorish Castle, Quinta da Regaleira and the city of Sintra, always having the palace as a backdrop. The park also has a wide variety of exotic species: “Camel trees from China and Japan, green and red beeches from Central Europe, Acacias from Australia and North American firs”.

From Sintra to Hollywood, the wealth of the palace is not indifferent to anyone. THE chalet he was already a star in 1999, when he was chosen by director Roman Polanski to film some scenes for Thriller The Ninth Door, starring Johnny Depp, Lena Olin and Frank Langella.

“Art offers us the only possibility to fulfill life’s most legitimate desire, which is not to be completely erased by death.” It is with this phrase by Eça de Queirós that Abílio Lobato dos Santos, administrator of the chalet, recalls the importance of the Palace for the Cultural Heritage of Portugal, in its first presentation to the public. The administrator considers that his mission “couldn’t be any other” than “to make known this palace built by people and designed for people, who are interested in it”. “Although built as a personal residence, Biester was conceived as a space to receive and to exhibit. Everything was made for the human eye and sensibility. Keeping this space inaccessible to the public would, in my view, deprive it of one of the most beautiful properties of Sintra’s heritage”, he reveals.

Now open to the public, every day of the week (from 10 am to 8 pm, summer time), tickets to visit Palácio Biester, on Estrada da Pena, range from 10 euros for adults and five euros for children and seniors.