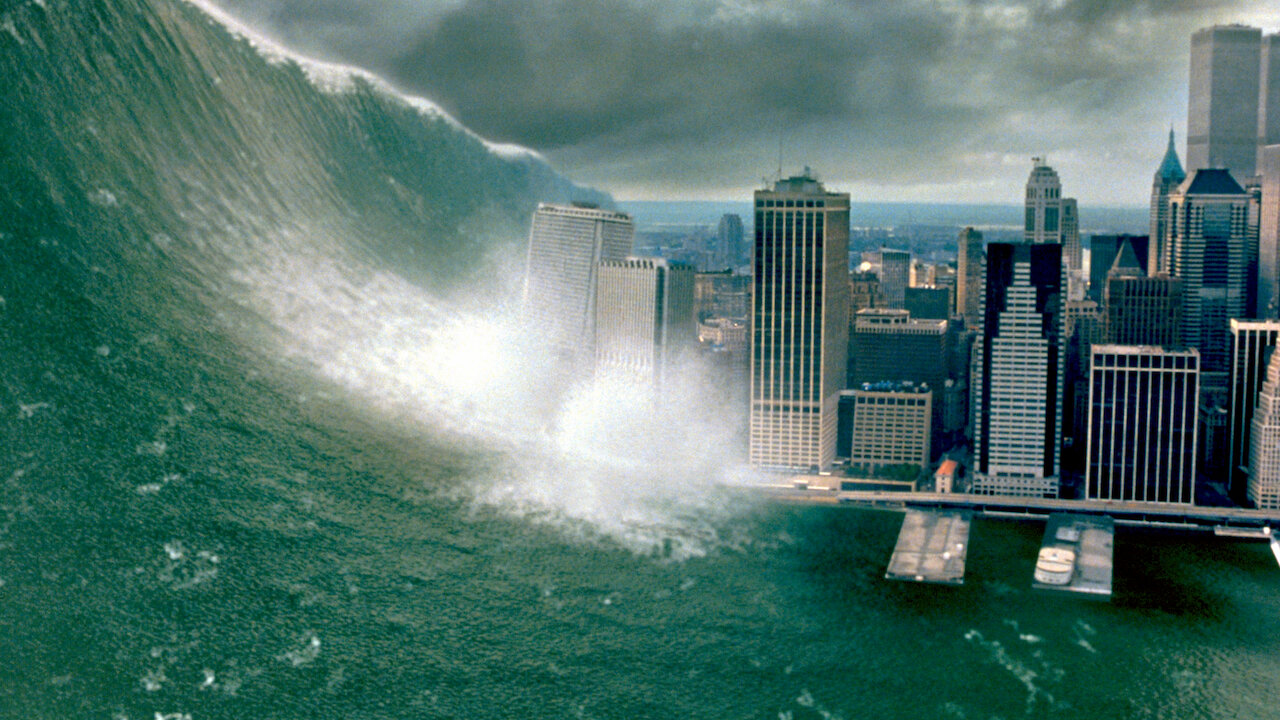 How does the film Deep Impact rate compared with other disaster movies?(Image credit: Paramount Pictures)

As humankind races against the clock to save planet Earth from global warming before it’s too late (spoiler: we’re already in a bad position), it’s sometimes good to revisit the best disaster movies that show us just how special our world is — revealing why we should do everything in our power to preserve it and not forget that nature is in charge. We’ve put together a list (in no specific order) of the best disaster movies to watch right now.

What can we accept as a disaster movie? Well, they have to tell stories about natural catastrophes, unfortunate disasters or humankind toying with forces they don’t fully understand. However, many of the movies which could fit the bill take place in outer space and deal with threats that could affect more than just planet Earth (2007’s Sunshine is a good example), so we’ve decided to leave out those and have instead focused on disaster movies in the classical sense.

Some of these movies aren’t regarded as “good” by Hollywood standards, but we’re more interested in the disasters they portray (and how scientifically accurate those portrayals are). This list features both well-known classics and overlooked disaster flicks with cool premises, while also looking at some of the real life events that inspired them. If you’re ready for this bumpy ride, read on below.

If you love science-y movies, check out our other movie content like our guide to the best shark moviesas well as all of the Jurassic Park movies, ranked worst to best.

Volcanoes are scary and entirely out of our control, and Hollywood studios made sure to bank on the potential hot spectacle that comes with them with Dante’s Peak and Volcano, both released in 1997. Neither resonated with critics nor audiences back then, but both are worth revisiting now.

We’ve chosen to go with Dante’s Peak because it always felt like the more unique movie, taking more time to build up towards the traditional volcano stuff and dealing with many of the effects of a stratovolcano on the surrounding areas. Plus, you can’t top how traumatizing the “grandma burning in an acid river (opens in new tab)” scene is.

No natural in this disaster, just a classic story about greed and ignorance igniting a massive tragedy. Following the massive success of The Poseidon Adventure (1972), Warner Bros. and Fox joined forces to make The Towering Inferno out of two different novels about burning buildings.

This is arguably the quintessential disaster movie from the 70s, and Paul Newman’s presence certainly elevated it. Almost 50 years later, it’s also a great example of how much a budget of $14 million could get you back then. The movie went on to make $203 million worldwide at the box office and garnered a largely positive response from critics and audiences alike.

As Hollywood entered the 2000s with many ideas for disaster movies absolutely exhausted, a handful of more off-beat projects started to pop up at rival studios. One worth remembering is The Perfect Storm, based on the 1997 creative non-fiction novel by Sebastian Junger about a fishing vessel which was lost at sea during the Perfect Storm of 1991.

While there’s no Earth-threatening event in this one, nor a human-made disaster, The Perfect Storm remains a scary and humbling tale of humans versus the worst of nature. It’s a slow-burn, character-driven blockbuster that might be too soapy at times, but the cast is stellar, and the sea has seldom looked this scary in a movie.

Like it or not, Armageddon remains one of the most enduring disaster movies ever and an undeniable 90s classic. And if you suddenly had to name three Michael Bay movies, you’d probably go with this one alongside Bad Boys and The Rock. A ragtag group of oil drillers without proper training are tasked with blowing up a massive asteroid? Super fun stuff.

The movie doesn’t make sense on a basic level (it’d be easier to train astronauts to drill (opens in new tab) than the other way around), and the same goes for its science, but it’s a remarkable spectacle that never slows down, with an all-around fun cast – including one of the most charismatic Bruce Willis performances ever — and plenty of neat set pieces. And, of course, the cherry on top is Aerosmith’s “I Don’t Want to Miss a Thing” totally selling a central drama that maybe wasn’t that good.

NASA actually has tinkered with an asteroid, albeit in a totally different situation. To see Earthlings really could redirect an asteroid, NASA sent the Double Asteroid Redirection Test (DART) spacecraft to smash into the asteroid Dimorphos, which was speeding along about 7 million miles (11 million kilometers) from Earth in 2022.

See also  Microsoft is a phone operator in France, it's official

DART redirected the space rock’s orbit more than NASA thought it would, so maybe Armageddon isn’t so far-fetched, after all.

If 1997 was about volcanoes, then 1998 was the year of space rocks potentially blowing up Earth. Deep Impact arrived in cinemas roughly two months before Armageddon and presented a brainier take on the matter. The critical reception wasn’t much better though, with critics slamming hard the overabundance of “cheap melodrama” and its slow-paced nature.

We definitely agree that Deep Impact isn’t the most exciting blockbuster around, but in hindsight, that’s what made it so special and deserving of a spot on our list. Its brooding and thoughtful tone is a rare occurrence for this type of movie, and that devastating but hopeful ending — massive tsunami included — makes up for the duller chunks of the script.

Many recent disaster movies have chosen to take the biographical route and stick closer to the human drama amidst all the unstoppable destruction. 2012’s The Impossible, which recounted the 2004 Indian Ocean tsunami, is a great example of this modern trend. Somehow, Deepwater Horizon didn’t get the same recognition and flopped.

Abandoning his signature action filmmaking style (but retaining the same spark for tension and quick pace), director Peter Berg crafted a breezy disaster movie that feels relatable — greedy men push too hard and workers pay the consequences — and hits like a sledgehammer once the crude oil hits the fan.

The Core belongs to Armageddon’s school of “whatever, we’re here to have fun” disaster movies (even the poster was done in the same style), only it arrived five years later and isn’t nearly as good. In fact, it might be the biggest “guilty pleasure” movie on this list of the best disaster movies.

Instead of blowing up an asteroid that threatens Earth, the protagonists are tasked with rocking Earth’s core with a series of nuclear explosions because it has stopped rotating and bad stuff is happening on the surface. How do they get there? Inside a train-like vessel that withstands and converts extreme heat into electricity. Yes, seriously.

Tornadoes are also scary, and tornado-centric disaster movies became a thing because of Twister, which ended up being the second-highest-grossing movie of 1996 with a box office tally of $495 million worldwide.

Though the movie does get crazy towards the end, it generally navigates with ease the line between “actually grounded and believable” and far-fetched madness. It’s scary but also beautiful, the characters are fun to follow, and Michael Crichton’s touch can be felt throughout the script. A sequel tentatively titled Twisters is being fast-tracked at Universal, by the way.

Since Twister debuted, tornado science has grown by leaps and bounds. For instance, tornados don’t form from by reaching down from the sky to Earth. Rather, new research suggests that tornadoes don’t come down from the clouds, but from the ground up.

Adam McKay’s Don’t Look Up took big comedic swings and went all satirical on the subject of the current climate crisis and how the world is reacting to it. But the movie is about an approaching comet which will cause a planet-wide extinction event to get the point across in spectacular fashion.

Don’t Look Up is both an easy and a hard watch; it’s funny and relatively fast-paced, jumping from one absurd situation to the next, but it’s also a damning look at the inaction of those with the power and resources necessary to save the planet. Even if you don’t completely vibe with it, we think it’s a must-watch that has sparked more open discussion about the most pressing issue of our time.

History has told us that disaster can arrive when we least expect it and comes in many shapes, and James Cameron’s Titanic reminded us of what happens when we underestimate our world’s harsher environments. Everyone knows about the story of the colossal ship striking an iceberg and taking more than 1,500 lives with it as it sank in ice-cold waters.

Titanic is grand, epic, and terrifying in ways critics and audiences couldn’t have predicted back in ’97, but we’re fairly sure that it worked so well for so many people because of its purely human element across two different timelines. Disaster movies don’t get any better than this.

The discovery of the Titanic could probably be a movie on its own: According to now-declassified documents, the expedition to find the Titanic was actually a cover for a secret U.S. military project to recover two nearby sunken nuclear submarines, an exhibit at The National Geographic Museum said, as reported by CNN (opens in new tab) in 2018. The 1985 mission was so successful, the team had 12 days left, which they used to search for the Titanic.

Amazingly, they found the famous vessel at 12,000 feet (3,660 meters) below water in the North Atlantic Ocean. At least that mission had a happy ending, unlike most disaster movies.

Fran Ruiz is an entertainment freelancer and massive dinosaur nerd. He has a BA of English Studies, focusing on English Literature, from the University of Malaga, in Spain, as well as a Master’s Degree in English Studies, Multilingual and Intercultural Communication. On top of writing features and other longform articles for  Live Science & Space.com since 2021, he is a frequent collaborator of VG247 and other gaming sites. He also serves as associate editor over at Star Wars News Net and its sister site, Movie News Net.