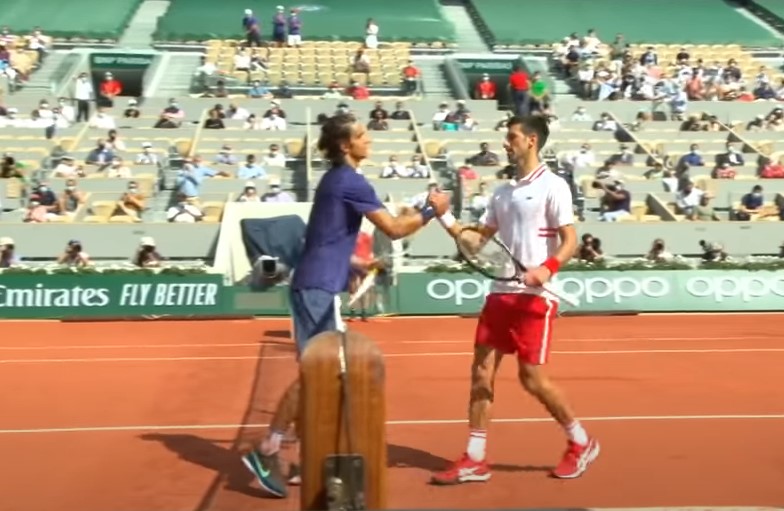 Eurosport also underlined the lack of respect towards Djokovic. This is not the case, not even in fourth-tier tournaments

What after Musetti’s exit from the Paris tournament in Italy struggles to come out is something that Eurosport translated well with a little face, in a tweet: 🤔. Frowning, questioning, a little argumentative expression. Why did Musetti leave the central court of Roland Garros, only two games – it will be just 3-4 minutes of actual play – from the honorable defeat against the number one in the world? He said it at a press conference: “No, I was not injured”. Here it is, the emoticon:

The explanation was then given by the Italian tennis player. In summary:

“In the end I was really tired and there was also some cramps. It didn’t make much sense to play anymore. I couldn’t stay in the exchange or win a point, I couldn’t move; I had reached my limit “

The criticism, mostly national, did not sink. Musetti had just played two incredible sets, winning them against Novak Djokovic, in the second round of a Grand Slam. Making a show, with a parade of shots in a competitive trance. 7/6 7/6, with a performance clearly out of range. It was understood – it was the general fear – that things would change when Djokovic did one of the things he does best: the mental click. He took the bag at the end of the second set and started in the locker room. To reset. Sometimes he does it on the pitch too, quite clearly: he stops talking in his corner, goes on the bubble, he never stops. Wins.

A reversal of the front well described by Mats Wilander (who has played a few games) immediately after the match: “Musetti must have thought ‘omioddio I’m beating Djokovic’. While Djokovic in the meantime thought ‘boy I’m Djokovic, now you don’t play a game anymore’ ”. Two forces acting in the same direction.

The point, however, is the withdrawal. At 4-0 in the fifth set. One who didn’t get it under his nose is Boris Becker. Who, cutting a lot, commented:

Why did he retire?!? https://t.co/DJ4HiKrqqg

“You must always continue and believe in yourself from start to finish, especially against the greats. Lorenzo Musetti is the best teenager, along with Sinner. When facing the greats on the scene, you need to be physically and mentally ready. Young talents don’t understand this. It’s not just about playing tennis, it’s about character and personality ”.

And, also, of respect. And sports culture. Barring physical trouble, retiring to escape the full satisfaction of someone else’s victory is not a nice gesture. This is how it works in the fourth category, let alone on the central Ronald Garros in the presence of a legend. “I could no longer make a point, it made no sense to continue” is an understandable failure, of course, but hardly justifiable. If you can still stand up, you honor your great performance – because it was anyway – by staying on the pitch, accepting the lesson. Withdrawal is a stain. And the acceptance of the justification adduced is a symptom of a greater, contextual immaturity. Nadal, at 19, in the same conditions, would have been killed in order not to leave that field.