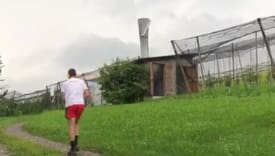 Bauer is now officially allowed to shoot against hail

For farmers, hail means trouble. Because the ice balls can quickly destroy an entire harvest. That’s why a fruit grower (29) from the canton of Bern took an unusual measure.

The young farmer wants to destroy the hail with a so-called hail cannon. The cannon emits a pressure wave that occurs when a gas-air mixture explodes, as reported by the “Berner Zeitung”. This is to keep the hail away from the field.

The explosion, however, causes a hell of a noise. In recent years, the municipality has therefore received several noise complaints against the farmer. For this reason, the Bern cantonal police carried out noise measurements on the Bern farm years ago.

With the result: the cannon is too loud. But the fruit grower did not want to accept that. He took the verdict to the next higher instance.

Although scientists assume that the hail cannon is useless, the problem was tackled again in Gross Höchstetten. The municipal council was instructed to carry out noise measurements again. But this time the farmer should pay for the report.

The farmer then announced that he could not pay for the noise assessment. Instead, he organized an information event about his shock wave projectile. Thanks to crowdfunding, the Bernese then collected the 4,500 francs for the noise measurement.

Cannon should take “sensitive times of the day” into account

On Wednesday, the municipal council of the Bern municipality presented the results of the new noise assessment. This time the conclusion is: The hail gun largely complies with the applicable noise protection requirements.

See also  "They fired me for being pretty": Saltillo employee goes viral on TikTok

The municipality then officially approved the use of the hail defense system. However, this includes operational requirements for “more sensitive times of the day”. The farmer can thus continue to defend his fruit in the fight against hail – if the system is actually of any use. (obf)