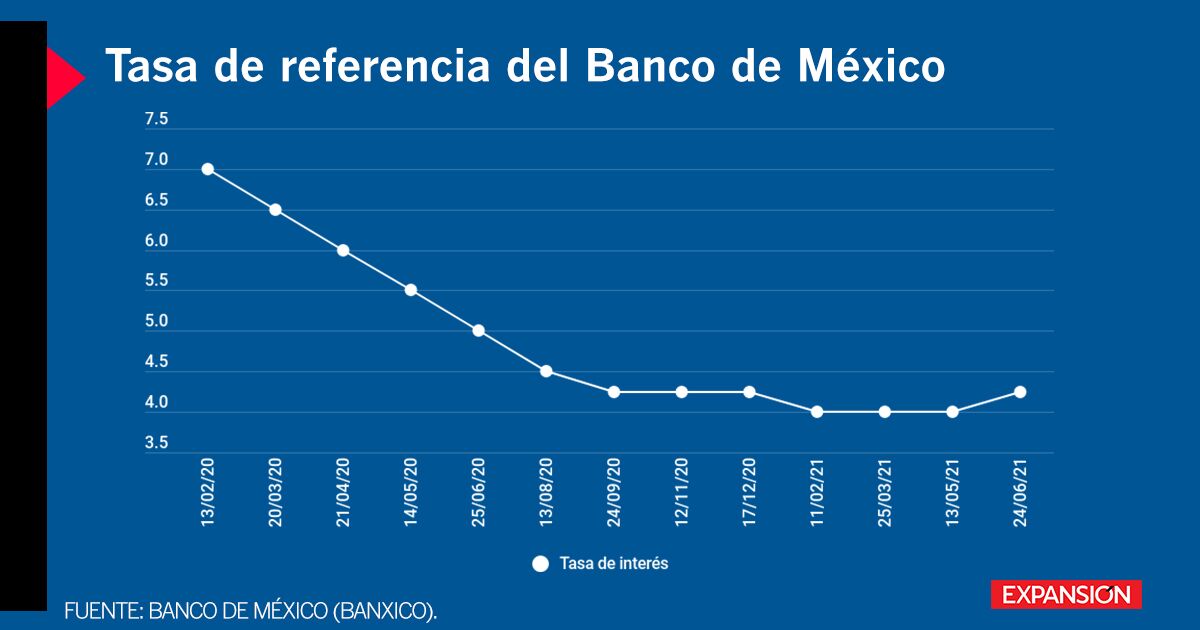 Gabriela Soni, Chief Investment Officer for UBS Asesores México, said that in the four remaining monetary policy meetings in 2021 there will be an increase of 25 basis points each, and there could even be a fifth adjustment in February 2022.

“25 basis points (bp) in August, then 25 bp in September with a risk that it could be 50 bp; then in November another 25 bp and in December 25 bp … and still for next year we expect another increase in February of 25 bp, then a pause of a few months and at the end of that year we see another two increases of 25 bp and what if we add everything in 2022 would lead us to close at 6% ”, he predicted in an interview.

The expectation for the constant increase in credit prices by Banxico is also shared by the former deputy governor of the entity Everardo Elizondo, who considered the restrictions “inevitable” given the persistence and vigor of inflation.

“Most likely, Banxico will continue to raise the interest rate by at least 50 basis points, but I think it could be up to 75 or 100 points by December,” he said during his participation in a webinar at EGADE Business School.

The former banker explained that if inflation picks up and Banxico does not take care of sending the signal that it is going to try to control it, it would send the wrong signal to the market, and that would affect inflation expectations.

Due to the low comparative base with the year of the crisis, it was foreseeable that inflation would be high last March and April, however prices have maintained their upward trend to reach 5.88% at an annual rate in June, a very distant figure of the official inflation target of 3% +/- one percentage point.

The latest Citibanamex Survey of Expectations considers that inflation will close the year at 5%.

Conditions are different now, the growth scenario for this year is more encouraging than the one had at the beginning of the year and inflation is at 6%, which is why it is necessary to adjust the monetary stance to avoid affect inflation expectations that remain anchored, considered the UBS board.

“The impression I have of the inflation data is that they are temporary pressures, mostly associated with the issue of the pandemic, obviously the magnitude of these shocks on consumer prices that have been greater than expected is very worrying, He said Adrián de la Garza, director of economic studies at Citibanamex.

The manager ruled out that in the following months Banxico decree increases of 50 bp in its interest rate, although he did estimate that there will be increases on two occasions in the remainder of the year.

Both Gabriela Soni and Adrián de la Garza expressed their doubts that the greater monetary restriction will have a negative impact on the recovery process of the national economy.

“Financial stability is needed. Let us remember that in Mexico there is an important issue of low credit penetration, many of the people are financed with unofficial methods. There are no such direct transmission channels,” said the UBS board of directors.

Surprisingly, Banxico announced on June 24 a 25 bp increase in your interest rate of reference to locate it in 4.25%, the decision caused discrepancies between the members of the Governing Board.

Deputy Governor Gerardo Esquivel said that the rate hike is a decision “hasty” and with possible counterproductive effects.

“I believe that the decision to increase the interest rate was hasty. Although it is true that inflation is significantly above the Central Bank’s target, it is also true that this is mainly due to base comparison effects and factors on the side of the offer, “said Esquivel, according to the minutes of the meeting.

“At this time it is difficult to make the evaluation and I believe that Banco de México will act cautiously. In the latest monetary policy statement, it seems to me that they make it look like this, by showing that they are indeed concerned about the magnitude and coverage that we already mentioned of these shocks in consumer prices, commented the Director of Economic Studies at Citibanamex.

The National Committee for Economic Studies of the Mexican Institute of Finance Executives (IMEF) changed its forecast for the Banxico rate at the end of the year.

“This is the perspective for the end of the year of the IMEF Committee, so there would be two more hikes, but obviously there is a lot of divergence; There are some who think that Banxico is going to have to raise the rate in the four remaining meetings, so it would remain at 5.25% and there are others who think that they will probably only have to raise it one more time, there is a lot of dispersion coming from the surprise that it made the central bank at the meeting last June ”, he commented Gabriel Casillas, president of this committee, in conference this Tuesday afternoon.

With information from Dainzú Patiño