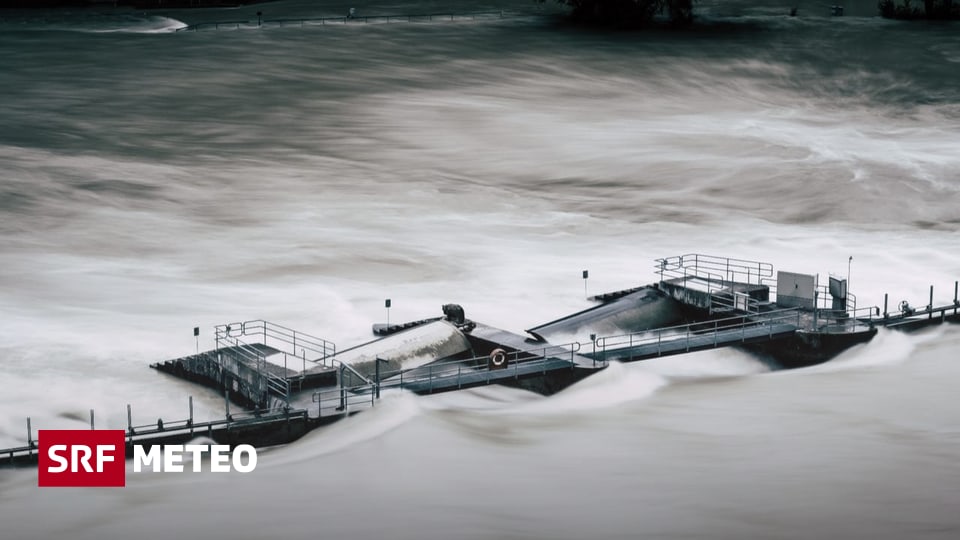 After the heavy rains of the last few days, from Saturday to Sunday in the east again up to 30 millimeters of rain fell. The flood situation remains tense. Although the levels of Lake Lucerne, Lake Biel and Lake Thun are falling, they are currently still at level 5.

If you take the total precipitation from Monday evening to Sunday noon, you also get to almost 200 millimeters in places on the north side of the Alps. The most rain was in Les Avants / VD with 193 millimeters of rain, but also in La Valsainte / FR, on the bowl and on the saddle / SZ, more than 180 millimeters of rain were measured. However, more rain fell in the south. In Robiei, in Val Bavona, the total was even 221 millimeters.

The greatest amount of rain was on Tuesday. In Mosogno in the Onsernone Valley, 156 millimeters were measured in Robiei 155 millimeters. But there was also more than 100 millimeters in places in the canton of Uri, such as on the Gütsch and Göscheneralp. However, if you compare the values ​​with the values ​​from the storm regions abroad, the daily values ​​on the north side of the Alps are significantly lower. In Cologne, the 24-hour total was 153 millimeters and in Kufstein in Tyrol, 118 millimeters were recorded from Saturday to Sunday.

On the night of Sunday again rain

Especially in the night from Saturday to Sunday, heavy rain fell again, especially in Eastern Switzerland. In Starkenbach in Toggenburg it was again more than 30 millimeters from Saturday noon to Sunday noon, and almost 30 millimeters were also measured in the St. Gallen Rhine Valley. On the night of Saturday and Saturday, more rain fell, especially in central and eastern Switzerland. In the Zürcher Oberland and Toggenburg area in particular, it was up to 15 millimeters at that time. In general, the rain decreased compared to the previous days. On Friday, another 58 millimeters of rain were measured in the Sattel / SZ region. In general, the largest amounts of rain fell on Friday in the cantons of Schwyz, Glarus and around Lake Walen, at 20 to 40 millimeters. Otherwise there was mostly 10 to 25 millimeters of rain along the foothills of the Alps and the northern Alps, in the Central Plateau it was 5 to 10 millimeters with a few exceptions. Northwestern Switzerland was also hit again on Friday afternoon and evening. In Basel, 20 millimeters of rain fell within around 3 hours. In neighboring Lörrach in Germany, the downpours caused local flooding, similar to Thursday evening in the canton of Schaffhausen.

The soils are saturated due to the numerous and intense rainfall, and even small amounts of rain can continue to lead to landslides. The water levels are still dangerously high in many places, but were generally falling on Sunday. It applies to several lakes in Switzerland, as well as to some rivers, great to very great danger. The current information can be found on the one at the Federal Office for the Environment.

The first thunderstorms formed over Switzerland on Monday evening. On Tuesday night they spread further east and were sometimes very violent. A gust peak of 135 kilometers per hour was measured in Egolzwil / LU. The thunderstorms raged particularly hard in the Zurich area, where the heavy rain and squalls led to numerous damage. Above all, the large amounts of rain in a short time were impressive. In Waldegg / ZH, 31.1 millimeters were measured in just 10 minutes.

It was still wet a lot on Tuesday. Other strong thunderstorms also moved across the country from the south. Huge amounts of rain fell in western Ticino. In Robiei in Val Bavona it was 209 millimeters within 24 hours, in Bosco / Gurin and in Mosogno 182 millimeters. After Wednesday was a little quieter, there was again widespread precipitation in the night on Thursday, and on Thursday during the day again intensive precipitation in some areas.