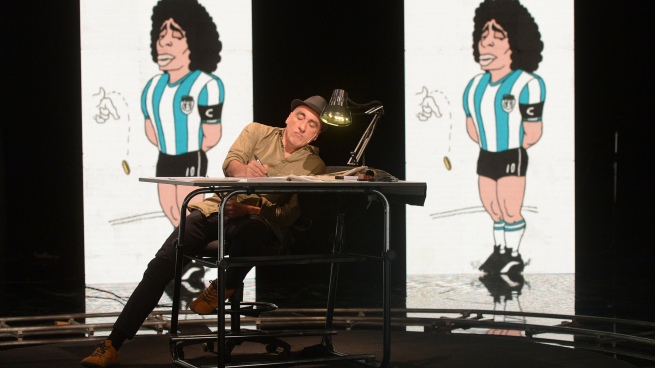 The makers of the award-winning public media programs at the recent edition of the New York Festivals, which rewards radio and television content from around the world, appeared on Friday at the International Book Fair to talk about the thematic approach and the content production process.

“Memory and truth are disputed territories. Preserving documentation, telling who we were to build, who we are and who we are going to be, is fundamental. That is why Radio Nacional and Televisión Pública are custodians of the most important archives in a country that has had cyclical destruction of its past,” he said during the talk Gustavo Campana, journalist and deputy director of Radio Nacional.

The meeting organized by Radio and Television Argentina (RTA), which took place from 6:30 p.m. yesterday in the Domingo Faustino Sarmiento Room of the venue set up in La Rural, also It was attended by Miguel Rep, Ezequiel Fernández Moores, Camila O’Donnell and Alejandro Stilman, moderated by Juan Ballesteros.

After their award-winning stage at the New York Festivals, the guests they talked about National Radio documentary “Game of empires. Malvinas 1982: Colonized by the dictatorship”the miniseries “FIFAGate, for the good of football“, the animated shorts “Pioneering Spirit” and the program “Diego Maradona, born to annoy“, premiered through the screen of Public TV.

All of them were distinguished in the aforementioned international contest that recognizes excellence and innovation, and in which productions from more than 50 countries from networks such as Qatar’s Al Jazeera, Brazil’s O Globo, media from the United States, Australia, Turkey, Canada, the United Kingdom, Germany, Singapore, China and Spain, among others.

in the opening, O’Donnell noted that the programs were product of “teamwork”, while Campana rated them as “examples of what a public medium can do, which is to leave testimony”.

“The main thing is to have a good story and then choose the right words. In this documentary we were able to say Coca Cola, Adidas, Switzerland, the United States, all the forbidden words when talking about FIFAGate, because it was very easy to say ‘the thieves were some Latino leaders’. Who corrupted those leaders?”, Reflected Fernández Moores, one of those responsible for the miniseries about the biggest scandal of the International Federation of Associated Soccer.

While, Alejandro Stilman He maintained about “Game of empires”, centered on the Malvinas, that “listening to the word recorded in the testimonies is a double listening, of the concept, of what is said, and of how the words of those who spoke sound, who were the ex-combatants “.

“It allowed us to defeat BBC radio in London”, joked Stilman after assuring that it was a “moving” experience, and highlighting the work of the team behind the documentary, made up of Quique Pesoa, Fabián Panizi and Liliana Manna .

The awards at New York festival

The group of filmmakers presented themselves after a notable stint at the New York Festivals, in which “game of empires Malvinas 1982: Colonized by the dictatorship”, which premiered last November 20, won the gold award in the Historical Documentary category.

“FIFAGate, for the good of football” -the first co-production of RTA and Channel 13 of Mexico-, “Pioneering Spirit” and “Diego Maradona, born to bother”, for their part, won the silver statuette in different categories of the Miniseries and Special TV Show sections. interviews, respectively.

The first one is a six-part documentary series in which journalists from Argentina, Mexico, Brazil, the United States and England, among other countries, narrate the development of that famous corruption scandal that broke out in 2015; and marked the milestone of being the first joint work of two Latin American public media organizations.

The shorts of “Pioneering Spirit”which was launched to coincide with the celebration of 70 years of Public Television in October last year, are narratives of fictional stories that show the contribution of pioneers in the field such as Jaime Yankelevich, Nicolás del Boca, Pinky, Nelly Prince , José Cibrián and Ana María Campoy, Alberto Olmedo and Nelly Trenti.

By last, “Diego Maradona, born to annoy”was a special program to remember the greatest star of Argentine soccer, in which Miguel Rep spoke with well-known personalities from the country to reflect on his personality from the sensations triggered by drawings made especially for the cycle.