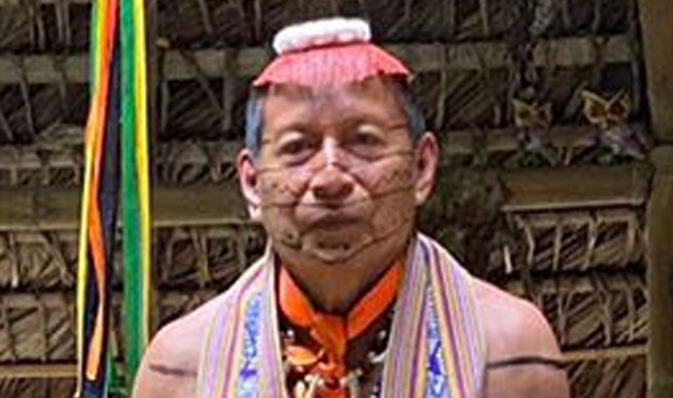 Augusto Calazacón is the custodian of tsáchila cultural knowledge and medicine

The shaman, Augusto Calazacon, has been dedicated to studying the medicinal plants of the Tsáchila Nationality, for 55 years.

In the woods of his commune Chigüilpe, in Santo Domingo, has found 373 plants with healing properties. And he has traveled to the Coast and the Sierra to see another type of vegetation and meet with the healers and shamans to exchange their knowledge.

In total, he has investigated 1,113 Ecuadorian plants. The last one was the achiote, which is sacred to the ethnic group. He traveled in 2018, together with the researcher David terero, to the Dominican Republic, where they did tests and discovered that it has antiviral properties, vitamins and that when combined with other seeds and roots it can alleviate the symptoms of polycystic ovaries.

Manuel Calazacon, Augusto’s brother, says that in this pandemic the shaman has prepared several natural remedies against the stress of confinement and to raise the defenses of the immune system of his patients.

“My brother has a theory that many illnesses stem from people’s moods,” he says.

Augusto practices what he preaches. He’s almost always smiling, says his son Alexander. He learns from his father the medicinal knowledge. Since he was 6 years old, he walked with his father through the tsáchila forest.

In those tours, Augusto told him how he prepared to be shaman.

His father, Liborio Calazacón, and his mother, Maria AguavilThey made him memorize the properties of plants since he was 3 years old. At 7 he was already heating the volcanic stones in a hole under the ground, to make box baths.

At 11 he saw his father do ceremonies, and since then he began to participate in them; first he was as an assistant and then he directed them. I was 20 years old.

After the death of his father, Liborio, assumed the leadership of the shamans of Chigüilpe.

Manuel Calazacón affirms that his brother has the title of poné o true shaman. That is, it is far from esotericism and only works with medicinal plants and the energies that nature provides. “There are false shamans who dishonor our worldview, which is to serve the sick.”

Nancy Calazacon, a neighbor of Augusto, affirms that the shaman has cured his children for free. “Whenever we need to, he attends us with a smile and we bring him a little gift when there is no money.”

For the governor of the Tsáchila Nationality, Diana Aguavil, Calazacón’s legacy is not only based on ancient medicine. For 40 years she has been working to rescue their culture and traditions.

26 years ago he founded the first ethnographic museum of the nationality. There the customs and history of the tsáchilas. Native crafts are made and shamanism is practiced. “They started calling us colorados. We did not know why, but we understood that we had to show who we were “, says his son, Henry Calazacón.

Miriam Calazacón is Augusto’s daughter-in-law, and is the founder of the Mushily cultural center. She says that her father-in-law motivated the young people from Chigüilpe to get involved in tourism, as a way to make the native culture visible. “This impulse was important for those of us who now make a living from tourism, because we have prepared and trained with more knowledge of our culture. We don’t lie to tourists ”.

Augusto has taught young people to sing the marimba, an instrument that he makes.

Together with the anthropologist, Oliverio Guevara, wrote the first dictionary in the native language tzafiki. The book is used by tourists and students of intercultural bilingual education. Currently he has worked on 32 publications about this town, which lives in seven communes.

He has also worked in the management of works for the nationality, despite the fact that he has not held a position in the Government.

The historian, Juan Carlos Pena, says that he was the right hand of miya (governor) Abraham Calazacón.

They succeeded in getting the State to legalize 10,500 hectares for communal lands on May 27, 1971. On that land the limits of eight communes were established.

Alexander says that one of his father’s sadness is that he has lost one of the communes. “The tsáchilas illegally sold those lands. For this reason, my father still fights so that this does not happen anymore ”.

Manuel remembers that his brother had long meetings with his uncle Abraham. Augusto was in charge of doing the trades so that the requests that the ethnicity made them. Those documents have allowed them to have a written record of the history of the last governor for life.

After Abraham’s death in 1981, he had to take over a job: the construction of a bridge that connected the Chigüilpe commune with the city.

He was born in the Chigüilpe commune in 1955. He is the founder of the Tsáchila Ethnographic Museum and a shaman certified by the Governing Council. He inherited the medicinal knowledge of his father, Liborio, and his uncle Abraham Calazacón. He has 12 children.