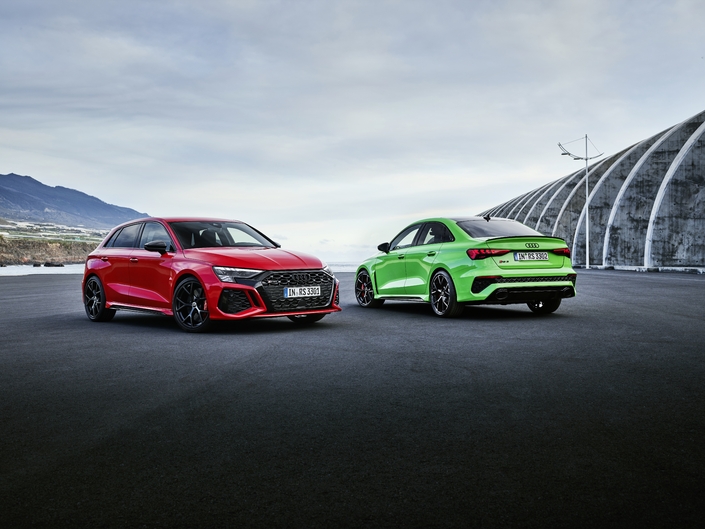 The last combustion engine Audi RS3 in history had to be hit hard. But if you were expecting a final bouquet full of explosions, light and color, you might be a little disappointed at first. Audi has renewed the five-cylinder 2.5 TFSI (EA855 Evo). A block which is nothing new, since its evolution dates back to the end of the 80s, but with important changes and often invisible at first glance over the generations.

The last iteration, named DNWA (after 2018/2019 restyling) almost seemed to be the confirmed copy of the DAZA version that we found on the first phase of the previous RS3. But appearances were deceptive (transmission, start of the exhaust line, intake manifold were among other things new).

On this new RS3, the EA8855 Evo block is again present, still at 400 hp. Without giving more details, Audi announces a maximum power reached a little earlier than before (at 5600 rpm) and above all a torque which climbs to 500 Nm (+ 20 Nm). Probably with work on electronic management, turbo or valve lift.

Another detail that is important: if the old RS3 had its 400 hp in real life, the restyling and the addition of a particulate filter and more pollution control slightly reduced the power, in the closer reality of 380 hp.

This RS3 thus refines a magic recipe, while improving everything that could be. Starting with braking! The big black point of the old version, with discs that heated quickly, and poorly designed heat dissipation (then rectified later with a very simplistic solution).

This time, Audi seems to have taken the remarks to heart. The 8 piston calipers give way to new larger six piston calipers. And Audi assures us: “its ventilated and internally drilled discs measure 375 by 36 mm at the front and 310 by 22 mm at the rear. They are therefore taller and wider than on the previous model. Airflow control elements improve brake cooling time by 20%. This allows temperature peaks to be reduced more quickly during hard braking, while maintaining the same feel to the pedal. In addition, it also reduces wear on the brake pads, which are 15 percent larger and copper-free.“. Of which act. We should also mention the presence of the optional carbon brakes, which will go perfectly with the semi-slick tires. The latter are entering the catalog for the first time on the RS3.

For the rest, it’s ultimately a great classic. The interior is quite similar to that of the new S3, even if it is obviously distinguished by many small details (RS badges, specific display on the Digital Cockpit, special driving modes). The famous Drift mode will make it possible to activate the management of the specific torque on the outer rear wheel in order to send the stern drifting more easily, and especially to maintain it. This is made possible by the brand new rear differential which incorporates two multi-clutch clutches independently managing the wheels. And Audi showed it in video, the new RS3 holds up well in drift.

The most expressive compact sedan of the moment (which gets an all-new fully variable valve exhaust) will be available to order from mid-August. Count € 70,000 for the Sportback and € 71,000 for the sedan, without options … and the penalty of € 30,000. You will therefore get by over 100,000 €. This is the price for having the last five-cylinder engine car before going silent.