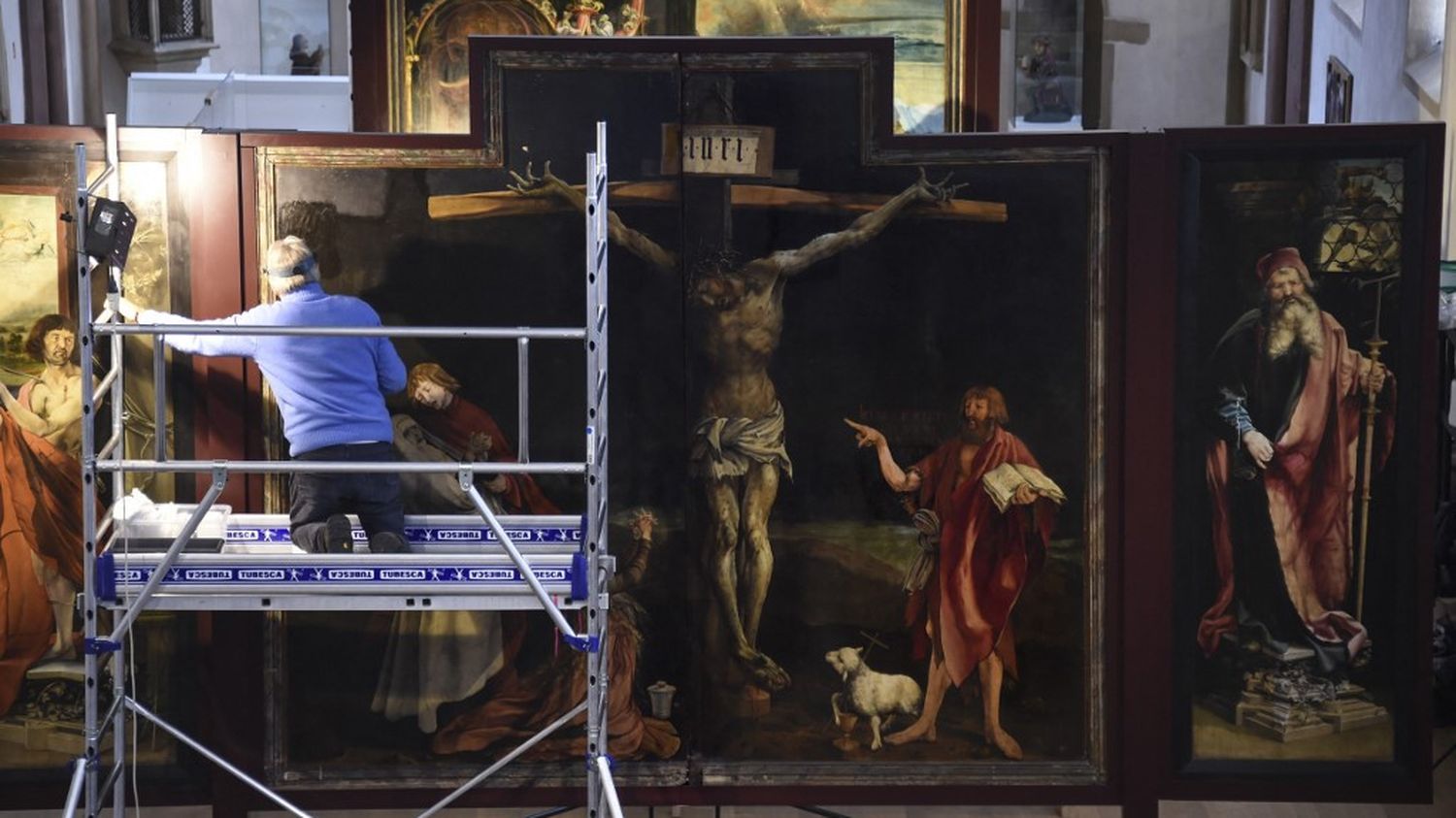 At the Unterlinden museum in Colmar, the Altarpiece of Issenheim has regained all its splendor

It is a mythical work, which attracts art lovers from all over the world: at the Unterlinden museum in Colmar, the Altarpiece of Issenheim has regained its original brilliance, thanks to the work “colossal” carried out by a team of restorers. In the former convent transformed into a museum, visitors can observe the final alterations carried out by Anna Brunetto, world specialist in laser restoration, leaning on the wooden frame of one of the paintings that make up the work and from which light wisps of smoke rise.

With his blouse and his thick protective glasses, Anna Brunetto progresses, millimeter by millimeter, to remove the successive layers of paint added to the frame over time and restore the original colors. “The complexity is finding the balance between the parts you want to remove and those you want to keep.“, explains this 52-year-old Italian, who, during her career, notably contributed to revealing drawings by Leonardo da Vinci on the ceilings of the Sforza castle in Milan.

Around it are exposed the already restored parts of the Altarpiece of Issenheim, composed of ten paintings, presenting episodes from the life of Christ and that of Saint Anthony, and eight sculpted reliefs made between 1512 and 1516 by two great German masters. , Matthias Grunewald and Nicolas de Haguenau. “There is the Sistine Chapel, there is the Mona Lisa, and there is the Altarpiece of Issenheim: it is a primordial work. I place it at the same level for its dimension and its impact“, exhibits Pantxika de Paepe, the director of the Unterlinden Museum.

The masterpiece had suffered from layers of varnish deposited successively, darkened or yellowed over time, and manipulations carried out during the French Revolution as during the two world wars, to put it under cover, which altered the frames. and basswood supports.

After several superficial operations, until the last carried out at the beginning of the 1990s, a complete restoration was essential. It took place over more than four and a half years, mainly within the confines of the museum, but also in Paris (for the sculptures) and Vesoul (certain frames). A renovation that cost 1.4 million euros, 80% funded by sponsorship.

“It was a very meticulous exercise. To see the thinning of varnishes, to rediscover certain planes, colors, depths, contrasts, it’s marvelous“, enthuses Pantxika de Paepe. On the panels of The Crucifixion, “we find for example the hair of Marie-Madeleine, whereas we did not see it before, it was masked by the varnish“, which had become opaque.

The restoration mobilized two teams, 10 people in charge of the sculptures, under the leadership of Juliette Lévy, and 21 for the paintings, led by Anthony Pontabry, who expresses his satisfaction with the extent of the work accomplished. “There’s five centuries of patina on the paintings, so there’s a slight color metamorphosis, but I think we’re very, very close to what Grunewald did“, maintains this 75-year-old restaurateur, who looks 15 years younger and thus ends his career, which began in 1972.

The visitors themselves do not hide their satisfaction at rediscovering the intact brilliance of a five-hundred-year-old work. “I find it quite fabulous“, concedes Sébastien Raimond, professor of right of way in Colmar. “We have the impression that the colors are bursting, it’s amazing, we feel the work of precision, goldsmith almost“. “I don’t know of a more impressive picture of the Resurrection“, assures Béatrice, a 68-year-old German who came specially from Stuttgart to contemplate the work, and who says her impatience to see the last missing panels of new exhibits.

To meet public demand, a cycle of conferences, given by Anthony Pontabry and relating to restoration operations, is organized every Friday from May until the official inauguration, scheduled for June 30.