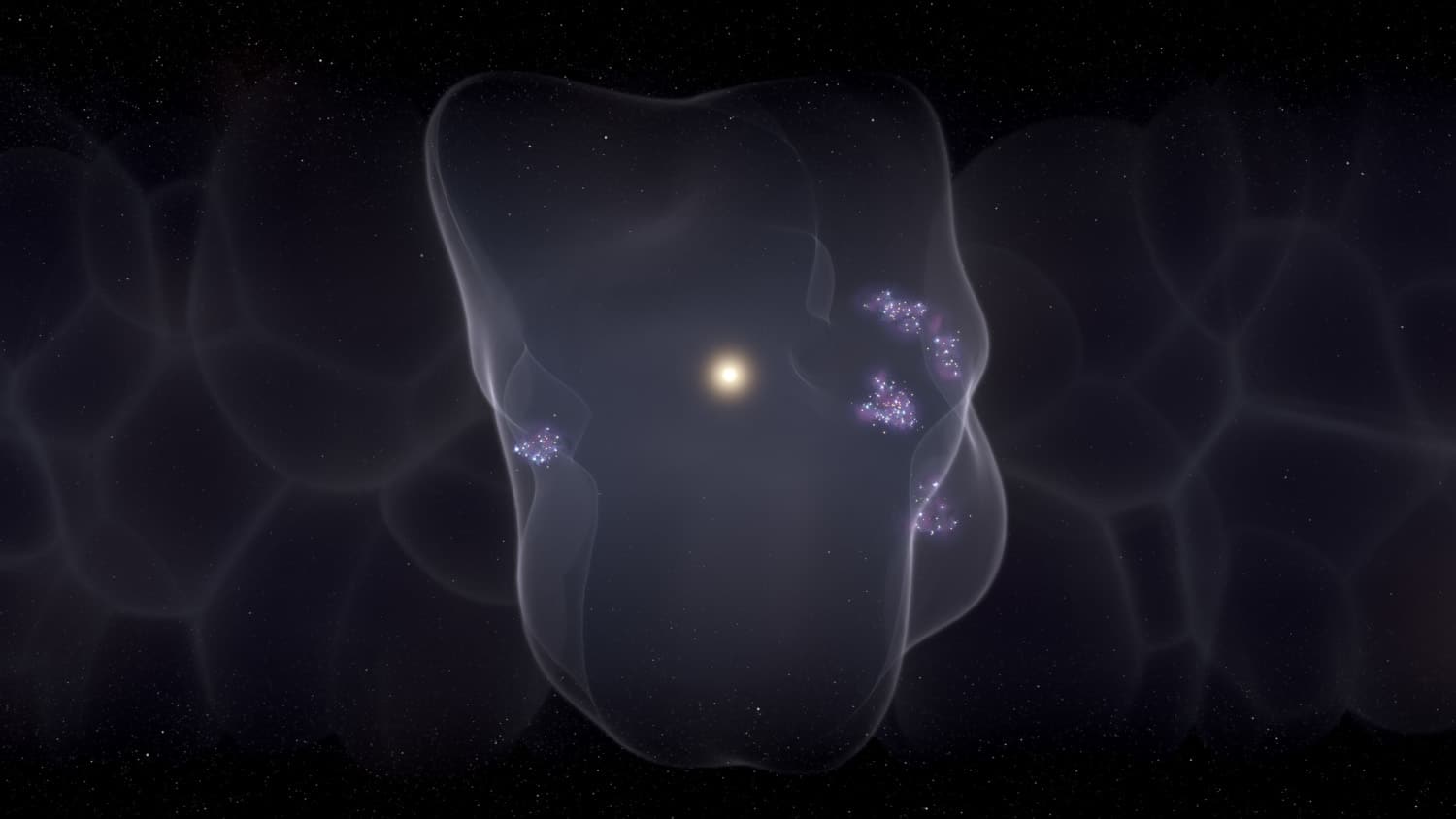 Our solar system is inside a galactic region called a local bubble, a low-density, high-temperature plasma cavity surrounded by gas and dust. The exact shape and boundaries of this bubble, as well as its involvement in the formation of nearby stars, have until now been uncertain. A team of astronomers led by the Harvard & Smithsonian Center for Astrophysics now offers a very detailed 3D mapping of the interstellar local bubble, retracing the history of our galactic neighborhood.

Our planet lies in an interstellar void some 1000 light-years wide, called a local bubble, surrounded by thousands of young stars. If its existence has been known for decades, the origin of these stars located exclusively on the periphery remained a mystery for scientists. But using new data analysis techniques, researchers have designed a space-time animation of the local bubble, which lifts the veil on the birth and evolution of this particular region of the Milky Way.

The animation, which is the subject of an article published in Nature, indeed reveals that a series of supernovae, initiated approximately 14 million years ago, is at the origin of the formation of the local bubble hosting our solar system; these star explosions would also have created favorable conditions for the formation of new stars on the edges of the bubble. ” We calculated that around 15 supernovae fired over millions of years to form the local bubble we see today “, specifies in a press release Catherine Zucker, astronomer at Space Telescope Science Institute.

Stars born on the surface of the bubble

This is thanks to data from the European Space Agency’s Gaia space observatory and visualization software Glue, which scientists have been able to reconstruct and observe, for the first time, the entire process of star formation located “near” our planet, about 500 light-years away.

The team explains that the force released by the supernovae probably pushed the interstellar gas outwards, naturally creating a vacuum at the borders of which material accumulated, conducive to the birth of new stellar bodies: dense nodes of molecular gases eventually collapsed under their own gravity, giving birth to new stars. To simplify things, Alyssa Goodman, an astronomer at the Center for Astrophysics, co-author of the study and founder of Glue, conjures up the image of Swiss cheese: imagine the holes being dug by supernovae, and new stars emerging. form in the remaining cheese around these holes (and nowhere else).

Luckily, we have a front row seat to study the local bubble, because we are almost right in the middle! The history of the local bubble began 14.4 million years ago, with a phase of star production; though the Sun was a long way from the phenomenon when the first supernova erupted, its “journey” through the Milky Way eventually led it into the bubble some five million years ago, and it is today almost in its center.

50 years ago, astronomers speculated that such interstellar bubbles were relatively common in our galaxy. However, this had never been proven. For Alyssa Goodman, from our privileged position, there is no longer any doubt that these bubbles exist in large numbers: “ What are the odds that we’ll be right in the middle of one? Statistically, the Sun is very unlikely to be centered in a giant bubble if such bubbles are rare in the Milky Way. “, she explains.

Other mapping projects to come

No less than seven distinct star-forming regions lie on the surface of the local bubble, the researchers report, among them the Taurus molecular cloud, which had previously been the subject of an article in The Astrophysical Journal Letters in 2021; researchers already suspected ancient supernovae, which occurred nearly 10 million years ago, to be the source of this real star “factory”.

The data also made it possible to calculate the speed of expansion of the bubble: it continues to expand slowly, at just over 6 km/s; however, its activity and speed are less sustained than in the past. Its radius is currently about 538 light years.

Since there are almost certainly other interstellar bubbles like ours, the team now plans to map them in the same way, to get a full 3D view of their location, shape and size. . To do this, researchers will be able to rely on the next round of data from Gaia, which is expected to be published in the second quarter of 2022.

Mapping the bubbles and their possible interconnections in this way will allow astronomers to understand the role played by dying stars in the birth of new stars, as well as in the structure and evolution of galaxies like the Milky Way. These interstellar bubbles could ultimately be essential for the birth of stars such as our Sun.

This video, provided by the Center for Astrophysics, perfectly illustrates the discovery: