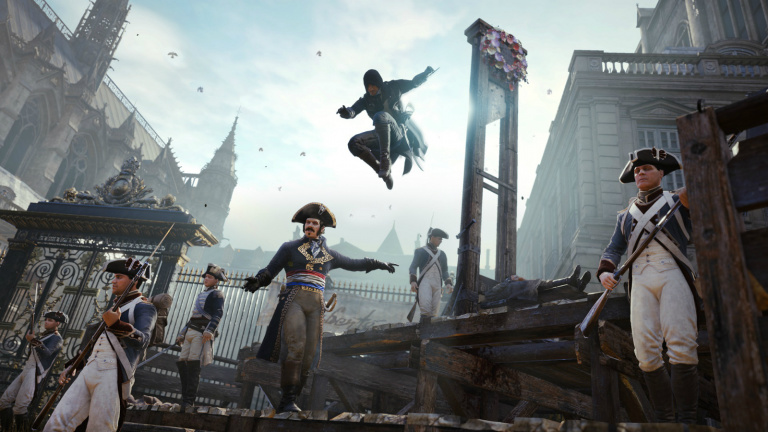 Assassin’s Creed: the 10 most remarkable assassinations of the series of Ubisoft

Game news Assassin’s Creed: the 10 most remarkable assassinations of the series of Ubisoft

Ubisoft’s flagship license celebrates its 15th anniversary this year. And who says Assassin’s Creed, says assassination. We invite you to come back to ten of the most striking assassinations of the franchise.

One opus = no more than one assassination

Difficult to sort through all the assassinations that the twelve games of the main license have offered us. To make it easier, we therefore decided not to offer several assassinations from the same opus. Note that the following contains spoilers of some important storylines from the Assassin’s Creed games.

Let’s start at the beginning with the very first opus of the license, Assassin’s Creed. So we find this dear Altaïr who, after having fulfilled his mission by executing the targets entrusted to him by his master, learns that the latter has betrayed the Brotherhood. In order to get his hands on the Apple of Eden, he indeed joined forces with the Templars. If Al Mualim wants to see some Templars dead, it’s not for the good of the Brotherhood but to make sure they don’t try to steal his Apple of Eden. Artifact he once used to hypnotize the people of Masyaf when Altaïr joins him at the end of the game. He then confronts his former mentor and, after a long fight, decides to kill him. The symbolism makes this assassination one of the most significant in the series and it is following this event that Altaïr becomes the new Mentor of the Brotherhood, a historical figure whose legacy feeds the whole license.

The choice was tough to determine what was the most significant assassination of Ezio’s first steps in the brotherhood of Assassins in Assassin’s Creed II. We of course thought of the assassination of this arrogant Vieri de’ Pazzi whom we loved to silence forever (just like his father). But it was on Uberto Alberti that our sights fell. After the execution of his father and brothers, Ezio has only one thing in mind: find the one who betrayed his father’s trust and make him suffer his wrath. Stabbed many times in the chest by someone who is not yet an Assassin, Uberto Alberti succumbs before our satisfied eyes. Then follows a tirade from Ezio tinged with aggressiveness and strength marking the beginning of his fight against the Templars: “The Auditore are not dead. I’m still there. ME ! Ezio! Ezio Auditore!”

This one is a little bit special. First, because you are a mere spectator. Second, because it does not take place in a past recreated by the Animus but in the present. After finally locating the Apple of Eden, Miles, Lucy, Rebecca, and Shaun travel to the secret entrance to the Colosseum in Rome to retrieve it at the end of Assassin’s Creed: Brotherhood. Desmond soon begins to have visions of the goddess Juno, a prominent member of Those Who Were There Before, warning him. He still chooses to take the Shard of Eden. Immediately, his body no longer belongs to him and he stabs in spite of himself the one who has been his closest ally all this time. This dramatic gesture will allow him to pass the door and discover the coveted truth. This death is as unexpected as it is important to understand the whole intrigue around the First Civilization, even if today this assassination still retains a part of mystery. This is why it is so striking.

Little Ezio has grown up a lot since Assassin’s Creed II. It is as Mentor of the Brotherhood of Assassins found in Assassin’s Creed: Revelations. If he has certainly aged, the most popular Assassin of the license has especially gained in charisma and tenacity. Even wounded, he pursues Leandros, Templar captain in charge of opening the door of the Library of Altaïr Ibn-La’Ahad in Masyaf. If Leandros is not really the most striking antagonist of this episode, he allows our Ezio to make a remarkable entrance. The perseverance and the cold charisma of the old Assassin make this assassination one of the most striking of this trilogy. The tone is directly set for the rest of the episode.

See also  Lara Croft and the Guardian of Light & Temple of Osiris: Switch versions back to 2023

If the death of Charles Lee in Assassin’s Creed III is so striking, it is not because it is satisfying, on the contrary. However, any player who played this dear Ratonhnhaké:ton/Connor ardently wanted the death of this veteran of the Seven Years’ War. Great antagonist of this opus, he crosses paths with Ratonhnhaké:ton for the first time when the latter is very small. Choking him for information, the young Kanien’kehà:ka tribesman then promises to find him. And that’s good, since his future position within the brotherhood of Assassins will place him in Lee’s way on many occasions. It is finally in front of a weak and resigned man that our Assassin will find himself. When he plunges his secret blade into his heart, the satisfaction is not as expected. Killing a man who is already dead does not have much flavor in the end, despite a hunt for several years.

If there is one opus that has taken an interesting turn, it is Assassin’s Creed Rogue. It embodies indeed Shay Cormac, a former Assassin who joined the ranks of the Templars after a tragic accident. From now on, our man becomes a particularly prolific killer of Assassins, executing characters present in other opuses (Adewalé, Charles Dorian…) but also his former companions, Liam and Hope. The assassination of the latter is particularly striking. Besides the pleasantly powerful run over the rooftops, the scene of his death is very moving. After puncturing her abdomen, Shay expresses regret, sad to have had to kill the one who taught her so much. “I trained you for this. You did not disappoint me” she replies before succumbing to her injuries.

If the Assassin’s Creed opus taking place during the French Revolution (Assassin’s Creed Unity) is not really the most appreciated, there is one thing that cannot be taken away from it: his equally satisfying assassination missions. Among them, it is the one targeting Charles Gabriel Sébastien Sivert, a former soldier and French colonial administrator and of course a member of the Order of the Templars, who particularly marked us. It must be said that the simple fact of traversing the Cathedral of Notre-Dame in all discretion to assassinate a vile Templar constitutes a most appreciable moment. But then, if you had the patience to reach the confessional, the satisfaction is all the more beautiful. See Sivert open up unsuspectingly about his misdeeds and the Order before stabbing him in the face, That’s an assassination according to the rules of the art.

Assassin’s Creed Syndicate is even more unloved than its predecessor. But just like him, he delivered us a good package of original assassination approaches to put an end to the life of real garbage. John Elliotson was one of them. Because of its tonic which made seriously ill the London workers who ingested it, it almost caused the death of the young Clara O’Dea, ally of our Assassins Evie and Jacob. To put an end to the actions of this unscrupulous doctor, he infiltrates the faculty of medicine. There, he slips into a stretcher so he can approach the Doctor up close in the middle of one of his presentations. A stab in the face is enough and that’s the end for this cowardly charlatan. The least we can say is that Jacob is an Assassin with a sense of showmanship.

See also  80% failed the riddle – Teach me about Science

If they are of a different genre than those of the historical episodes of the franchise, the assassination animations of Assassin’s Creed Origins are of great beauty. Between mysticism and quest for revenge, they exude a striking and almost bewitching rage that probably did not leave you indifferent. Whether it’s opening the game with the assassination of the Heron or the macabre one of Medunamun, many of them have left their mark on the players. But since we can only choose one, it is on the assassination of the Crocodile that ours is focused. It must be said that snatching the life of the woman who caused the life of young Shadya with her hands is very satisfying. Add to that Bayek’s calm, cinematic aesthetics, and vengeful symbolism and you’ve got one of the franchise’s most memorable assassinations.

In Assassin’s Creed, the most satisfying assassinations are often those that relate to our character’s story. Revenge is a dish that is eaten frozen in the franchise of Ubisoft, and its taste is even more remarkable. If we could have told you about the well thought out and visually successful assassinations of the DLC The Siege of Paris, we could not miss the happiness that was the death of Fulke in the base game Assassin’s Creed Valhalla. After chasing after her over the missions and risking seeing her escape again, taking her down in this rather memorable fight is one of the most satisfying victories of this opus. There follows an enigmatic cinematic, tinged with madness and fantasy, which has something to mark the spirits.

And you? Which assassination marked you the most?