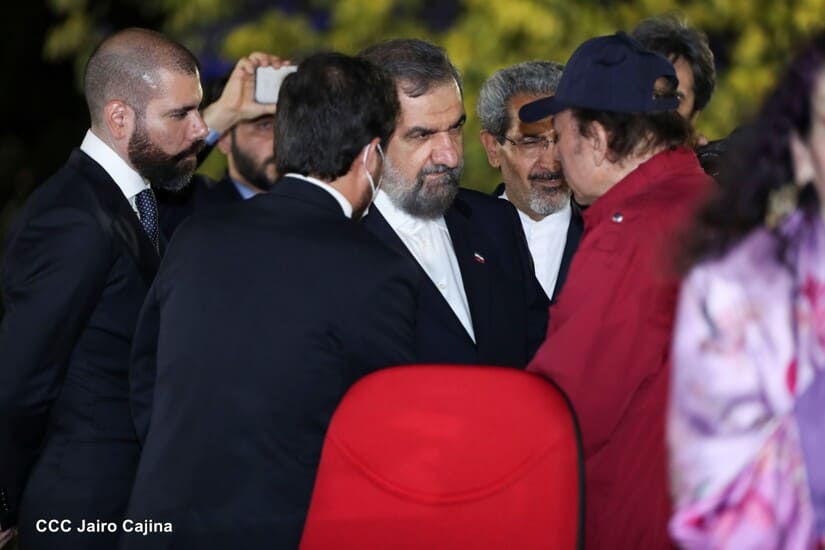 The Argentine government, led by President Alberto Fernández, protested and condemned the presence of Iranian Mohsen Rezai during Daniel Ortega’s inauguration in Nicaragua. Rezai is one of those accused by the Argentine justice for the attack that occurred in 1994 against the Jewish mutual Association Israelite Mutual Association Argentina (AMIA) of Buenos Aires, as a result left 85 dead whose cases remain unpunished.

“The Argentine Republic expresses its strongest condemnation of the presence of Mohsen Rezai at the inauguration of the President of Nicaragua, Daniel Ortega,” says a statement issued by the Foreign Ministry of the South American country.

Also read: Ortega says “clean slate”, calls for the release of “political prisoners” in the US, but is silent about those in Nicaragua

The Argentine government pointed out that Rezai is vice president of Economic Affairs of the Islamic Republic of Iran and that his presence in Managua constitutes “an affront to Argentine justice and to the victims of the brutal terrorist attack against the Argentine Israelite Mutual Association (AMIA), committed on July 18, 1994 ».

The Ortega deputy Wilfredo Navarro was the one who was responsible for introducing the «guests of Ortega», when the time came to introduce Rezai, he announced him as «from the Islamic Republic of Iran, the vice president of economic affairs, brother Mohsen Rezai and the members of your delegation ”. Rezai stood up to salute, as Ortega fans applauded his presence.

At the end of Ortega with his counterparts Nicolás Maduro, from Venezuela; Miguel Díaz-Canel; and Rezai were photographed and even made the sign for number two, the Sandinista National Liberation Front (FSLN) booth.

Ambassador of Argentina was present

The Argentine ambassador to Managua, Daniel Capitanich, was present during Ortega’s inauguration on Monday, January 10. Sources from the Argentine Foreign Ministry told Infobae that Capitanich was unaware that Rezai was going to be in Managua and that is why he did not denounce the presence of the Iranian before the Nicaraguan justice, as provided in the agreement with the International Criminal Police Organization (Interpol for its acronym in English) and because a red alert hangs over the official.

“He was in another guest section, he never saw it; he found out from Infobae what had happened “, they admitted to the question of this medium. It should be noted that Nicaragua is part of Interpol and did not detect or did not want to order his arrest when Rezai entered that country.

The presence of Capitanich in the same scenario where the Iranian was probably will complicate the relations of both countries. The opposition in Argentina reacted immediately to such an embarrassing case and asked Foreign Minister Santiago Cafiero to be questioned in Congress for his explanation.

Waldo Wolff, PRO deputy, expressed on his Twitter account that “in the presence of our foreign ministry in the act in which the accused was officially present by our justice for the attack on the AMIA with an international arrest warrant, we will be presenting a request for urgent interpellation to Foreign Minister Santiago Cafiero ».

Along the same lines, the parliamentarian and president of the PRO party, Patricia Bullrich, spoke out and pointed out “The price of supporting dictatorships! Capitanich, in the inauguration of Ortega in Nicaragua, together with an Iranian defendant for the attack on the AMIA, with a red alert from Interpol.

He stressed that Capitanich ignored the alert: «We fought for 4 years to maintain those alerts and now they ignore them. The Memorandum was a tool of impunity, “he wrote on his Twitter.

Argentina demands its cooperation from Iran so that Mohsen is tried

Immediately, the Fernández Administration demands once again from the government of Iran its full cooperation with the Argentine justice system, “allowing the people who have been accused of participating in the attack against the AMIA to be tried by the competent courts,” the text adds. .

DAIA repudiates the participation of Capitanich

Along the same lines, the Delegation of Argentine Israeli Associations (DAIA) through a statement published on the Twitter account repudiated the participation of Capitanich in the public act where Rezai was.

«It is absolutely inadmissible and worrying that Ambassador Capitanich has supported with his assistance and passivity a criminal act such as the presence of an accused by the Argentine justice, with a request for the arrest of Interpol in relation to his participation in the terrorist attack in Buenos Aires Aires on July 18, 1995, without demanding his immediate arrest, “the statement reads.

He regretted that the Argentine Foreign Ministry had not “filed any complaint or requested the Nicaraguan government to activate the mechanisms for Interpol to proceed to capture Rezai, also considering that the ambassador cannot allege ignorance regarding the presence of the Iranian diplomat.”

Argentine opposition: “Another injury to memory”

Through a joint statement, the Argentine opposition and deputies from Juntos por el Cambio (JxC) urgently summoned Foreign Minister Santiago Cafiero to explain what happened in Nicaragua, where the Argentine ambassador, Daniel Capitanich, shared the stage with Mohsen Rezai, accused of terrorism for the AMIA attack and wanted by Interpol.

«As a result of the participation of the accused by the attack on the AMIA, Mohsen Rezai in a diplomatic act with the Argentine ambassador in Nicaragua, Daniel Capitanich, we urgently summon the presence of the Ministry of Foreign Relations, International Trade and Worship, Santiango Cafiero, to give explanations about what happened, “they said.

The Argentine opposition qualifies this action as “another injury to memory” and maintains that it is “unacceptable and inadmissible that Interpol’s red alerts have been ignored and that the representative of the Argentine government has not denounced the presence to the authorities. of the Iranian ministries ».