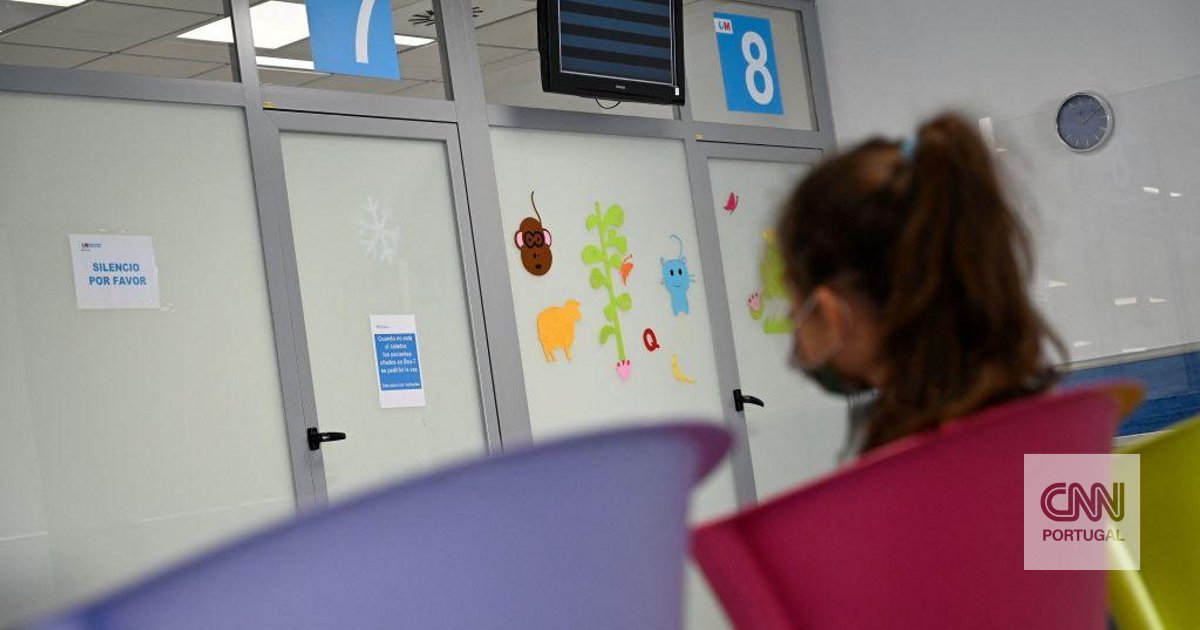 Are cold viruses causing severe hepatitis in children? What you need to know about adenoviruses

Virologist Celso Cunha admits “skepticism” about the possibility of an adenovirus causing severe hepatitis of unknown origin that has already affected almost 200 children worldwide, caused one death and forced 17 liver transplants. Pediatrician Manuel Ferreira de Magalhães recalls that adenoviruses are common at this time of year and usually cause conjunctivitis or gastroenteritis, mild and self-limiting diseases

The hypothesis was advanced by British experts: the adenovirus could be the cause of acute hepatitis of unknown origin that has already been detected in almost 200 children in several European countries and the United States.

According to information released during the Congress of Microbiology and Infectious Diseases, which took place in Lisbon, the most recent data suggest that an adenovirus strain called F41 is the most likely cause of this liver inflammation that mainly affects children under ten years old. , although other possibilities are also being investigated, namely whether the confinements of the pandemic and covid-19 have not weakened the immune systems of the youngest, leaving them more vulnerable to diseases that, in other situations, would not have serious repercussions.

But adenovirus is not normally associated with liver inflammation. “It’s a type of virus that has the genetic material in a single DNA molecule. There are several types of adenovirus and they can infect different organs with very different pathologies”, explains Celso Cunha, virologist at the Institute of Hygiene and Tropical Medicine at Universidade Nova de Lisboa. . “The most frequent pathologies, however, are those of the respiratory tract”, adds the specialist, who admits some strangeness in relation to the possibility of an adenovirus causing this severe liver disease in pediatric age.

“I don’t know what the suspicions are based on, I don’t know if genetic material from the virus was found or if antibodies were found, which are different things and give different clues”refers. “Furthermore, adenoviruses are very common and exist in all animals, they do not have great particularities or cause normally serious pathologies. They are viruses that circulate around and cause us to have colds from time to time”points out Celso Cunha. “The fact that they cause this type of hepatitis in children is a novelty, because adenovirus does not usually cause liver disease like this. But there is a lot of speculation.”says the virologist.

For Celso Cunha, the most unusual in cases of acute hepatitis that have been diagnosed in recent weeks is the number of transplants that have already had to be performed – 17 liver transplants in total, that is, in about 10% of the detected cases there was failure. total and irreversible liver damage. “It’s a total failure of liver function that sometimes happens in fulminant hepatitis, but these are relatively rare phenomena. Generally, liver transplantation is given in the case of hepatitis C or B, when there is chronic disease and the liver starts to degrade. if slowly, it goes from inflammation to cirrhosis and then to carcinoma. But it can take years to reach the transplant stage, especially nowadays, with better drugs for hepatitis C and for the control of hepatitis B”, says the specialist.

According to laboratory tests whose results were released by health authorities worldwide, none of the viruses associated with hepatitis (from A to E) were detected in children diagnosed with this acute hepatitis of unknown origin.

Genetic alteration of an adenovirus?

The possibility that there was a genetic alteration of an adenovirus strain, for example, can be raised, admits Celso Cunha. But he warns: “These DNA viruses do not have very high mutation rates as RNA viruses, such as coronaviruses, hepatitis C, HIV or influenza viruses, for example, which accumulate mutations and have the ability to to exchange genetic segments during replication inside the cell”, he emphasizes.

“I see with some skepticism that it could be something like this. First, it is necessary to establish concretely if the responsible is really an adenovirus. And, if it is indeed an adenovirus, I have also read that the cause of the diseases could be not only the virus but a weaker immune system. And that is possible”underlines the virologist.

“There are dozens of adenoviruses, they are very well studied viruses because with them we have made fundamental discoveries about the functioning of cells”, also highlights the specialist from the Institute of Hygiene and Tropical Medicine. But are they really the ones behind acute hepatitis in children? “Right now, and from what I’ve read in the press, I wasn’t betting,” he admits.

In a report released in the meantime, the World Health Organization also admits that the adenovirus, being one of the hypotheses, “does not fully explain the severity of the clinical picture”, even though the F41 strain of the adenovirus has been detected in many of the children with liver inflammation. – about 75% of English children, for example. “Although there are recorded cases of hepatitis in immunosuppressed children with adenovirus infection, adenovirus type 41 is not a known cause of hepatitis in healthy children,” the WHO document notes.

The WHO has also stressed that it has not found any relationship between cases of acute hepatitis in children and the vaccine against covid-19 or the consumption of any type of food or medication.

“The causes remain under in-depth investigation. We are looking at a number of underlying factors, infectious and non-infectious,” said Philippa Easterbrook, a WHO expert, at a press conference in Geneva on Tuesday.

Manuel Ferreira de Magalhães, a specialist in pediatric pulmonology, admits that, in his clinical practice, he has observed in recent months a large number of children with typical cases of adenovirus infections, but that “are in accordance with the normal seasonality” of the virus, assures. “Adenoviruses are viruses that we have in the community all year round and, naturally, they can cause disease all year round. But they reach a higher incidence in the winter and spring months, which is precisely the time when we are, and give various types of disease, respiratory or gastrointestinal”, says the pediatrician.

The most common diseases caused by adenoviruses are colds, pharyngitis or bronchiolitis, these in younger children. “Classically, adenovirus is associated with viral conjunctivitis and can give gastroenteritis with diarrhea”indicates Manuel Ferreira de Magalhães.

On the hypothesis put forward by British doctors, that we are facing a more violent strain of adenovirus and that affects more severely the gastrointestinal and hepatic part, the pediatrician admits that “it is one of the hypotheses on the table”, adding that the increase in cases of acute hepatitis now recorded can also be explained because, in the last two years, we have had a marked decrease, in general, in the number of infections, thanks to the restriction measures and confinements that the pandemic has forced.

Ferreira de Magalhães recalls what happened, for example, last year, with the respiratory syncytial virus, which is also a cause of bronchiolitis and emerged in force at an unusual time, being more common in the cold months: “Due to the confinements, we changed the dynamics and seasonality of the virus”, says the pediatrician.

The lower exposure of children to diseases in the last two years, which is also one of the hypotheses advanced by British specialists for the severity of diagnosed liver inflammation, is still a factor to be taken into account, says Manuel Ferreira de Magalhães, since the youngsters did not have the opportunity to get used to creating “defense mechanisms against small infections”.

Having read the technical reports on cases of acute hepatitis in the United Kingdom, where the majority of cases are recorded, the pediatrician nevertheless asks for some caution in blaming adenoviruses: “Until now, we are always in the realm of guesswork.”

How are adenoviruses caught (and prevented)

Regarding the usual ways of contagion of adenoviruses, Manuel Ferreira de Magalhães recalls that these, like covid-19, are transmitted through droplets and contact, so the measures to reduce contagions implemented during the pandemic can serve to keep the virus away. adenovirus, namely distancing and respiratory hygiene. “But unless it was suddenly realized that there was indeed a serious mutation of the adenovirus, I don’t see any reason to go back to masks”, says the specialist, noting that this type of virus is usually self-limiting and resolves spontaneously. .

“Adenovirus can be more serious in immunocompromised children, but this happens with any infection. It can cause cystitis, hepatitis, nephritis, it can present many forms and progress with severity. But this, I emphasize, is very rare. adenovirus presents as a fever associated with a runny nose and conjunctivitis. In babies, it can cause bronchiolitis”, says the pediatrician.

Good hygiene of hands, surfaces and food is a way to prevent the spread of the most common infections, also preventing the transmission of the adenovirus that may be the origin of this acute inflammation of the liver.

Cases of acute hepatitis in children have already been detected in 12 countries, with at least 169 cases reported by the World Health Organization – according to the most recent balance, which dates back to April 21. The United Kingdom registers the most cases, followed by Spain and Israel. Cases have also been reported in the United States, Denmark, Italy, France or Belgium. On Sunday, the WHO announced that a child had died of the disease, without revealing in which country the death occurred.

The European Center for Disease Prevention and Control has already announced that it is monitoring reported cases and plans to publish a rapid risk assessment tomorrow, Thursday.