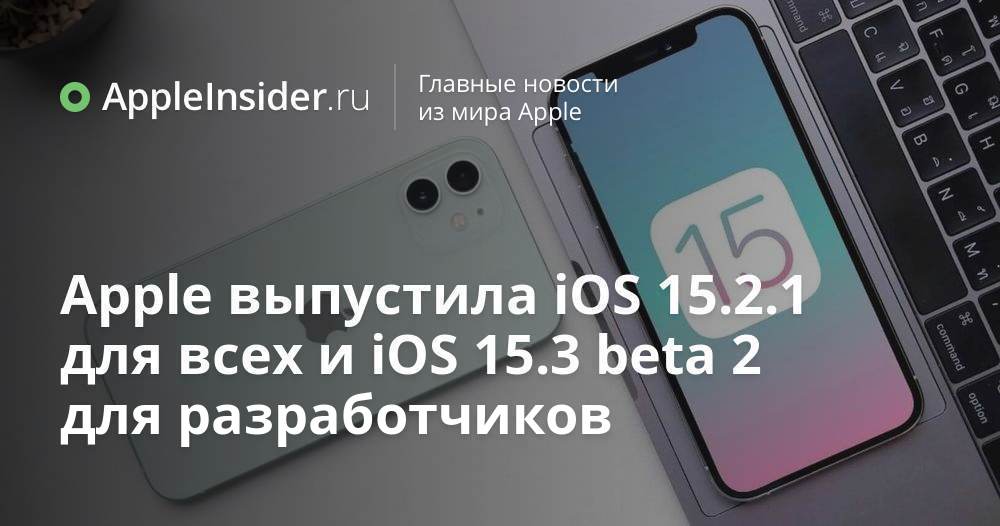 On Wednesday, January 12th, Apple released iOS 15.2.1 and iOS 2. iOS 15.3 beta for participants in the public testing program. More than three weeks since the previous version of beta 1, and a whole month since the release of iOS 15.2. We hope the developers took a breath and did a good job on the update. We remind you that you can always join the program, by installing a beta profile or enjoy the iOS update for everyone. We’ll tell you what’s new in iOS 15.2.1 and iOS 15.3 beta 2, as well as how to install them.

The company once again releases minor iOS updates for everyone, and in the update for developers it does not advertise innovations at all. IOS 15.2.1 tweaked a few things – that’s great.

You can install the update now

Apple again released an update, which does not contain any important innovations. But serious bugs were fixed that affected the operation of the iPhone. For example, these.

In addition, a serious bug related to HomeKit was fixed: the connected device had to contain 500,000 characters in the name, and when connected, the iOS device went into an endless reboot.

How to install the iOS 15 update

Update 15.2.1 is already available and weighs only 746 MB: it’s definitely worth installing, but following certain rules. For example, keep a backup so you don’t get trashed and lose data.

There is no information about the changes: most likely, existing errors were fixed, the speed of work on all devices was improved, algorithms were updated. Apparently, the beta versions are insignificant: the expected universal control feature has not yet been implemented. Let me remind you that it was announced back in June at WWDC, but its release was postponed from autumn to 2022. In addition, Apple also released new beta versions watchOS 8.4, tvOS 15.3 and iPadOS 15.3.

Also released iOS 15.3 beta 2. We tell you what has changed

If you want to try install iOS 15.3 beta 2, you can always do it. Do not forget that installing any update is fraught with risks – think carefully if you want to participate in this.

And here is the algorithm itself, which will allow you to install the new beta version of iOS.

Not sure where to get a beta profile to install a test version of iOS? Apple gives them away for free

We remind you that iOS beta 15.3 may not appear immediately – you may have to wait a bit. Keep checking until it appears in the list. Do not forget back up iPhoneto restore all data if something goes wrong. Do not be lazy create a backup before installing the update.