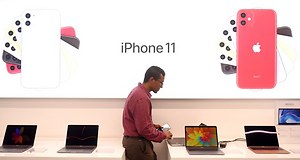 Since last weekend, it has been possible to find, in stores in New Delhi or Bombay, iPhone 11s, Apple’s latest high-end smartphone, “made in India”. Until some time ago, the information could have been anecdotal. This is not the case today, when China’s relations with the United States, but also India, are experiencing a significant increase in tensions.

For both Apple and New Delhi, the arrival on the Indian market of locally manufactured smartphones is an important step. From a commercial, political and diplomatic point of view.

For New Delhin, a new snub addressed to Beijing

For New Delhi, this rise of the apple firm is a new opportunity to thumb its nose at Beijing. And this, even though the border between the two countries, in the Himalayas, has been, in recent months, the theater of tensions which have gone beyond simple military confrontation. It is in this tense climate that New Dehli has banned some fifty Chinese applications for smartphones.

Another source of satisfaction for the Indian authorities, they can boast of having attracted the production of the latest high-end product from Apple. If the Cupertino company has already produced some of its smartphones in India in the past, they were entry-level devices. In fact, the iPhone 11 is now produced at the Foxconn factory in Chennai, where Apple produced its iPhone XR.

For Apple, this repatriation of production allows it to distance itself a little from Chinese manufacturers. Which is far from being negligible in the midst of Washington’s offensive against Beijing. Without forgetting that this relocation of production will also allow Apple to circumvent part of the American import taxes which now severely penalize products from China.

But for now, this remains very symbolic: in 2019, while Apple’s production in China weighed $ 220 billion, that in India was only 500 million. But the movement is underway and, according to the “Indian Economic Times”, within five years the American brand would like it to weigh for 40 billion.

To achieve this, other models could also be repatriated, and in particular the latest version of the iPhone SE which could in the future be manufactured in Bengaluru. While, to promote sales, Apple plans to soon launch an online store and open its first physical store in the course of next year.

A development strategy that is not limited to relations between the United States and China. Like all tech giants, Apple dreams of the Indian market and its 1.3 billion potential customers. Because manufacturing locally is also the best way, if not the only one, to penetrate the Indian market.

Because if the Chinese market has never been easy, that of India is not. Quite the contrary. Establishment and local production are often the only way to be competitive, while the Indian authorities, which launched the “Make in India” program in 2014, tax imported products at nearly 22%.

Significant boost to Make in India!

Apple has started manufacturing iPhone 11 in India, bringing a top-of-the-line model for the first time in the country.https://t.co/yjmKYeFCpL

Not to mention that even though New Delhi has just announced a $ 6.6 billion plan to attract major smartphone makers, the recent woes of Chinese applications, including TikTok, in the country serve as a reminder that India remains the one of the countries where the internet and new technologies are the most closely watched in the world.