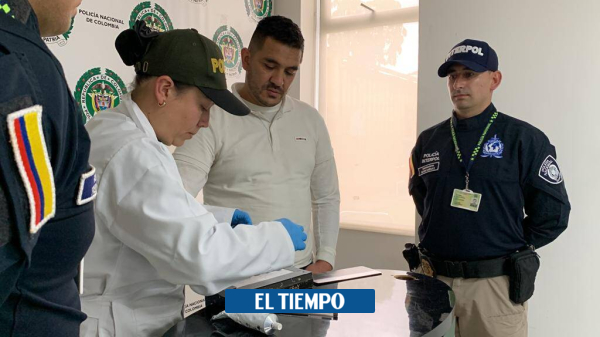 Apartment owner Henry Gavilán, captured in the US, was deported – Crimes – Justice

This Saturday afternoon, the director of the National Police, General Jorge Luis Vargas, confirmed that Henry Edilson Gavilán Tabares, members of a network that calls itself ‘Los Mayorca’, dedicated to the theft of residences in exclusive sectors of Bogotá, was captured in the United States.

According to General Vargas, thanks to the cooperation between the authorities of the two countries, Gavilán was deported, who is also accused of murdering a police officer.

(We suggest you read: This is how the drug flight in which ‘Matamba’ was going to flee this holiday weekend was planned)

“He is allegedly responsible for the murder (July 2019) of Mayor Erick Cruz, at a time when the CAI patrol in the La Arborizadora sector stopped a vehicle to verify the identity of its occupants,” said General Vargas.

(For context, we suggest you read: The policeman who was killed the day he returned from vacation)

The director of the National Police pointed out that the occupants of the vehicle attacked the uniformed men with firearms. “In the police reaction, two of the criminals were injured; but Sparrowhawk managed to flee“, he pointed out.

(It could be of interest to you: More than 13,000 police officers will monitor security in the elections in Bogotá)

In the United States, Henry Edilson Gavilán accused of the death (July 2019) of Mayor Érick Cruz was captured and deported. pic.twitter.com/V7XtAF9O1Q

Gavilán will answer for the crimes of aggravated homicide and trafficking, carrying or possession of firearmsfor the death of Mayor Cruz.

See also  The US imposes sanctions on the Mexican "Chuy González" for drug trafficking; FIU locks your accounts

Gavilán Tabares, after his escape, remained illegal in the US since August 2021.

On February 11, 2020, a blue circular was issued through Interpol against this person, whose deportation took place in the morning.

Cruz had been in the Police for 16 years and on the day of his death he had returned from his vacation period and had resumed his position as commander of the Arborizadora CAI.

(We suggest you read: What is known about the six men tortured and cremated in Bogotá)

At the time, Cruz and another colleague were transferred to the Police hospital, where the doctors could not do anything for the mayor, who arrived without vital signs.

Other news from the Justice section: