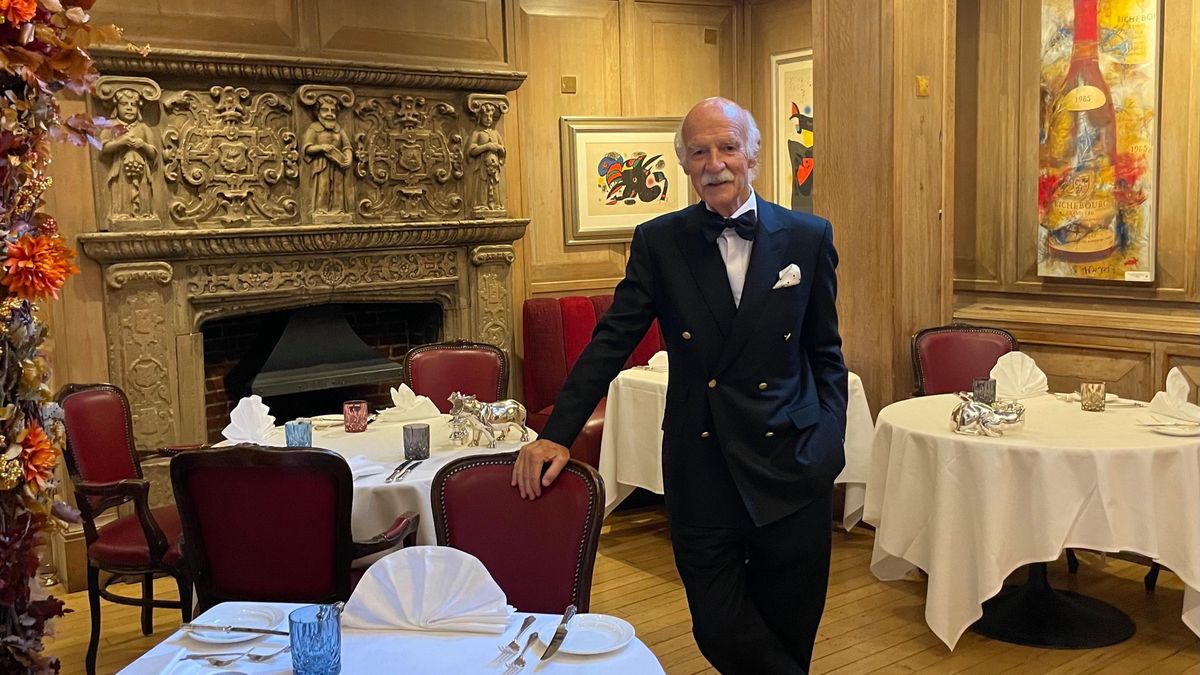 Maintenance: Anton Mosimann gave us a taste of one of King Charles III’s favorite dishes

The Swiss who cooked for Elizabeth II and her son has welcomed lematin.ch to its London establishment. The opportunity to come back to various anecdotes about the royal family.

It is in his restaurant in the heart of London that Anton Mosimann (75) gives us a date on Saturday 17 September. The four-story building looks like a chapel from the outside and a museum from the inside. On the walls there are many black and white photos of the chef in the company of celebrities: Pope Francis I, Naomi Campbell, Bill Clinton, Nicolas Sarkozy and Kofi Annan. The Swiss, who lives between the British capital and the canton of Vaud, also has a pair of Montreux Jazz Festival posters that perfectly match the chic atmosphere of the establishment.

He receives us at the bar, on the first floor. Black tie, immaculate suit and a small smile behind his white moustache, he begins the conversation by talking about his childhood, a glass of water in his hand. “I like to say that I was practically born on the kitchen floor.” As his parents were restaurateurs, Anton Mosimann always wanted to follow the same path. At 25, he is one of the youngest chefs to obtain the Chef de Cuisine diploma. Since then, prices and bookings have rained. When asked if there is an occasion he likes to cook for, he unsurprisingly replies, “There are so many, I can’t choose.” He particularly remembers the times he cooked for Margaret Thatcher and specifies that he made menus for seven different prime ministers in Great Britain.

But his greatest pride remains being able to work for the royal family. The interview, of course, continues about Queen Elizabeth II. Anton Mosimann entrusts his best memories to the Sovereign with a touch of sadness and a lot of nostalgia.

How are you feeling these days?

I am very sad and shocked by the news. She was an exceptional lady who did so much for Britain, but also for the whole world. He was an honorable person who everyone respected. I have known her for over forty years now and have cooked countless meals for her.

Do you remember the first meal?

It was in Montreal in 1967, she came by boat for the Universal Exposition. She was invited by then Prime Minister Pierre Elliott Trudeau…

And then she hired you directly?

Not. (Laugh.) The Queen Mother often came to lunch at the Dorchester, London (note: he was master chef there for 13 years). She loved my cooking because it was a mix between Japanese, Italian and it was always very simple, light and creative food. After every meal, when she got home, she asked her chef to contact me to give her the recipes. Queen Elizabeth II also decided to come, especially with heads of state. We talked more and more, little by little. I also cooked at home for a famous family for four years. The Sovereign came every October as a guest of honor with Prince Philip. I prepared menus for them at the weekend. This allowed us to get to know each other even better.

You who have rubbed shoulders with her several times, how would you describe her?

She was an incredible woman. She was very knowledgeable on all subjects and had no problem talking to anyone. She was also very understanding. I had the chance to be decorated as an Officer of the Order of the British Empire by the Queen in 2004. It was a unique moment. I was this little Swiss receiving this great distinction. I could not believe my eyes. Not to mention that she had a very good sense of humor… She rarely showed it in public, but always in private.

What moment did you especially appreciate in his company?

After a dinner hosted by the family, we all watched a movie with Jack Nicholson. There were only eight of us in the living room. I was in the back with my deputy. The Queen couldn’t stop laughing and commenting on the film, it was nice to see her like that.

Did the Queen have a favorite dish?

She liked lamb and salmon. She enjoyed eating, but always small portions. On the other hand, she refused to have garlic in her dishes during public events. In private there was no problem.

And Charles III, does he enjoy the same kind of cuisine?

He likes simple and organic things. You don’t need a lot of different tastes on the plate. For example, one of his favorite dishes is my mushroom risotto. It’s the best! (He bursts out laughing.) Lady Diana was also particularly fond of him. She had been here several times with William and Harry.

What do you think about the new king?

He is amazing. He works very hard. People don’t see how much he gives his all every day. He works with many charities. He also loves his farm where he spent a lot of time. Everything must be organic to him. I cook for him about four times a month and he is always very nice. He sends me a thank you letter after every reception.

Are you going to attend the funeral on Monday?

I don’t know yet. Everything is very strict and places are limited. There are many heads of state and kings and queens… If I have the opportunity to go, I will.