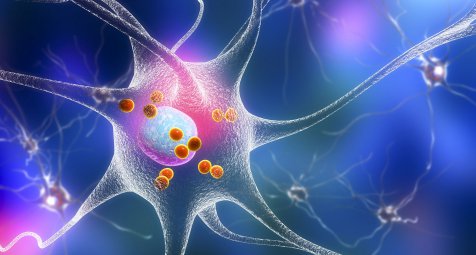 Antibodies against alpha-synuclein can prevent Parkinson’s disease in studies…

Cambridge/Massachusetts and Basel – The monoclonal antibodies prasinezumab and cinpanemab, which bind alpha-synuclein in the brain and are intended to prevent its further accumulation, have proved ineffective in phase 2 studies, such as those now in the New England Journal of Medicine (NEJM 2022; DOI: 10.1056/NEJMoa2202867 and DOI: 10.1056/NEJMoa2203395) show published results.

Parkinson’s disease is the second most common degenerative brain disease after Alzheimer’s disease (with a sharply increasing incidence in contrast to Alzheimer’s disease). Both diseases lead to deposits of proteins in the brain, which are said to play an active role in the pathogenesis.

In Alzheimer’s disease these are beta-amyloids and tau fibrils, in Parkinson’s disease there is an accumulation of alpha-synuclein in the so-called Lewy bodies. In both diseases, the deposits can be removed by antibodies. Significant successes were achieved in animal experiments with both diseases. However, the clinical studies that have been carried out in Alzheimer’s disease so far have been disappointing.

Although it was possible to significantly reduce the amyloid load, the progression of dementia could not be stopped. Most neurologists are also not convinced by the effectiveness of aducanumab, which was approved in the USA in June last year as Aduhelm for the treatment of Alzheimer’s disease.
For some time now, monoclonal antibodies have also been clinically tested for the treatment of Parkinson’s disease.

The studies on cinpanemab by Biogen from Cambridge/Massachusetts and prasinezumab by Roche in Basel are the most advanced. Both antibodies had reduced the concentration of alpha-synuclein or at least prevented further accumulation in the preclinical studies. Both antibodies had been shown to be safe in phase 1 studies.

However, the phase 2 studies SPARK on cinpanemab and PASADENA on prasinezumab found no evidence that the drugs can stop the progression of the disease. In both studies, patients in the early stages of the disease were randomized to different doses of antibodies or to placebo.

The number of participants, 316 in PASADENA and 357 in SPARK, was large enough to detect an effect on the MDS-UPDRS (Movement Disorder Society–Unified Parkinson’s Disease Rating Scale) over the course of the 52-week treatment, with which in disease Parkinson’s disease progression is assessed.

However, no significant difference to placebo was found for either of the two antibodies in the studies. In the secondary endpoints, too, there was mostly no evidence of a slowdown in the disease.

The conclusion of Tien Dam from Biogen and Gennaro Pagano from Roche Pharma is therefore sobering. Due to the disappointing results, Biogen stopped further clinical development of cinpanemab. Based on a favorable trend in the MDS-UPDRS Part III (clinically conducted motor examination), Roche believes that a benefit from prasinezumab is still possible.

AbbVie has BAN0805/ABBV-0805 tested in patients (NCT04127695) and UCB Pharma has also developed an immunotherapy drug, UCB7853 (NCT04651153). Other companies such as Affiris, AC Immune and Vaxxinity are currently investigating whether active immunization against alpha-synuclein can have a beneficial effect on the course of the disease. © rme/aerzteblatt.de

See also  Health: 51% of citizens are vaccinated with the two doses, and the fifth wave of Corona has broken