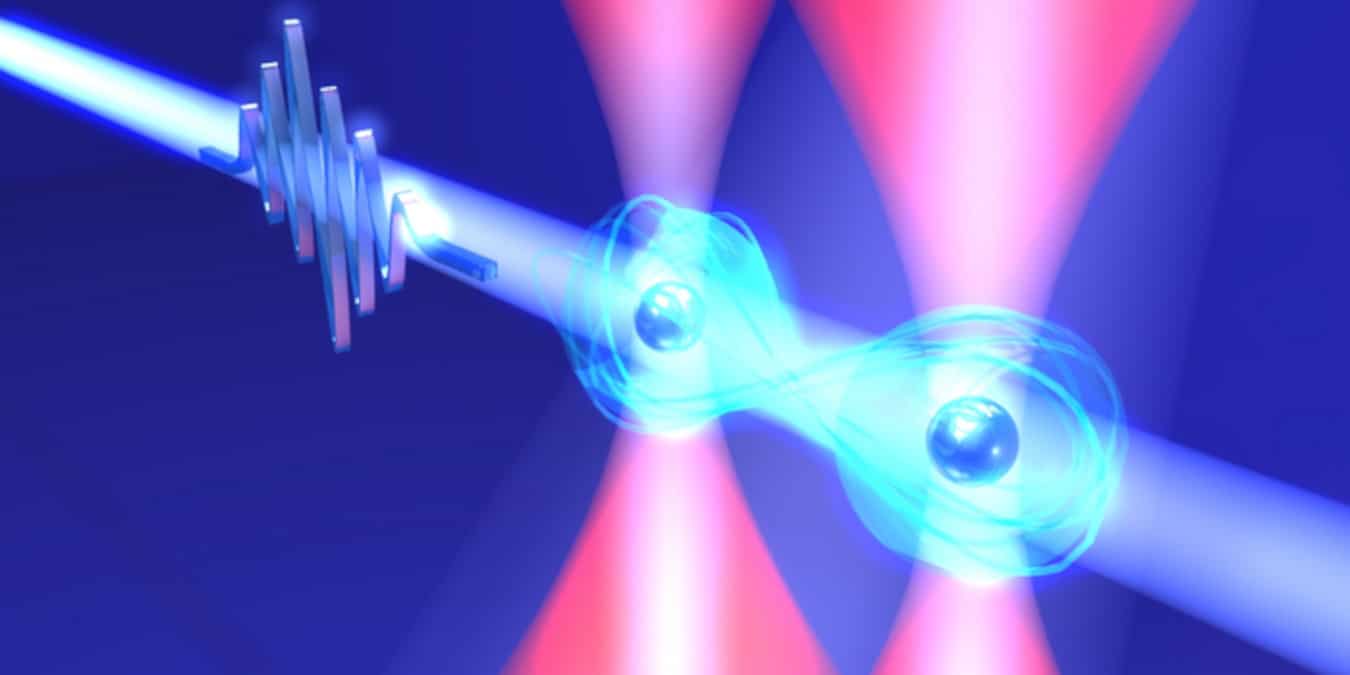 Another major breakthrough in the creation of ultrafast quantum computers

The two-qubit quantum gate is the simplest element of a quantum computer: it makes it possible to generate a quantum entanglement between two qubits. Superpositions of qubits are unfortunately very sensitive to external disturbances. To circumvent the problem, scientists are trying to create faster and faster quantum gates. A team from the Institute of Molecular Sciences in Okazaki, Japan, has just broken a new record in this field thanks to a new technique.

A quantum computer uses the quantum properties of matter to perform operations on data, including the concept of superposition of states: the basic units of information, qubits, can be in several states simultaneously, which the they are called quantum superposition — which distinguishes them from the traditional bits used in computing, which can carry the value 0 or 1 strictly. This layering is particularly sensitive to the environment; it degrades rapidly and the slightest interaction will cause a change of state and therefore, calculation errors.

To limit these effects, one solution would be to accelerate the quantum gate. The disturbances observed during the experiments are of the order of a microsecond; a quantum gate faster than this would therefore in theory be able to “override” the spurious noise to perform calculations. To do this, physicist Yeelai Chew and his collaborators constructed a quantum gate from large atoms, known as Rydberg atoms.

Rydberg atoms, with their huge electronic orbitals, exhibit dipole-dipole interactions reaching the gigahertz range at a distance of one micrometer, making them prime candidates for performing ultrafast quantum operations. ” Such strong interactions between two single atoms have never been exploited until now due to the strict requirements regarding the fluctuation of atom positions and the necessary excitation force. “, note the researchers.

The qubits used in this experiment are gaseous rubidium atoms. The researchers cooled them to a temperature close to absolute zero (to immobilize them), then positioned them at a very precise distance from each other (on the order of a micrometer) using holographic optical tweezers. They then applied ultrashort (10 picosecond) laser pulses to simultaneously excite a pair of these nearby atoms to a Rydberg-like state.

When the atoms were irradiated by the laser pulses, two electrons trapped respectively in the smallest orbitals (denoted 5p, closest to the atomic nucleus) of two adjacent atoms (denoted atom 1 and atom 2) were thrown into electron orbitals giants (Rydberg orbitals, denoted here 43D). The 5p electronic state constitutes the “0” state and the 43D electronic state is the “1” state; atoms 1 and 2 were prepared as qubits 1 and 2, respectively. The interaction between these giant atoms then led to a two-way exchange of orbital shape and electron energy, occurring with a period of 6.5 nanoseconds.

The researchers thus succeeded in creating a two-qubit gate called a “controlled Z gate” (or CZ gate), which is an operation that inverts the quantum superposition of a first qubit from 0 +1 to 0 -1 depending on the state (0 or 1) of a second qubit. This type of gate is usually easily degraded by external noise — especially that inherent to the laser in operation. But this time, the researchers broke speed records: their quantum gate operates in just 6.5 nanoseconds! That’s more than two orders of magnitude faster than ambient noise, so its effects can be ignored, the team points out.

The previous world record was 15 nanoseconds, achieved by Google AI in 2020 with superconducting circuits, the team said in a statement.

Atoms are natural quantum systems, so they can easily store qubits. In lattices of cold atoms, each one is well isolated from the surrounding environment and independent of the others, the coherence time of a qubit — i.e. the time during which the quantum superposition persists — can reach several seconds (which is much higher than quantum systems based on superconductors or trapped ions).

As a result, cold atom platforms are among the most promising candidates for quantum computing hardware and are attracting the attention of industry, academia and governments around the world today. Indeed, they exceed certain limits of superconducting and trapped ion quantum computers, which are currently the most advanced types of quantum computers. To further improve their quantum architecture, Chew and his colleagues now plan to replace the laser used with one that is even more precise.