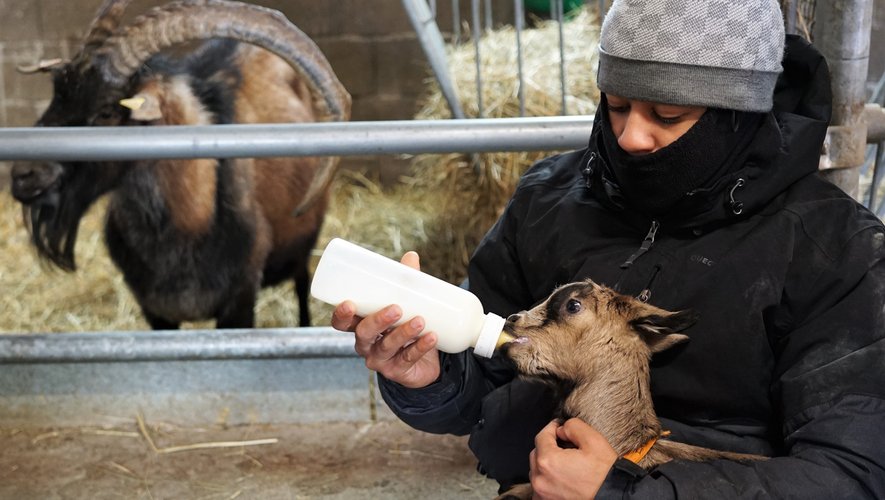 Animal mediation in the Hautes-Pyrénées: goats to appease teenagers with a delinquent course

the essential As part of an educational stay, six teenagers from the Don Bosco Reinforced Educational Center located in Gironde, placed by the courts after a criminal conviction, took part in a morning at the Gouaux goat farm near Saint-Lary. Farm where animal mediation is practiced with the help of a herd of beneficial goats.

Goats to soothe the ailments of the most fragile. This is the challenge that the owners of the Chèvrerie de Gouaux, Christian Barbouty and his partner Stéphanie, successfully launched more than two years ago. “Basically, I came near Saint-Lary to give another meaning to my life,” says Christian Barbouty. “Stéphanie and I took over a sheepfold in the small village of Gouaux, without intending to do animal mediation. It is the sum of meetings with several people in pain, and who showed an improvement in their condition in the contact with the goats, which convinced me to embark on this adventure.”

Already sensitized to the subject, the couple who produces cheese, and lives from direct sales, then decides to open the doors of their sheepfold to people with disabilities or in great moral distress. Not for profit, but simply with the aim of bringing well-being to others. “We are not therapists. We only put a herd of goats carefully prepared to receive the public at the disposal of the specialized educators, and psychologists, who accompany the children or their patients”, specifies Christian. “VIP” goats, who listen to sacred music and benefit from daily massages during milking. “Once we have issued the safety and respect instructions for the animals to the groups we receive, we step aside.”

A concept that has proven itself according to the educators of the Don Bosco Reinforced Educational Center (Gironde), which welcomes adolescents aged 14 to 17 placed by the courts following a criminal conviction. For more than a year, the centre’s educational team has been working hand in hand with Christian and Stéphanie, and has observed beneficial effects on the behavior of their residents after a visit to the goat farm.

See also  Rocks break off the mountain and fall into a tourist hotel in Crete: a woman loses her life - 7of7

Although the trip by minibus to Christian and Stéphanie’s farm was more than hectic, Sacha, one of the centre’s specialized educators, noted a radical change in behavior among the six teenagers she accompanied on a visit this Wednesday January 25. “When they got on the bus, they didn’t want to take part in the activity. But once they got into the goat shed, they didn’t want to leave. The most recalcitrant are ultimately those who show the most tenderness with the goats.”

A successful bet for the educator, as with each stay she has organized in the Hautes-Pyrénées. “These are children mostly from housing estates or difficult neighborhoods, with a delinquent background. Animal mediation allows us to confront them with situations they do not know, but also to break the codes they have learned We watch their reactions and talk about it with them.” A moment outside the walls of the closed center, which allowed adolescents and educators to discover themselves differently and to weave a different relationship. “If the goat is the catalyst, it is up to the educator or the therapist to seize this moment to close the virtuous triangle with the person(s) he is following”, adds Christian Barbouty.

Instinctively, the goats focused on children in great emotional difficulty. Thus, Gwénaël, 16, remained for long minutes surrounded by goats and assailed with hugs. A flood of tenderness by which he let himself be carried away, and to which he responded with a long session of caresses. “I love them, so they love me too…” he deduced. An implacable logic that left his companions speechless.

For Christian Barbouty, nothing surprising in all this. “It’s the goats that come to you if they feel you need them. These children are often in great emotional deprivation and lack of bearings. And then the animals don’t judge, they simply love you.” And to remember the day when an autistic child in a wheelchair, accompanied by her parents and her psychologist, kissed a goat. “It was the first time she gave a kiss, everyone was in tears in the sheepfold.”