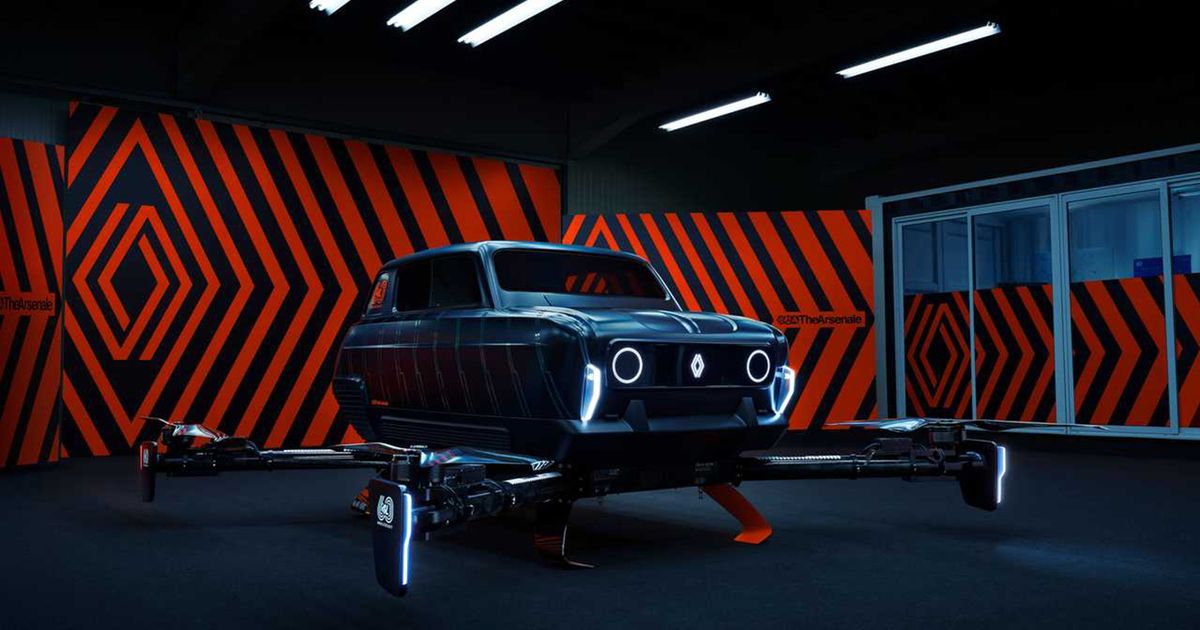 And the Renault 4L flew away …

Indeed, the Renault Air4 Concept is ultimately a drone. The idea behind the Air4 concept is to show how a brand icon could be reimagined 50 to 60 years from now, and while this is unconfirmed, it could provide stylistic clues on the upcoming Renault 4 road, which is expected to be relaunched as a small, inexpensive electric model within a few years. “Air4 is a symbol of independence and freedom, born from the realization that traffic escalates, that lives stop, and that the world above us is unhindered “, says Renault. “Air4 claims air as the new road of the future“.

Two-bladed propellers at every corner of the car

The body, which features similar lines to the original 1961 car, is made entirely of carbon fiber. According to Renault, “hours of calculations and tests“were needed to ensure that the rigidity of the body was sufficient to withstand the thrust and lift generated by the drone. Two-bladed propellers are placed at each corner of the car, like a conventional drone, and there is no There are no wheels. The drone is powered by 22,000 Ah lithium polymer batteries, with a total capacity of 90,000 mAh, but no voltage is indicated. Total thrust is 95 kg per propeller .

The car frame sits in the middle of the drone propeller frames. The driver can access the car by lifting the car shell, which is hinged at the front. The interior is described as “utility” but has yet to be revealed. Renault claims that the Air4 concept has a horizontal top speed of 93 km / h, is capable of flying at an altitude of 700 m and that it can bank up to 70 degrees in flight. It can take off at a speed of 50 km / h, but is currently limited to 15 km / h for safety reasons. It can land at a speed of slightly less than 11 km / h.

Designed, developed and built in France, the Air4 will be on display until the end of the year at the Atelier Renault museum in Paris. In 2022, it will be presented in Miami, New York and Macau.

Engineers delirium? Serious proposition of what could be the car of tomorrow? Answer to the kilometers of traffic jams that invade the roads every day? Finally, the Renault Air4 may not be that ridiculous …