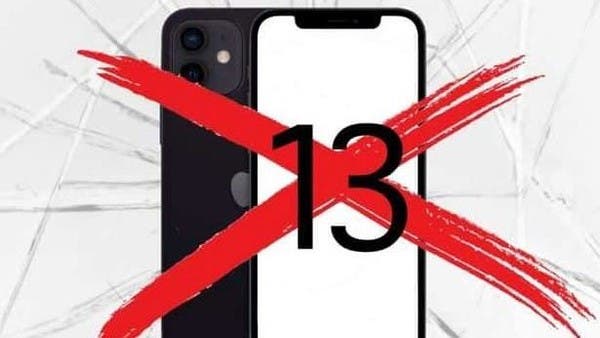 At a time when Apple is currently preparing to unveil the new generation of iPhone phones, which will take place next September as usual, which broke the previous year, as it revealed the iPhone 12 in October, due to the circumstances of the Covid-19 pandemic, but for this year Another situation.

While Apple has adopted a numerical sequence of iPhone phones since the first iPhone, as the new generation is supposed to bear the name “iPhone 13”, rumors have emerged that the Cupertino giant may avoid calling it that name, because the number 13 is an “ominous omen.”

According to the rumors circulating, there are now internal talks at Apple to discuss this matter.

Although the idea may be strange and ironic, there is a strong belief about the number 13 in some cultures, and this myth has a really long life.

On the other hand, the company did not confirm or deny the matter, but the importance surrounding the matter increased after it was taken up by a number of sources, and in his Front Page program, the famous leaker Jon Prosser predicted that Apple may actually exceed the number 13.

This condition is known as Triskaidekaphobia, which is a phobia of this number and anything related to it, and this shows us that the reason may not be Apple itself fear of device failure or something.

Apple may also give up this numbering in the next generation of its phone in order to avoid the users themselves fearing this number, whatever the stage of this fear, whether real morbid fear, mere pessimism, hatred or whatever, these reasons may prompt users not to buy the phone.

Apple returns to the old name with iPhone 12

Previously, Apple was releasing versions with the same number in two consecutive years, which is what happened with phones such as the iPhone 6 and iPhone 6s, and even the latest iPhone X version, which was followed by the release of the iPhone Xs next year for its launch.

Apple may resort to this label, especially since sources close to the company have stated that – and as usual – the new iPhone will come with minor changes compared to the current generation, which is a claim that may make Apple stick to the old name on the one hand. The number 13 avoids the abomination, on the other hand.

And what proved that many cultures really hate the number 13 is a poll conducted by one of the sites, which ended with a vote of about 75% of users that they want the next iPhone to come with any name other than the name “iPhone 13”!

It is worth noting that Apple used the number 13 naturally in more than one product or service, for example, the iOS system was released naturally with the number 13 two years ago, as well as the A13 Bionic chips used in the company’s latest phones!

So Apple probably doesn’t need to avoid number 13 on simple products like this.