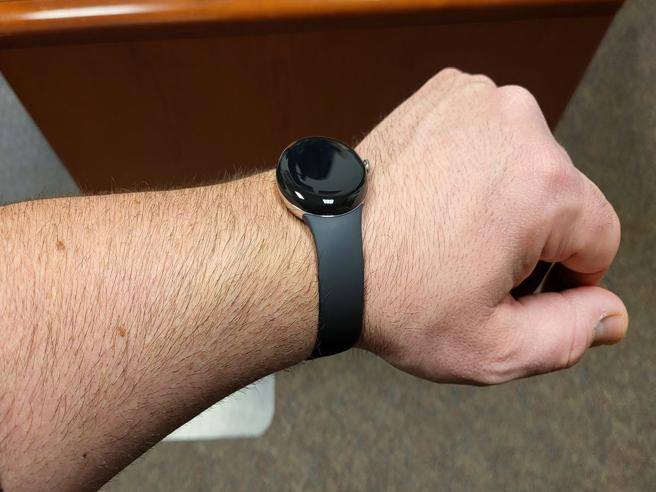 Confirmed the rumors on the first Google smartwatch: circular shape and no edges. In 2010 the famous precedent of the iPhone 4 found in a bar

A person forgets a device that has not yet been launched on the market in a club and the media spread photos of it. The script of when it happened in 2010 when Gizmodo revealed the features of the iPhone 4 in advance, seems to repeat itself 12 years later. Only in this case the involuntary protagonist of the whole affair is the Pixel Watch, the expected smartwatch that Google should launch during the next developer conference in May.
The first to spread the images was the specialized site Android Central after a person, who remained anonymous by his request, came into possession of the device left in a restaurant where a friend works, also not voluntarily identified. It seems that the prototype, not working and delivered without the strap due to the forgetfulness of the friend himself, was lost weeks before the photos were released.

But the find still allowed to confirm several details of the design that had been circulating for months now. First of all the circular shape with the almost total absence of display edges. On the external crown there is also a wheel that protrudes, while two buttons are set in the side surface. On the back there are several sensors that should be used to monitor the heartbeat and to make an Ecg. However, it is not clear how the wearable can be charged.
The aspects related to the Pixel Watch strap are much more difficult to define through these photos. On the external circumference there are two spaces to insert the two bands of the strap, but only one of the two openings shows the so-called pogo pins, which should represent the possibility of connecting the smartwatch to other electronic devices not well specified.

But the Reddit user thought about giving more information on these aspects tagtech414, the same one who passed the Pixel Watch photos to Android Central. After finding the two parts of the strap from her restaurateur friend, she posted new images with the smartwatch worn on her wrist.
The strap is 20 millimeters wide, two less than that of the Apple Watch, and looks very similar to those also used for the Fitbit Charge 5. Not a coincidence given that the line of wearable devices has been acquired by Google. Tagtech notes how at first he struggled to close the two ends on the wrist, only to say that he did not perceive any sensation of discomfort even after hours in which he was wearing the smartwatch.