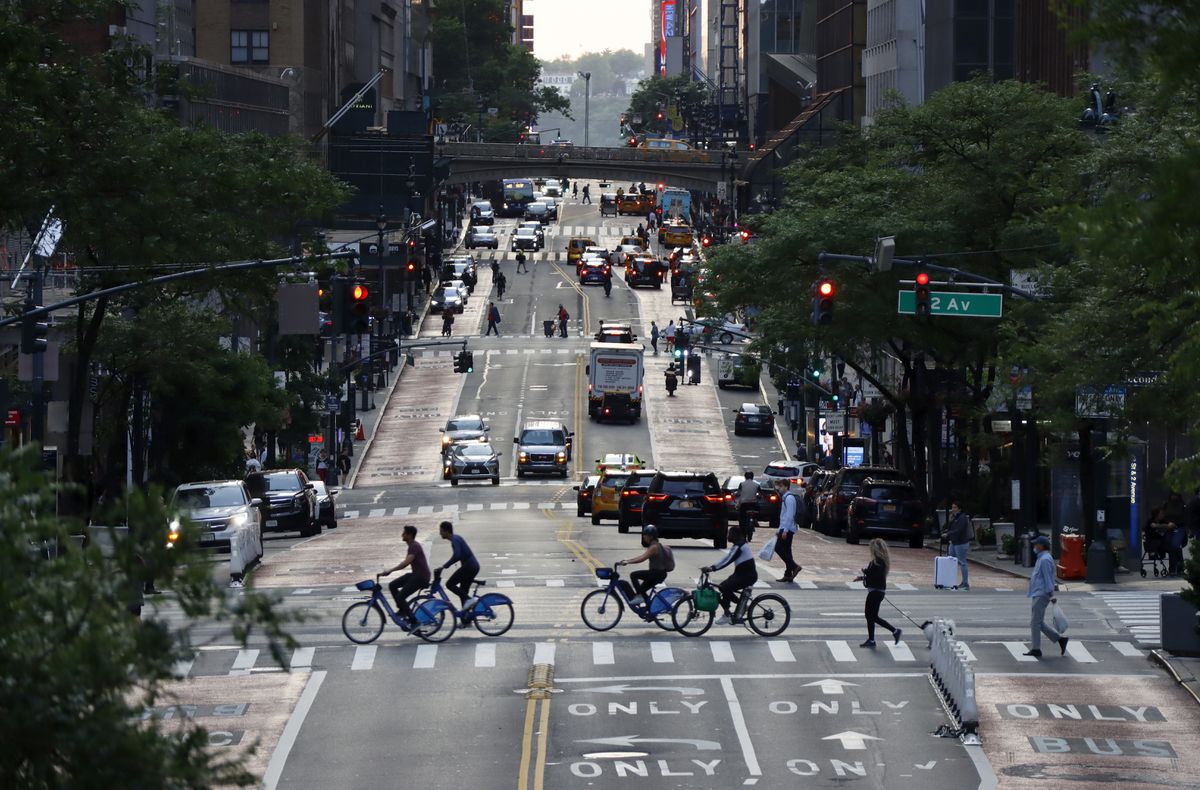 The promises of regeneration of so many urban ills that the pandemic encouraged in its day have not taken long to deflate in New York in terms of traffic. The new normality has not only not meant a greater use of public transport, a dysfunctional and deficit system, but also an increase in the use of the car that since 2021 is causing unparalleled accident figures. The increase in traffic accidents is not unrelated to the disconnection of the city’s speed camera system, which by state law turns off its cameras from 10 p.m. to 6 a.m. and on weekends. Fatal crashes as a result of speeding, with pedestrians and cyclists as the scapegoats, have become a daily occurrence, to the point of being defined by social agents as an “epidemic of road violence”.

Road traffic says a lot about a city, and in the case of the Big Apple, also about the inequality of urban design. Deaths have increased 29% compared to 2018, the safest year of Vision Zero, a municipal plan to prevent accidents launched in 2014 by then-Mayor Bill de Blasio. Several factors define the phenomenon among the avalanche of statistics: increasingly younger fatalities (11% under 18 years of age), an increase in drivers who flee after a crash or run over (129% more in the second quarter, compared to that period in 2019), and a three times higher number of victims among users of bikes, scooters and motorcycles in Brooklyn. But the worst-performing district is the Bronx: with the same potential population of cyclists as the other four, it registered more deaths this semester than before the implementation of Vision Zero.

See also  Prophet: which cupcakes will you withdraw from the market; this found marks

These are data from Transportation Alternatives (TA), the main organization in the field of mobility, in a city where, with the exception of well-connected Manhattan, the rest of the districts are at the mercy of a network of extremely slow public buses (the slowest in the country, 8 miles per hour, 12km/h) or, if you are lucky, from a subway entrance that is surely inaccessible to people with reduced mobility. Only about 25% of the 472 metro stations, which have not yet recovered economically from the pandemic, have ramps or elevators, a resounding deficit that the transport authority plans to alleviate by 2055, making 95% of the mouths accessible . Move who can, and as you can, seems to be the motto of a demanding city also in transport.

A little over a month ago, on a semi-pedestrian section next to the emblematic Flatiron building, a taxi drove away a group of Latino tourists, with several seriously injured. Three teenagers were recently killed in a head-on crash on Staten Island over the weekend. A woman has lost her life after being hit by a car while she was pushing her baby’s stroller, while the driver was on the run, in the Bronx. Karina Larino, 38, died in April in Astoria, struck at an intersection with poor visibility by a driver who was too fast. “She did not run away, but she called her children first instead of notifying the police, with my daughter’s body under the wheels,” Carmen Larino recalls between sobs. “My daughter was coming home from work, it was dark and it was raining, the car went at high speed under a bridge through the pass where my daughter was crossing. Half of her body was under the car, with sunken ribs and one of them penetrated her heart. Two policemen who were nearby heard the knock and came,” continues Carmen Larino, a retired nurse. “What makes me most angry, besides the pain, is that they haven’t taken away her license, that woman lives in this area and she still drives…”.

The driver has been read the charges and the trial is scheduled for September. “The speed cameras recorded everything,” adds the woman, who last month began collaborating with the association Families for Safe Streets (Families for Safe Streets), “to help ensure that no one goes through what we are going through.” In his opinion, the recipe for avoiding accidents is speed control, better street lighting and more traffic police, “because there aren’t any at night.”

The striking shutdown of speed cameras – the Vision Zero program limited it to 25 miles per hour, 40 km / h – will be remedied as of August 1, recalls Cory Epstein, spokesman for TA, after intense pressure on the authorities of hundreds of groups, because, remember, “the vast majority of claims happen at night and on weekends.” Anna Melendez, organization coordinator of the NGO, considers that the crux lies in urban design, and specifically in the fact that the streets are not designed for shared use. “They are designed for cars, and fast cars,” she stresses.

The pandemic, far from constituting a haven of time and space to rethink road coexistence, emptied the streets “and cars were able to use them at will, with fewer controls, less surveillance and at a higher speed,” adds Melendez. Everything, however, comes down to “bad infrastructure, bad design”. And to an unequal distribution of interests: “Of the public space, 51.4% is occupied by moving cars [calzadas]; 24.8%, for car parking spaces, 22.7% are sidewalks and the rest, 0.96%, bike lanes and Open Streets”, streets closed to traffic as a result of the pandemic to encourage consumption on terraces, in a program that has become permanent.

In the New York metropolitan area there are, according to the Department of Transportation, a thousand dangerous intersections, or black spots, such as the scene of Karina Larino’s fatal run over. Add to this the existence of expressways with several lanes that often divide a neighborhood like a stab – a noticeable urban scar in the more disadvantaged outlying districts – and the circulation of heavy trucks along any street – in the US the size is everything-, to understand the failure of an initiative like Vision Zero, “which has gotten worse,” Melendez recalls.

Three deaths a day in the city

According to this NGO, traffic accidents kill an average of three New Yorkers daily and seriously injure hundreds more, often with lifelong consequences and the corresponding health costs. Statewide, traffic deaths have increased 20% since the pandemic, and that drain costs about $15 billion a year.

Ghost Bikes (ghost bikes) is an initiative that started in Missouri in 2003 and that with bikes painted white, tied to a lamppost or a sign near the scene of the accident, remember the hit cyclists throughout the city. There are hundreds, with a plate that identifies the victim so that the accident rate leaves the anonymity of statistics. They are also a silent statement in defense of the safety of cyclists. The risks of moving on two wheels are notorious in New York, Gustavo Ajche, founder of the union Los Deliveristas Unidos, knows well, home delivery people who use the bike as a work tool.

“The bike, especially the electric models, is fast and allows you to move more easily, but the cars continue to feel like the owners of the road. We have invested in road education campaigns for our colleagues, about, for example, the use of a helmet and reasonable driving. But on weekends, when it’s busier [de repartos]also coincides with an increase in speed [de los coches]. Two colleagues have recently had accidents, one on the way home and the other, who recovers, at eight in the morning on a holiday due to a driver who is too fast. The incident occurred at the gate of a school, imagine what that would have meant on a business day… probably more victims”.