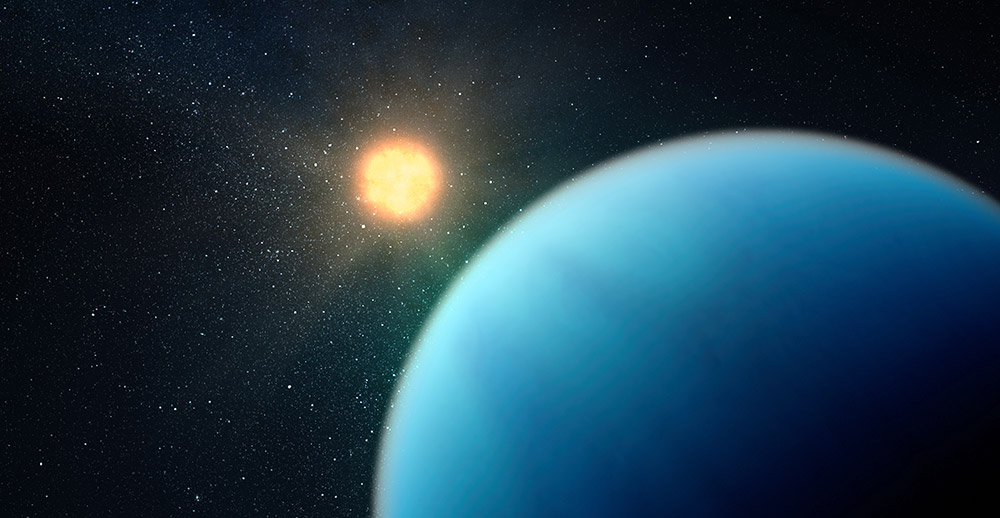 Planetary exotic: Astronomers have discovered an eccentric exoplanet around a nearby red dwarf. The Sub-Neptune TOI-2257b has an unusually wide orbit, but orbits in the habitable zone. In addition, its orbit is the most eccentric that has ever been observed around a red dwarf. The researchers suspect that an as yet undiscovered gas giant further out brought the exoplanet out of orbit.

Planets typically orbit their stars on a circular or at best slightly elliptical orbit – this is also the case in the solar system. This is because the material and orbit of the planets go back to the rotating protoplanetary disk of their parent star. For this reason, among other things, strongly eccentric and elliptical orbits are the great exception in exoplanets. Astronomers suspect that such planets were subsequently deflected from their original orbit by interference or collisions.

Astronomers working with Nicole Schanche from the University of Bern have now discovered one of these eccentric exotic species. It is an exoplanet orbiting the red dwarf TOI-2257, which is around 188 light-years away from us. The TESS space telescope had already observed suspicious darkening of its light from this star. Such shadows are considered to be a possible indication of a transit – the passage of a planet in front of its star.

However, because there were gaps between the observation times of the TESS telescope, astronomers could not more precisely determine the time interval at which the red dwarf was darkened. It therefore remained unclear whether it was really the transit signal of an exoplanet. Schanche and her team have therefore now taken a closer look at the star with several earth-based telescopes.

A sub-Neptune on a wide path

Thanks to these observations, the team was able to limit the distance between the shadows to 35 days. The regularity of these events also indicated that they really had to be the transits of an exoplanet. This planet, named TOI-2257b, orbits the red dwarf in an orbit that is unusually wide for such dwarf stars. “So far, only two other red dwarf exoplanets with transit periods greater than TOI-2257b are known,” the astronomers say.

From their data, the researchers conclude that the planet is around 2.2 Earth radii and has an estimated mass of 5.7 Earth masses. So the planet could be a mini-Neptune – a small ice or gas planet. The distance to the star also suggests that the exoplanet is moving in the habitable zone. “This means that TOI-2257b is one of only around 20 previously known sub-Neptunes whose equilibrium temperature falls into the zone of potentially liquid water,” explain Schanche and her team.

But this friendliness to life is only theoretical, because gas planets like TOI-2257b have such a high atmospheric pressure that life on their solid surface is impossible. “However, life in the clouds on the planet is definitely a possibility,” say the researchers. An exomoon on this planet could also be habitable. The probability for such a satellite is rather low with TOI-2257b, as calculations have shown.

In addition, the Mini-Neptune does not remain permanently in the habitable zone. “We found that TOI-2257 b does not have a circular, concentric orbit,” reports Schanche. Instead, the planet’s orbit is highly eccentric. While the eccentricity of the Earth’s orbit is only 0.017, the orbit of Sub-Neptune has an eccentricity of just under 0.5. According to the researchers, this planet has the most eccentric orbit of all known exoplanets around a red dwarf.

Oscillating between the extremes

“In terms of possible habitability, this is unfortunately bad news,” explains Schanche. “While the average temperature of the planet is pleasant, it fluctuates between minus 80 and about 100 degrees, depending on where the planet is in its orbit, whether it is near or far from the star.”

Why the sub-Neptune has such a “crazy” orbit is still unclear. The astronomers suspect, however, that the interference from a second, even further outward orbiting planet around TOI-2257 could be the cause. Future measurements of the radial velocity could clarify whether there is such a planet. In this case, subtle shifts in the star’s light spectrum reveal the effects of gravity from orbiting planets.

The nearby Mini-Neptun TOI-2257b is therefore exotic in several ways. However, it is precisely this that makes it a particularly exciting object to observe. Because so far astronomers have only known a few exoplanets with this combination of a wide, eccentric orbit and a thick gas envelope. It therefore offers the chance to reveal more about the characteristics and development of such planetary exotics.

Its position and the relatively large distance between the star and the planet also make the TOI-2257b a suitable target for observations with the new James Webb space telescope. Its infrared optics and spectroscopes are specially designed to analyze not only distant stars and galaxies but also the atmospheres of exoplanets. “In particular, the planet could be examined for signs of features such as water vapor in the atmosphere,” says Schanche. (Astronomy & Astrophysics, 2022; doi: 10.1051 / 0004-6361 / 202142280)