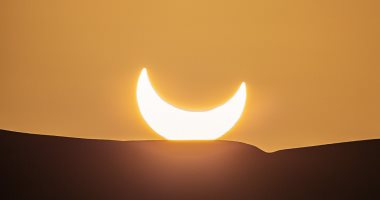 The globe will witness, tomorrow, Thursday, Shawwal 29, 1442 corresponding to June 10, 2021, an annular eclipse of the sun, the first of two polar eclipses that will occur this year, and it is (not seen) in the sky of Egypt or the Arab world.

And a report by the Astronomical Society in Jeddah revealed in a report that the eclipse in all its stages will last about 5 hours from start to finish between (08:12 am and 01:11 pm GMT).

The report indicated that an annular eclipse is one of the types of solar eclipse that occurs at the beginning of the lunar month when the moon blocks most of the sun’s disk, but an outer part of the sun remains as a ring surrounding the moon.

The report continued: Therefore, observers in the areas located in the narrow annular eclipse path in the far east of Russia, the Arctic Ocean, western Greenland, Canada and Russia will be able to see that the moon falls directly in front of the sun, but it will not cover it completely because the moon will be far from the Earth and its apparent size will not be large enough for that There will remain a bright ring around the moon called the “ring of light”, which means that the sun’s corona will not be visible.

The report explained, that the reason for this is that the moon moves in an elliptical orbit, not completely circular, so it sometimes moves away from the Earth and close at other times, and on the day of the eclipse, the diameter of the apparent moon will be 1.5% smaller than the average, as it will be two days after exceeding it. The apogee (the farthest point in its orbit from the Earth) so at the height of the eclipse its apparent diameter will be 6.7% less than the average and it is not large enough to cover the entire sun and for this reason this eclipse is annular.

See also  Missed the eclipse? Here you can see the spectacle in the video!

The path of the annular eclipse will travel from the North Pole to end at sunset over northeastern Siberia.

In general, seeing the annular eclipse at sunrise or sunset can be very important due to weather influences, however, due to the terrain, forests and weather conditions, Canada or Russia may not be suitable enough so northern Greenland may be a suitable option for observing this annular eclipse.

Some areas will have an exceptional view of the partial eclipse at sunrise, as the “horns of the sun” will be observed shining over the water in Thunder Bay, Canada, the Canadian city of Sault Ste. Marie, Toronto, Philadelphia, New York City, Atlantic City, and other places will witness a sunrise. Eclipsed sun in the shape of a shark’s fin, such as the cities: Ottawa, Montreal and Boston.