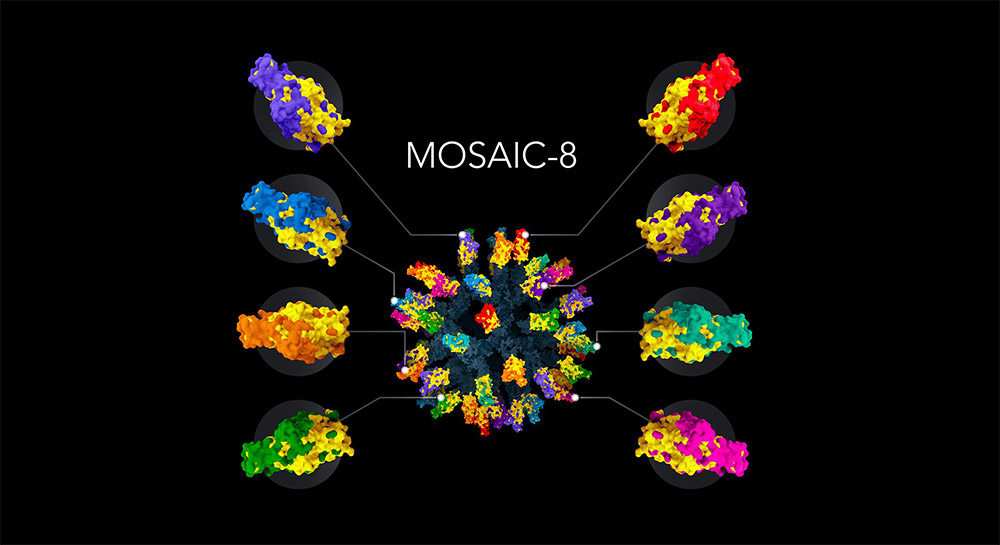 Comprehensive protection: Researchers have developed a novel broad-spectrum vaccine against coronaviruses that could even protect against future types of viruses. It contains pieces of protein from eight different beta corona viruses and proved to be very effective in tests with mice and monkeys – even against corona viruses whose proteins are not contained in the vaccine. The reason: the combination vaccine promotes the formation of antibodies that primarily target parts of the viral protein that do not change across species.

Corona viruses are very changeable and quickly adapt to new hosts and circumstances through mutations – this is demonstrated by the current corona pandemic: Over time, the SARS-CoV-2 coronavirus has formed numerous variants that are easier to transmit and affect our immune response in parts can undermine. A look at the animal kingdom also shows that there are countless other corona viruses that could make the leap to humans in the future – with the risk of a new pandemic.

However, this also means that classic vaccine development will always lag behind such viruses. No sooner has a vaccine been found against one variant than the next appears.

This is exactly where a new type of vaccine comes in: “We want to develop an all-round vaccine that protects against all SARS-like betacoronaviruses – no matter which animal coronavirus next spreads to humans,” explains Pamela Bjorkman from California Institute of Technology. “At the same time, this type of vaccine could also protect against current and future variants of SARS-CoV-2 without us having to constantly adapt it.”

In order to achieve such broad-spectrum protection, Bjorkman’s team has developed a vaccine whose central component – a nanoparticle – consists of a “sticky” carrier protein. Pieces of the viral spike protein are then mounted on its surface. In the current test vaccine “Mosaic-8”, these are the binding sites of eight different betacoronaviruses, including SARS-CoV2, the bat virus RaTG13, a form of coronavirus that has been detected in pangolins, and five other bat viruses similar to the pandemic pathogen.

The idea behind it: When our immune system comes into contact with so many different viral proteins, it looks for recognition markers and points of attack that are the same for everyone. The defense would therefore have to form antibodies primarily against the parts of the viral protein that differ little or not at all from the various corona viruses – and which will therefore probably be hardly changed in future variants.

In fact, preliminary studies on the Mosaic-8 vaccine showed that the immune system of mice produced more broadly effective antibodies after vaccination. “These bind preferentially to conserved epitopes of the binding site,” the researchers report.

Tests with mice and macaques successful

For their current study, Bjorkman and her team vaccinated mice and macaques with either the Mosaic 8 vaccine, an “empty” nanoparticle, or a nanoparticle containing just the SARS-CoV-2 spike protein. The animals were then infected with SARS-CoV-2 or its predecessor SARS. The exciting thing about it: The vaccine did not contain a protein fragment from SARS. The team wanted to find out whether the protection is broad enough to neutralize even the coronaviruses that are not included.

The result: “The animals vaccinated with Mosaic-8 produced antibodies that recognized literally every SARS-like betacoronavirus that we tested,” reports first author Alexander Cohen from Caltech. None of the animals infected with SARS-CoV-2 fell ill. More importantly, the test animals that received only the narrow-spectrum vaccine variant against SARS-CoV-2 were not protected against SARS and died.

The animals vaccinated with Mosaic-8, on the other hand, remained symptom-free even with SARS, as the researchers report. As hoped, the broad-spectrum vaccine was even effective against a coronavirus that was not contained in the vaccine.

According to the scientists, this proves that a combination vaccine against corona viruses can work. A vaccine based on the Mosaic-8 model could not only protect against new variants of known pathogens such as SARS-CoV-2, but also against new corona viruses that spread to humans. “Some of these betacoronaviruses used for the vaccine could be closely related to the strain that is causing a new disease outbreak,” says Bjorkman.

“We therefore need something that protects against this entire group of viruses – and we believe that we have now found it,” states the researcher. In the next step, Bjorkman and her team want to test their Mosaic-8 vaccine in a phase 1 clinical trial in humans. The first focus will be on the safety and tolerability of the vaccine. “The tests in monkeys have been extremely promising, so we’re excited to support this next phase of clinical trials,” said Richard Hatchett, leader of the Coalition for Epidemic Preparedness Innovations (CEPI).

At the same time, the scientists are planning further animal experiments. Among other things, the protective effect of the Mosaic 8 vaccine is to be examined in animals that have already been vaccinated with common Covid 19 vaccines. The main question here is whether the immune system can relearn: Can it then produce antibodies that have a broader effect instead of the relatively specialized antibodies? (Science, 2022; doi:10.1126/science.abq0839)

See also  Tick ​​vaccine, how it works and why it matters