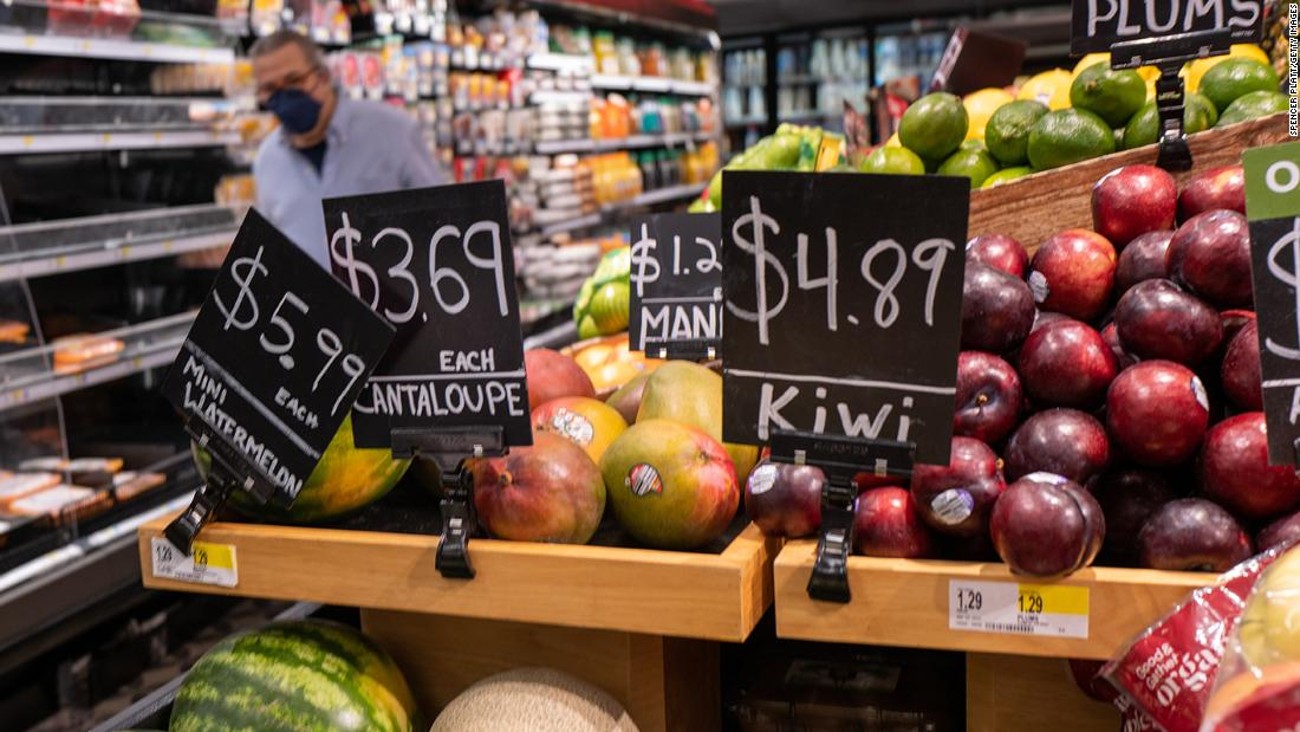 America is on the edge, and that’s bad news for the White House

Biden: My priority is to fight inflation 1:18

(CNN) — If Americans are “very, very depressed,” as President Joe Biden suggests, no wonder. Many key aspects of America’s economic, social, and national life, once considered smoothly functioning certainties, are out of whack.

The covid-19 pandemic, while its deadly grip has lessened, has left behind a complicated legacy of challenges that continue to disrupt everyday life. Some are aggravating, like the more than 800 air flights canceled this Sunday. Others threaten Americans’ economic prospects and their sense of security and well-being, such as growing fears of a recession.

This atmosphere is sure to spark further unrest in a nation that is seeing ideological divisions widen ahead of the midterm elections, likely to cause further dysfunction if power is divided in Washington between Republicans and Democrats. And it all but guarantees years of political bickering heading into the 2024 presidential race, potentially hampering the nation’s ability to resolve any crisis.

Acute problems include record gasoline prices. Families are struggling to cope with the rising costs of food and vital goods. Some big cities are failing to manage the homeless crisis. Baby formula shelves are still often empty. And summer getaways are hampered by an airline industry thrown out of whack by Covid-19. Although vaccines and less deadly variants have reduced the threat of the virus, it continues to disrupt businesses, schools and summer camps.

The country’s political division, meanwhile, is exemplified in the tortuous effort to pass even rudimentary gun safety measures in the Senate. While liberals watch in horror the rising death toll from mass shootings, conservatives, who believe all gun rights are in jeopardy, make it difficult for Republican lawmakers to compromise.

In the US they prepare for the increase in interest rates 2:32

The political divisions are also accentuated by the mixed reception of the televised hearings of the select committee of the House of Representatives that investigates the insurrection of the US Capitol. The panel is showing how close the US came to an authoritarian takeover with former President Donald Trump’s attempted coup. But the new evidence is being largely ignored by his supporters, reflecting the GOP’s turn against democracy and raising the stakes for the upcoming election.

The tense national mood is likely to be exacerbated if, in what would be twin wins for the Conservatives, the Supreme Court rules against majority public opinion and loosens restrictions on guns and strikes down women’s right to abortion in the next few days. One man has already been charged with trying to kill conservative Justice Brett Kavanaugh, reflecting the charged atmosphere surrounding the court and the politicized issues he is set to rule on.

Things are also unsettling abroad. The United States is financing a war against Russia in Ukraine, which — despite Biden’s success in reviving the West’s Cold War front against Moscow — is turning into a costly stalemate. A confrontation between the superpowers and China will strain US resources, and a new nuclear crisis with Iran could soon join the one with North Korea.

Without a doubt, these are difficult times. But you also need to have some perspective. Biden is right to point to strong job growth that has driven unemployment to such low levels that it could cushion the impact of a potential recession triggered by the Fed’s aggressive attempt to cool inflation. And for the first time in two decades, the United States has no troops on the ground in a major foreign war. A snapshot of almost any moment in US history could reveal the political struggles over the fate of the country and the extent of the rights conferred by the Constitution. Even if a recession does come, there is hope that it won’t be on the scale of the 2008 financial crisis or the Great Depression nearly 100 years ago, though that will be of little comfort to anyone who loses their job.

The din of the current crises will inevitably have more immediate political repercussions for Democrats in Congress, who face a dire environment with less than five months to go before Election Day.

Midterm elections are often detrimental to first-time presidents. Biden’s eroding approval ratings and the White House’s difficulty in projecting control threaten to hand over both the House and Senate to Republicans, prolonging a political era in which almost every election seems to turn into a repudiation of the Republicans. who are in power and a recalibration of voters’ decisions from the previous election.

It is debatable how much Biden could do to improve the economy and all the problems that afflict the country. But the reason he professes for his victory in 2020 — that he was elected by voters to fix problems — is unraveling. And while the White House has taken multiple steps to fix things — including expanding the use of wartime powers under the Defense Production Act, releasing millions of barrels of oil from national reserves, and mounting supply of baby formula from abroad—their efforts have not always been effective.

Especially when it comes to inflation, the White House has delivered an often confusing political message, as officials vacillate between saying there’s not much more Biden can do and highlighting multiple plans to show the president understands the pressure on him. Americans suffer. But given the reality of rising gas prices, Biden finds himself in a tough political spot, unable to take credit for the positives of the recovery as many people just aren’t feeling the strength of the economy in their lives.

At times, Biden has seemed to take credit for what’s working in the economy and blame others for what isn’t: rejecting criticism that his stimulus spending fueled inflation and dismissing high gas prices as “gouging prices” of the President of Russia, Vladimir Putin.

US companies continue to hire despite high costs 1:03

Last week, the US president lashed out at big energy companies for their bulging profits, in what may be a clever political move to embolden Democrats, but may not help lower gas prices.

Biden’s remarks in an interview with the Associated Press last week that Americans are “very, very depressed” after years of pandemic deprivation and political division were consistent with his promise to always tell Americans the unvarnished truth, But they didn’t necessarily paint the picture of a president with the ability to inspire the nation in difficult times.

This is especially troubling as his comments coincided with a proactive White House attempt to dampen speculation about Biden’s re-election intentions amid a growing debate over his age. He will be 82 years old between the next presidential elections and the investiture. Every time the White House says that he intends to run for office, it only feeds the stories about Biden’s political situation. But there would be far less murmuring in Washington about his future if economic conditions were better.

things could get worse

The grim reality for Democrats — and for hard-pressed Americans — is that things could get worse.

A combination of stubbornly high inflation and mounting job losses in an economy slowing due to Federal Reserve action would be an even bigger political disaster for the White House. The administration already has limited credibility when it comes to talking about the economy after repeatedly downplaying the risks of inflation last year and insisting it was a temporary phenomenon. Treasury Secretary Janet Yellen is one of the few officials to admit she was wrong, as she did in a recent CNN interview. On ABC’s “This Week” on Sunday, she insisted that while inflation was “unacceptably high,” a recession was not inevitable. Brian Deese, director of Biden’s National Economic Council, delivered a similar message on other Sunday talk shows.

For her part, Energy Secretary Jennifer Granholm added to the confusion of messages about Biden’s upcoming trip to Saudi Arabia by saying she thought Biden would meet with Crown Prince Mohammed bin Salman, whom US intelligence services blamed for having ordered the murder of The Washington Post columnist Jamal Khashoggi. Biden said last week that he was not going to the kingdom to meet the crown prince, but that he would attend an international meeting of regional powers at which he would be present.

The dance on the head of a rhetorical pin reflects an apparent desire by the administration to mend relations with the Saudis to ensure increased oil production that could drive down gasoline prices. But it’s also a reflection of the backlash Biden is facing from some Democrats for loosening his stance on a nation he once called a “pariah.”

In the United States, the administration’s woes are good news for Republicans, who are banking on winning big in the midterm elections and have an easy time arguing that Biden’s economic plans aren’t working. Any improvement in the inflation outlook is unlikely to be enough to change the political environment before November. And a protracted fight against rising prices and a possible recession could haunt Biden when the 2024 campaign heats up after November.

This is giving Democrats a lot of heartburn, as Trump shows all the signs of launching a campaign for his old job, despite evidence of his extremism and abuses of power uncovered by the House panel. Representatives at their televised hearings.