Alphabet, the parent company of Google, this week settled a series of lawsuits against shareholders over its handling of sexual harassment complaints, which the company has been handling since 2018. Alphabet now agrees to greater oversight of its board of directors in future cases of sexual misconduct and pledges to spend $ 310 million over the next ten years on corporate diversity programs. The settlement was filed in the California Supreme Court on Friday.

In 2018, several reports revealed that Google had fired several employees since 2016, including senior company executives, for reasons of sexual harassment. Some of them had received large sums of money as a result of their dismissal, which provoked a reaction from thousands of employees who had decided to leave their posts to demonstrate against this act. For example, the company reportedly approved a $ 90 million exit plan for Andy Rubin, a top executive, after he was repeatedly accused of sexual harassment.

Among the various demands of the demonstrators, one distinguishes: the immediate end of the forced arbitration which required employees to settle in private rather than in court, cases of harassment, assault and discrimination. Sundar Pichai, CEO of Google, responded a few days later with a letter in which the company announced it would change its policy on arbitration, but only in cases of harassment and assault. Other employees from other companies have also pushed their employers to do the same. 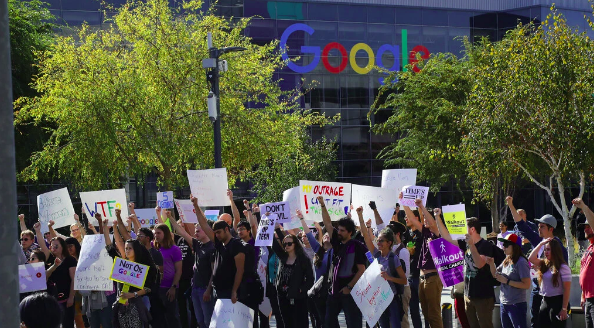 Two years after these facts, Alphabet this week settled some of these complaints. According to a New York Times report, the company consolidated five lawsuits in California into one under the deal. One of them, brought by James Martin, shareholder of the Alphabet group, considers that the members of the board of directors of the company had allowed illegal behavior to proliferate, ignored their fiduciary obligations and that they had become vectors of harassment and sex discrimination. Alphabet filed the settlement in the California Supreme Court in which it took a series of resolutions.

First, the group expressed its support for greater oversight of its board of directors in future complaints of sexual misconduct. He said second that he is committed to spending $ 310 million over the next ten years on corporate diversity programs. Third, and more importantly, Alphabet also said that employees would no longer be required to resolve their disputes with the group through private arbitration. This point responds to one of the major demands made by employees two years ago.

According to Julie Goldsmith Reiser, a partner at Cohen Milstein Sellers & Toll, one of the companies representing the group’s shareholders, the pledge of $ 310 million is significant, as the tech giant was paying the money directly when it was intended. solve one of the fundamental problems of society. The regulation fundamentally changes Alphabet’s workplace policies, said Julie Reiser. It feels like we’ve given society the tools to become a better place to work, she added.

In a fourth pledge, the company said it would limit confidentiality restrictions when dealing with harassment and discrimination cases and prohibit workplace relationships between managers and subordinates. While complaints filed in California appear to have been resolved through the deal, there are still other pending lawsuits in other states, including one in Federal Court and one in Delaware. Indeed, federal cases are on hold pending the outcome of the trials in California.

However, the Delaware case is being mediated. These new rules come to clean up a little more the policies of Alphabet, in particular of Google. The group has undergone a significant guard change over the past few years. Larry Page and Sergey Brin, who founded Google more than two decades ago, left their daily roles at the end of 2019. They maintained their place on the board of directors of Alphabet and Pichai is now CEO of Alphabet and the Google subsidiary. . Others also left the company in 2019 and later this year.

David Drummond, a longtime corporate lawyer who kept his job even after details of an extramarital affair he had with a woman who worked for him became public, left Alphabet this year. Eric Schmidt, the former CEO of Google, who was involved in company events with women he saw in extramarital affairs, left the board in 2019. Also as part of the deal, Alphabet agreed to form an advisory council focused on diversity, equality and inclusion.

The new board will be made up of four executives, including Sundar Pichai and three outside experts, including Nancy Gertner, retired federal judge. It will look at a wide range of concerns, including hiring and retention, compensation, and how Alphabet responds to and investigates employee complaints. Finally, it was also decided that Google employees who are the subject of an investigation for allegations of sexual misconduct, sexual harassment or retaliation will not receive termination pay or other compensation when they leave the company.

This is already the case for employees dismissed for misconduct. The new policy believes that even if an employee is not made redundant, his severance pay will also be based on his behavior.

What do you think ?

Some Googlers are offended by Larry Page and Sergey Brin’s decision to withdraw from Alphabet, when, according to them, the culture of the company is not in good shape