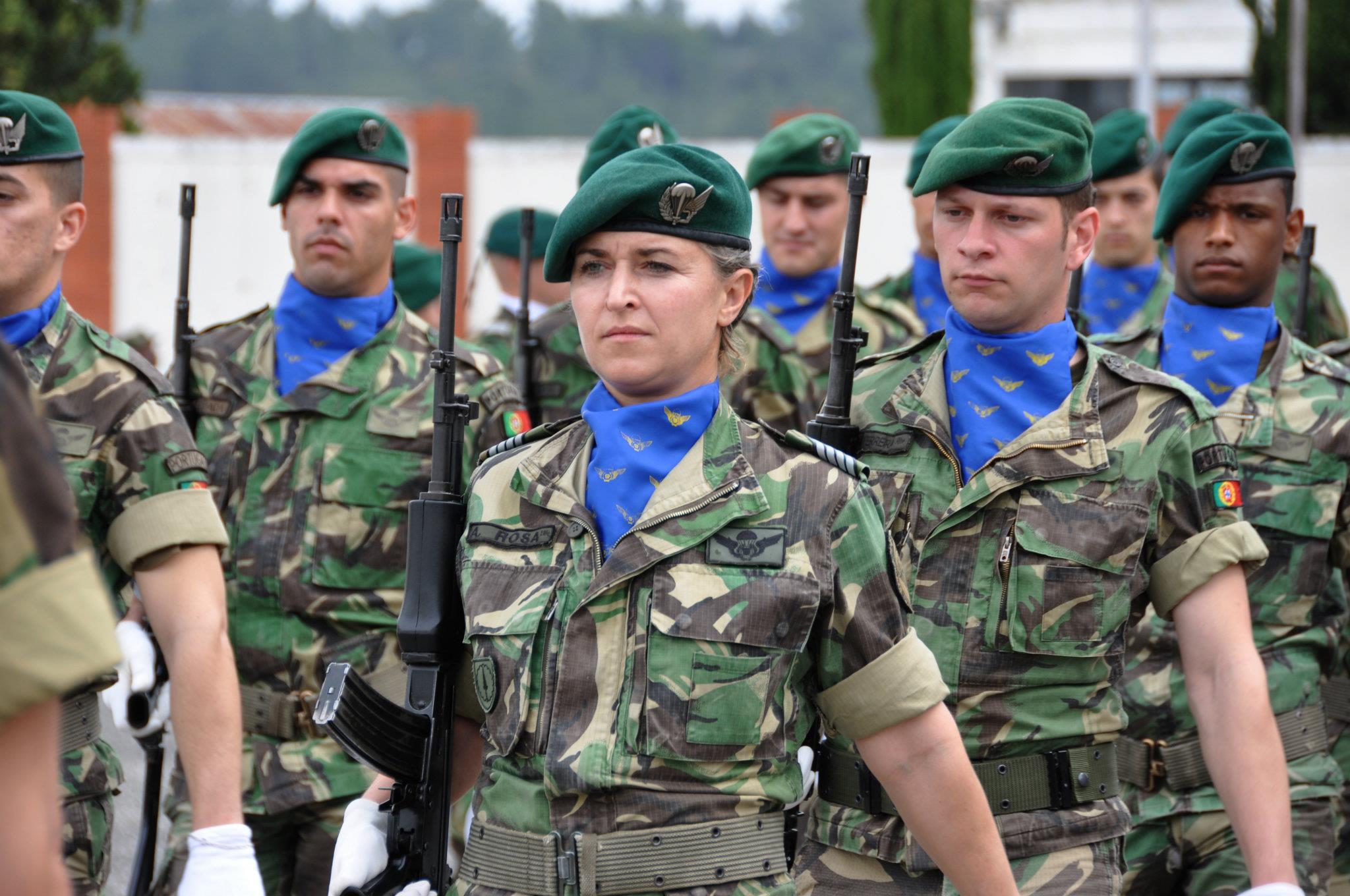 Take a good look, feel respect / They have wings on their chests / Heads held high, heroes of the air / Green berets are passing / (…) From heaven, we ask / To die on earth / Giving the life that God gave us / Green Berets ascend to heaven.
In Anthem of the Portuguese Parachutists

She was the first female military parachuting instructor in Portugal – and, until now, the only one to have the honor of wearing the blue that identifies the soldiers who give training. Alexandra Serrano Rosa was, for this reason, an icon among the “green berets” and a figure much loved by everyone, especially at the Tancos Air Base, to which she has been linked since 1994, despite currently serving in the Campo Militar de Saint Margaret.

Her death, aged 52, in a 1,500-meter jump where the parachute opening system failed – the circumstances of the accident are still under investigation – left everyone who knew her in shock.

It was supposed to be a routine jump, one of thousands he had already performed. According to the Army, the soldier was going to perform a “manual opening jump to maintain the parachutist qualification”. However, “during the execution of the jump, the parachute system did not work properly”, and an “investigation process is underway to determine all the circumstances in which this accident occurred”.

Her father, Sergeant Major Serrano Rosa (already retired), one of the great references in national skydiving and passionate about photography, took the last images of Alexandra boarding the C-295 plane, on the morning of Thursday, 21 April. He kissed her goodbye and photographed the soldiers’ heels, unable to imagine the tragedy that would follow.

That same day, Marcelo Rebelo de Sousa sent his “deep sorrow” over the death of this soldier by telephone to Alexandra Serrano Rosa’s father, and published a message of condolences on the official website of the Presidency of the Republic.

The mayor of Entroncamento, Jorge Faria, on behalf of the entire municipal executive, also presented “the deepest condolences to the family of Alexandra Maria Damião Serrano Rosa, with deep sorrow and pain”.

On April 25, Alexandra would celebrate 30 years as a paratrooper. It was on that day in 1992 that she received the brevet and green beret that she had dreamed of since she was a child. The first women who graduated as paratroopers in this course remembered her in a celebration that was drained of any joy due to her absence.

Her father, Alfredo Serrano Rosa, is one of the great references in national skydiving and Alexandra still barely knew how to walk, she would go with him to see the planes and the heroes that jumped from the sky.

She dreamed of the same fate, fascinated by the fearless spirit and the code of honor of those who wore “wings on their chests”, but the fact that she was born a woman cut her way.

When the first course was opened to women, then in the Air Force, there was no way to stop what her heart asked of her. He had just married, a 2-year-old son and another career to follow, but he applied, entered… and changed his whole life.

An inspiration and an example

Alexandra Serrano Rosa was born on September 25, 1969 in Elvas, but moved at a very young age with her family to Entroncamento, where she continued to live. After joining the Army, she began to serve at the Tancos Air Base, in Vila Nova da Barquinha, where she soon distinguished herself among the paratroopers.

“She was an outstanding book writer, an aerial equipment specialist. She had a good part of her career in the air equipment center of the current paratrooper regiment, she was a specialist in the airborne area,” Major General Agostinho Costa recalled this week to CNN.

It was for this reason that in 2012 she took another leap in her career, becoming the first – and only – female military parachuting instructor in Portugal.

Major General Agostinho Costa, who made several jumps with the sergeant-major, defines her as someone who “was dedicated, hard-working, embodying everything that is expected of a paratrooper. All. A taste for adrenaline, for camaraderie, that feeling that you only experience in skydivers, a true sense of friendship, a discipline with a human face.”

Alexandra was a “good-natured, positive-spirited, friendly woman”, highly respected by her peers. “She had leadership. She didn’t masculinize herself, she was a classy woman, very affable.”

“She was an outstanding book writer. And a dedicated, hardworking soldier, embodying everything that is expected of a paratrooper. All. A taste for adrenaline, for camaraderie, that feeling that you only experience in skydivers, a true sense of friendship, a discipline with a human face.”

Major General Agostinho Costa regrets that a soldier with all her qualities was lately “on land”, in the Military Camp of Santa Margarida. “A military woman with the training she had, a skydiving instructor, an excellent book writer, an aerial equipment technician, was in Santa Margarida taking care of a secretary. But these are the things that this Army has that no one notices,” the soldier said in an interview with CNN.

Duarte Costa, Brigadier General and Former Commander of the Paratroopers, also remembers her as a woman with “an easy smile, clear eyes, strong presence, sweet bad temper, and above all a friend, a comrade, a pure and good person who in On many occasions it was an unavoidable support in the command action of this former Commander of the ETP, the Mother House that was, is, and will always be his House, his Unit of the heart.”

On the day of the soldier’s death, Duarte Costa shared his pain on Facebook. “He touched us all with his strong personality, with his dynamics and with this life that he had, and that overflowed, and infected us all. We lost a lady of spades, a professional who always stood shoulder to shoulder with her peers, a woman who assumed her feminine condition as an asset in everything she did and who always stood out as a highly professional soldier, as a true woman of weapons.”

And, addressing Alexandra, he wrote: “Only one thing makes me less sad: you left with a parachute on your back and doing the thing you loved the most.”

“He touched us all with his strong personality, with his dynamics and with this life that he had, and that overflowed, and infected us all.”

Sergeant Major José Neves, from Entroncamento, his friend and military comrade – belongs to the Permanent Staff in the same unit and was his colleague in the 22nd Sergeant Training Course – speaks with emotion of Alexandra Serrano Rosa. “She was a strong woman, a friend of her friend, able to take her clothes off to help others. An excellent friend who practiced camaraderie daily, a true example of energy and with enormous dedication at work. She put all the effort into her daily life, through her physical and intellectual abilities.”

Psychologist Inês Roseiro Martins, her friend, says she doesn’t remember not knowing “Xana”, as she was treated by her closest friends. “Always with a light smile, with a hug so tight that it will be hard not to feel it again. She liked little of these expressions of love and gratitude. It was practice. It was assertive. A reference.” Recalling the pride her friend had in her green beret, she says that she lost herself “a woman of struggles, of causes, of love. A mother, a daughter, a friend was lost.”

“May the losers never know each other”, is the paratrooper’s motto. Alexandra lived until the end with that spirit, always with wings on her chest.