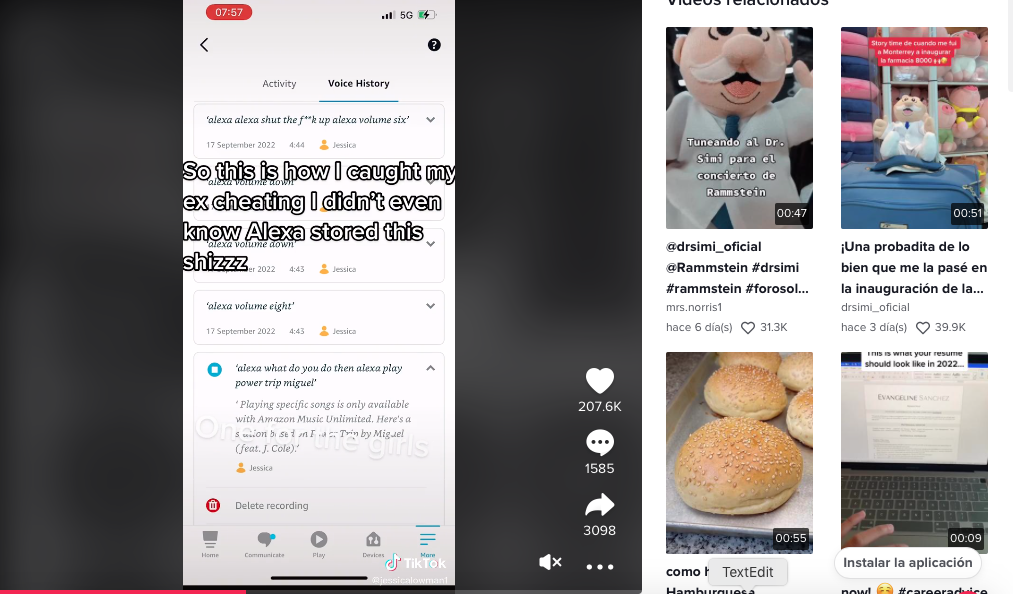 Digital platforms have become the best tool for people around the world. This is the case of the story of a woman who shared how Alexa helped her discover her boyfriend’s infidelity.

Among these platforms is Alexa Amazon’s voice assistant that has registered millions of users around the world since its creation. A virtual assistant is a software agent that assists computer system users by automating and performing tasks with minimal human-machine interaction.

The rapid penetration of this type of device and software in the technology market it is very noticeable because, according to a report by Business Wire, it is expected that by 2024 it will register a use in the world of 8 thousand 400 million participants.

Another study carried out by Voicebot.ai has a classification where the devices of this style stand out with a greater impact in 2020, especially with Alexa, which belongs to Amazon, with 110.2 million, and Google Assistant, with 97.3 million. .

In turn, the consulting firm Boston Consulting Group details it new generations of users of electronic devices, such as millennials and the so-called Generation Z, they prefer to use virtual assistants instead of talking to real people in certain activities.

By TikTok, a woman said that thanks to Alexa, she discovered that her boyfriend had been cheating on her.

Jessica Lowman revealed that thanks to a secret function of Alexa, she managed to obtain all the voice recordings that the voice assistant stores.

“This is how I found out my ex was cheating on me,” Lowman said in his video.

Also in the video registered 3.6 million visits in 48 hours, the woman explains that she did not know that Alexa saved the searches.

See also  Amazon releases the 'battery base' to take the Echo anywhere! Here's how it is made and how much it costs

Lowman reproduces the sound in the video, where a woman’s voice can be heard asking you to play a specific song: “Alexa, play ‘Power Trip’ from Miguel”, said the voice of the strange woman.

In that same recording, Lowman adds that there was also the history of that same day, when just a minute later her boyfriend’s voice is presented asking Alexa to turn up the volume of the track.

The recordings prove that the woman was with her boyfriend in Lowman’s house, which led to an infidelity.

After realizing this Alexa option, Lowman encouraged other women to access their own voting history to see what was going on in their homes while they were away.

So another woman chimed in and said she also caught her boyfriend through Alexa: “That’s how I found out too! I listened to a whole date night!” he said.

Although seen as a secret feature, Amazon has always allowed the owner of Alexa to access all recordings in the “Review voice history” section in the privacy settings.

This story shows us how important social networks can be in today’s world. An example is a woman who, thanks to the social network Facebook, managed to reunite with her half-sister after 10 years apart.

And this is how technology has come to help us in many parts of our lives, especially to reveal information and even communicate in a better way.