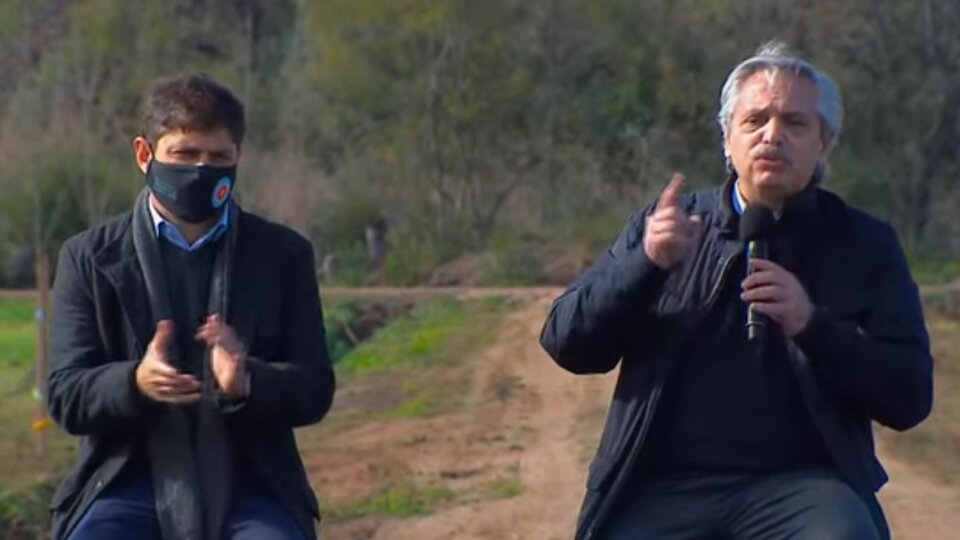 Alberto Fernández announced this noon in Mercedes a total investment of 77,200 million pesos to advance in infrastructure works to generate 30,000 lots with services and 11,800 credits for the construction of the first house on those lands for families throughout the country. But also devoted a good part of his speech to talking about the pandemic. “The pandemic it was not finished, in some places in the interior of the country, the pandemic is exhibiting tremendous voracity. We were talking with Axel about a strain from India to see what precautions we have to take so that it does not enter and ruin everything we have done. The vaccine helps a lot, but it doesn’t do everything “said the President.

“I am happy because we are launching an idea that we designed with Jorge: to give people the possibility of accessing not only a house, but also a piece of land. And that which seems easy is not. get the land, “the President began his speech. And he added: “There needs to be a sports center, a school where children study. All this happens in the middle of a pandemic and none of this would be possible and none of this would be possible without the work of health personnel, who never he lowered his arms and of the people who took care of himself “.

Later, Fernández took care to clarify that the pandemic did not end. “When you look, everything becomes more valuable because the pandemic is not over, in some places of the interior the country’s pandemic is exhibiting tremendous voracity.

“We were talking with Axel about a strain from India and seeing what precautions we have to take so that it does not enter and ruin everything we have done. The vaccine helps a lot, but it does not do everything.”

Regarding the issue of land and his own house, which led him to do the act, Fernández said that “it makes no sense to have unproductive land for a child to inherit. EThe sense of solidarity is what we must rescue the most in this time of Argentina. For a long time they said that the State was a burden for Argentina. But when it appears, it is to side with the weakest. Many people believed that it was solved with UVA credits. But it is not the way. These things are not resolved with the will of the market, but when the State is present. “

“We have already delivered 10,000 houses that could have been delivered by the previous government. Possibly they did not do so so as not to remember who made them. Next year we are going to deliver 100,000 houses for 100,000 families and that is really the only thing that matters to me.” , continued the president.

“It must be clarified that we are not giving away these houses, it is an accessible credit that whoever works will pay, because this is not a business for banks, it is a business for people. One of the challenges we have as a country is to avoid the migration of those who are not born in Argentina, “said the President.

The president was accompanied by the Minister of Territorial Development and Habitat, Jorge Ferraresi; the governor of Buenos Aires, Axel Kicillof, and the mayor of Mercedes, Juan Ignacio Ustarroz. During the ceremony, lands were given symbolically; Various agreements were signed with the province of Buenos Aires and the city of Mercedes, and specific agreements were announced with different municipalities throughout the country.