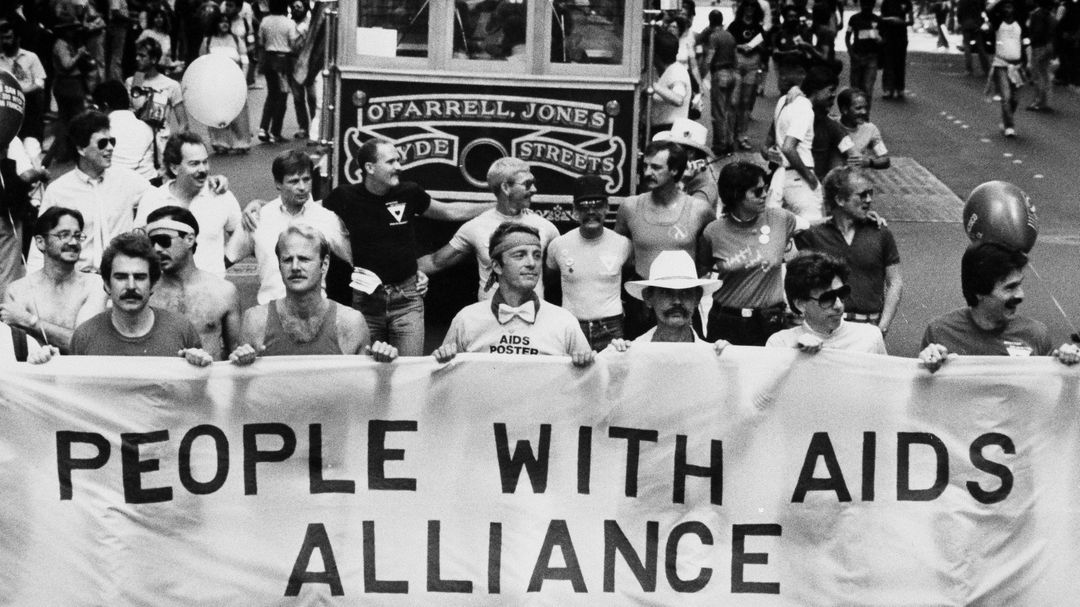 The virus is creeping in. First, five healthy men in their 30s become infected with a rare lung disease that normally only affects people with weak immune systems. Then there will be more and more. Many of the sick – predominantly “homosexually active men”, as it is called in an initial medical report – do not survive the virus. Of the five early patients, two also die in California hospitals.

They suffer – and this is similar to the beginning of the corona pandemic – from a rare pneumonia. More than 32 million other people worldwide are victims of the virus. The US health authorities first reported the mysterious new disease on June 5, 1981. The AIDS epidemic is taking its course. Til today.

When it comes to infections, Sars-CoV-2 and the HI virus have little in common. HIV is very difficult to transmit in everyday life. Kissing, coughing, speaking – that’s not enough for this pathogen. It needs direct blood-to-blood contact. 90 percent of the time, this happens during sex. It is completely different with the corona virus. Droplets or aerosols emitted when breathing are sufficient and the pathogen spreads to humans.

Despite this difference, both viruses have caused global crises, including panic and fear. But while Corona becomes a permanent global issue shortly after the outbreak, AIDS remains a disease of the so-called risk groups for a long time. But what both have in common: Regardless of whether it is HIV or Sars-CoV-2, when it comes to infections, the guilty party is sought and people are discriminated against. Especially in the case of HIV.

40 years of HIV – cures and vaccines are missing

Forty years after it was discovered, the virus is still there and undefeated. In expert circles one speaks of a pandemic, the World Health Organization (WHO) calls it a “global epidemic”. It only took a few months for the disease to get its name in December 1981: “acquired immune deficiency syndrome”, the long form for AIDS.

But while at the beginning of the corona pandemic it quickly becomes clear which pathogen triggered the “mysterious lung disease” in Wuhan, China, the French virologist Luc Montagnier and the virologist Françoise Barré-Sinoussi only discovered two years after the first cases that AIDS was caused by a infection, which often goes unnoticed, is triggered. So from HIV, the human immunodeficiency virus.

Only with this knowledge is there a feverish search for vaccines and remedies. In the case of AIDS, even today. The HIV virus continues to spread across all continents, there is no vaccine against it. In 2019 alone, around 690,000 people died as a result of AIDS. Southern Africa is hardest hit worldwide. The number of infections has also risen sharply in Eastern Europe and Central Asia in recent years.

In Germany it sometimes seems as if the disease has disappeared from the public consciousness. According to the Robert Koch Institute, almost 100,000 people currently live with the HI virus in this country. It is estimated that around 11,000 of them do not know which dangerous virus they carry. According to Deutscher Aidshilfe, around a third of diagnoses are only made when a serious illness occurs. Every year, 1,100 people in this country contract AIDS or suffer a severe immune deficiency, although it would have been preventable. Instead of a mask against corona, the condom is the symbol of preventive protection in this crisis.

People who live with HIV are faced with this problem every day: ‘Am I telling my employer, my friends, am I hiding the medication from the children?’

According to the study “Positive Voices 2.0”, commissioned by the German Aidshilfe, around half of those who are HIV-positive still experience discrimination today and feel impaired by it. 59 percent of those questioned experienced discrimination in the healthcare sector in the past year, and every fourth person was denied a service, for example at the dentist. 24 percent of the study participants perceive HIV as a punishment for their actions. 73 percent state that in many areas they do not speak openly about their HIV infection.

“People who live with HIV face this problem every day: ‘Am I telling my employer, my friends, am I hiding the medication from the children? What if I get to know someone, should I say it right away? ‘”Says Annette Haberl from the German AIDS Society. There are still prejudices in the medical field as well. “Finding a dentist who treats HIV-positive people can be difficult.” And there is always the fear of rejection that accompanies infected people every day.

The beginnings of the HIV / AIDS and corona pandemic are similar

“I am already discovering certain similarities between the corona pandemic and the beginnings of the HIV / AIDS pandemic,” says sex scientist Franziska Hartung, who researches HIV-related discrimination and stigmatization at the Institute for Democracy and Civil Society in Jena. In the 1980s, as with Covid today, people reacted to AIDS with collective uncertainty and fear.

“At the beginning, you only knew that AIDS was fatal and that it mainly affects gay men,” she says. That was also the starting shot for the “search for scapegoats”. The risk groups included not only gay men, but also sex workers and drug users. “These groups are not viewed as particularly worthy of protection, but as danger groups for the general public,” explains Hartung.

The “drivers of the pandemic”: Collective blame does not help

It is a mechanism that is also effective today with Corona. Asian-looking people, marginalized groups such as Sinti and Roma, large Turkish families, people from Eastern Europe who work in meat factories, sex workers: “These are groups that have repeatedly been named as drivers of the pandemic,” explains the scientist.

Such assignments of blame are counterproductive. Studies, including those from the Robert Koch Institute, show that marginalized groups are particularly often affected by Covid-19. “But that’s not because of their personal behavior, but because of the poorer prerequisites for protecting themselves, because of their poorer social positioning,” Hartung emphasizes. Poverty and social inequality are the decisive risk factors in the corona and HIV / AIDS pandemic.

It was about making quick decisions at the expense of the basic rights of minorities and thus enforcing a repressive sexual morality.

Politics plays a decisive role in this. In Bavaria, at the end of the 1980s, when the virus was raging particularly badly around the world, particularly repressive measures were discussed and partially implemented. Gay saunas were closed, compulsory quarantine for HIV-positive people was planned, and the word “camp” made the rounds in CSU circles. “HIV suspects” such as sex workers and drug users should be required to have tests. “It was about making quick decisions at the expense of the basic rights of minorities and thus enforcing a repressive sexual morality,” explains Hartung.

This type of pandemic control was overturned by the then Federal Minister of Health and later President of the Bundestag Rita Süssmuth, who made it clear in 1988: “There is no health protection without really working with those affected first.” It is much more worthwhile to educate people about HIV and AIDS, To put advice, voluntariness and solidarity.

Conspiracies and Myths: Where is the Origin of the Pandemics?

But that is often not far off: Even today, the question of where and how the corona pandemic originated is a reservoir for crude ideologies. There were plenty of myths about origins and conspiracies even in the early days of AIDS – and they still have an effect today. It is now known that HIV was transmitted from primates to humans in Africa at the beginning of the 20th century and reached the United States from the Belgian colonies in the Caribbean around 1970.

The myth of the origins of AIDS includes, for example, the story of what was supposed to be the first AIDS patient, “Patient Zero”, a promiscuous gay jet setter who is said to have carried the virus through the world on his travels. During the Cold War, there was also a conspiracy that the Russian secret service KGB created the virus as a biological weapon of war – or maybe it was the others, the US service CIA.

AIDS as “gay disease”, Corona as “virus of the poor”?

The narrative of AIDS as a “gay disease” has held up to this day, says researcher Hartung. Those affected will continue to be taught that they are to blame for the infection. “There are still a large number of people who do not know anything about their HIV infection and who think that a test is not necessary, for example because they do not belong to the so-called risk group,” reports the expert. This is often based on the fear of social exclusion.

With Corona there is a similar phenomenon, summarized under the term “Corona Shaming”. This includes experiences in which some people who tested positive for Sars-CoV-2 are hostile and personally made responsible for the infection and excluded. And while infections in the leisure sector are considered morally reprehensible, for example, they are often tolerated in a professional context, says Hartung.

The expert’s prognosis is sobering: “I fear that Corona will become the virus of the poor worldwide.” A signal for this is already the unfair distribution of vaccines against Covid-19 in the world. It is similar with the AIDS medication. With early treatment, those affected can usually continue to live well with them. But this also requires access to the medicines. And according to the latest UNAIDS report, only 26 of the approximately 38 million HIV-positive people in the world currently have this.