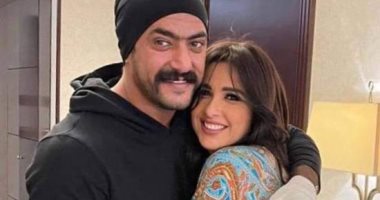 The artist Ahmed Al-Awadi asked his followers and fans through his account on the “Facebook” website to pray for his wife, the artist Yasmine Abdel Aziz, stressing that she is currently in intensive care and needs prayers from everyone, and he also demanded that everyone not know any information about her except from him, saying: “Oh, people, after your permission. Any statement about the situation is through me only, and I did not say any statement about Yasmine, except that I asked you to pray for her.” He continued: “She is in care now and needs your prayers.

A number of artists had prayed to Yasmine over the past hours, such as Ahmed Helmy, Mona Zaki and Karim Fahmy, in addition to a large group of her friends who demanded their audience to pray for her through the social media.

It is noteworthy that Yasmine Abdel Aziz had participated during the last Ramadan season in the series “Elly Malush Kabir”, along with her husband Ahmed Al-Awadi, in addition to the stars: Khaled Al-Sawy, Mahmoud Hafez, Donia Abdel Aziz, Ahmed Abdullah Mahmoud, Ahmed Saeed Abdel-Ghani, Eman El-Sayed, Badria Tolba, Aida Riad, and others, and the work was written by Amr Mahmoud Yassin, directed by Mostafa Fekry, and produced by Synergy Company..