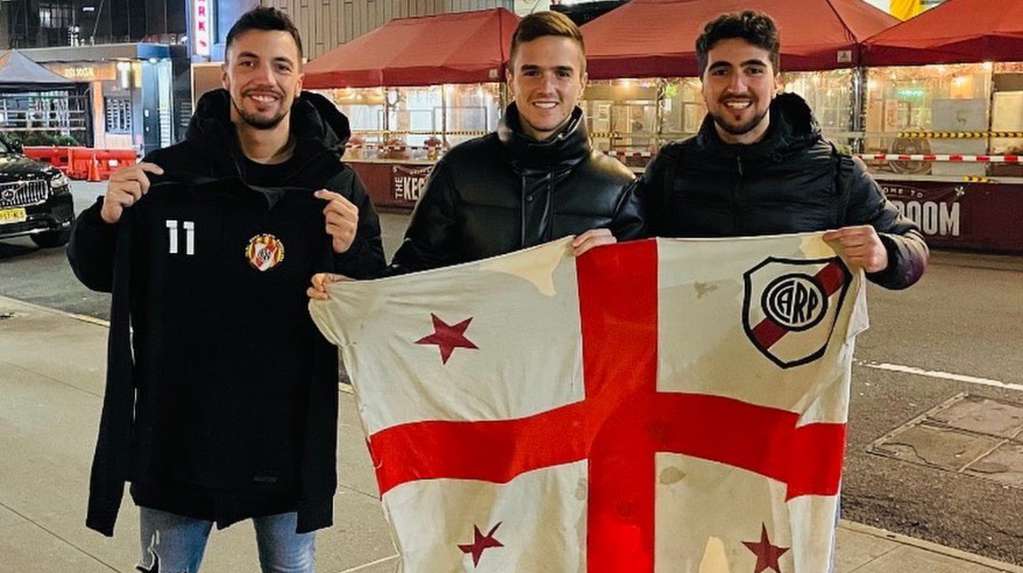 Agustín Palavecino’s response that surprised a River fan in New York: “I saw your message, if you want we will meet”

New York, the most densely populated city in the United States, witnessed a story that joined the conviction of a River fan with the humility of one of the most outstanding Millionaire footballers of the year, Agustín Palavecino, throught social media. The result was a meeting between the two that left a photo as proof and an unforgettable memory as an inheritance.

The message that gave rise to history

“I came to New York only to find Palavecino and force him to stay in River”, the Argentine announced Pablo perez on December 29 from Manhattan, NY, where he was out for a walk. In that city, of course, Agustín Palavecino is on vacation, where he clears up after a very loaded year with the Millionaire in which he went from lowest to highest until he was key in the conquest of the Professional League title.

Read also: River seeks more reinforcements: he made an offer to Independiente for Fabricio Bustos

In the middle, a detail: the name of the confident fan is Pablo Pérez, just like the footballer who passed through Boca at the time and he knew how to be one of the most repudiated by the Millionaire partiality. “That will always haunt me”, said the boy a little jokingly, a little seriously, in statements to Ole.

The story had an incredible continuity. Palavecino not only saw the message but also responded to Pérez through a private message on Instagram: “Hello Pablo, How are you? I saw your twitter, if you want we can meet and take the photo ”, the footballer proposed to him.

See also  Riquelme and a mischievous reference to River: "They are always..."

There they began to message each other and the former player of Platense shared with him the address of the hotel where he is staying with his girlfriend, Estefania Steinmeier, and there was Pablo along with his brother, Gonzalo, two Argentines who have lived in Barcelona for a while and there are members. the soccer team of the River subsidiary in that city of Spain.

The three of them took a photo and Pablo happily posted: “I invite you to know the end of this wonderful story. Humility and greatness ”, He qualified, before raving about Palavecino, who received them and shared a talk with the Pérez brothers, to whom he confessed that his dream is to play -and win- the Copa Libertadores with River, according to Pablo in the hundreds of messages he had in your Twitter account as part of the impact of your story.

River paid another part of Palavecino’s pass, Gallardo’s bet that excites the fans

At the beginning of December, River Plate paid 1.7 million dollars for 30% of the economic rights of the midfielder Agustín Palavecino, one of the figures of the team led by Marcelo Gallardo.

It was after Pala scored two goals against Rosario Central in Millonario’s 2-2 draw in Arroyito, three days after the footballer himself scored the first of four goals against Racing that gave Millonario the title of Argentine soccer champion.

At the beginning of 2021, Núñez’s club paid Deportivo Cali 1.8 million dollars for 35% of the pass of the steering wheel emerged in Platense, with the commitment to pay another 30% at the end of a season.

See also  "WE ARE GOING TO FIGHT IMPORTANT THINGS": Juanfer #Quintero, HAPPY to have returned to #River - ESPN Fans

The remaining 35% of Palavecino’s economic rights will continue to be owned in equal parts by Cali and Platense, who will distribute the benefits of a future sale on that percentage of the pass that they are going to keep.

Palavecino debuted in River on February 20, just in front of Rosario Central, when the club premiered the synthetic turf, and since then it has played 42 games, 27 as a starter and 15 from the substitute bench, to add 2,353 minutes on the court.

The detail that marks this continuity is that Since that game at the start of the year, River played 49 games and Palavecino participated in 47 calls, without playing in just five games, in which he remained on the substitute bench.

Although he had a drop in performance at the start of this semester after starting after that goal to Boca last May, he recovered quickly and was a key part in the series of eight consecutive wins and 17 undefeated matches for the “millionaire” team.

Palavecino, along with the rest of the campus, must rejoin River training on January 10, when Marcelo Gallardo scheduled the start of the preseason.