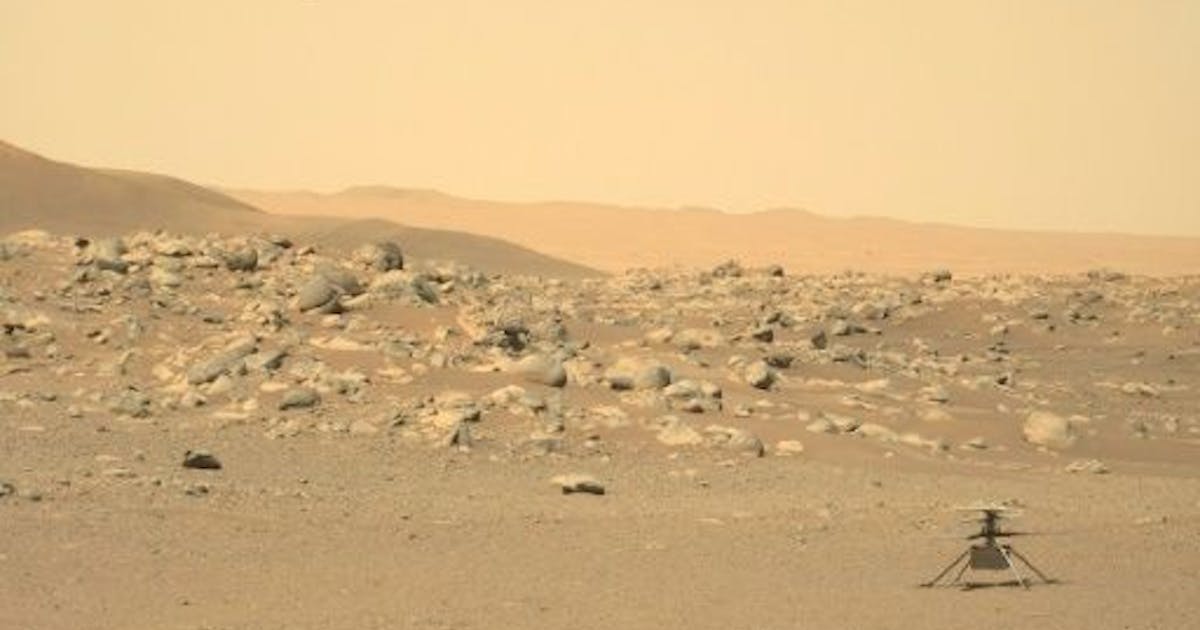 It was only supposed to take off a maximum of five times. Yet NASA’s Mars helicopter Ingenuity is now on its 12th flight. And there is no question of stopping there yet.

The NASA Ingenuity helicopter on Mars, photographed by the Perseverance rover on June 15, 2021

A photo of the Ingenuity helicopter, taken on Mars in April 2021

Illustration provided by NASA of the Ingenuity helicopter, which after more than six months on the Red Planet has gained notoriety among the general public

After six months on Mars, the NASA helicopter has reached new heights – Gallery

The NASA Ingenuity helicopter on Mars, photographed by the Perseverance rover on June 15, 2021

A photo of the Ingenuity helicopter, taken on Mars in April 2021

Illustration provided by NASA of the Ingenuity helicopter, which after more than six months on the Red Planet has gained notoriety among the general public

Faced with the resounding success of the mission, the US space agency extended it indefinitely. And the helicopter has become the traveling companion of the Perseverance rover, whose mission is to search for traces of ancient life on Mars.

“Everything is going so well,” jubilates Josh Ravich, head of the mechanical engineering team at Ingenuity. “We’re doing better than expected on the Martian surface.”

Hundreds of people contributed to the project, although only a dozen are still really involved today. Josh Ravich joined the team five years ago. “When I had the opportunity to start working on the helicopter, I had the same reaction as many: is it even possible” to fly on Mars?

The challenge is great, because the Martian air is of a density equivalent to only 1% that of the Earth’s atmosphere. By comparison, on Earth, it would be like flying a helicopter at an altitude of 30 km.

Ingenuity also had to resist a takeoff aboard a rocket, and a landing on the red planet, on February 18, after seven months of travel hooked to the rover from which it then detached.

Other difficulties: to survive the freezing Martian nights, by warming up thanks to solar panels charging its batteries during the day. And fly in autonomy thanks to a series of sensors, since communication delays between Earth and Mars prevent the sending of instructions in real time.

On April 19, Ingenuity made the first historic flight of a motorized vehicle on another planet. Exceeding all expectations, he then achieves 11 more. “We were able to cope with stronger winds than we thought,” says Josh Ravich.

“In the third flight, we had achieved all the mechanical objectives (…) and gathered all the information we hoped for”, explains to AFP this employee of the legendary Jet Propulsion Laboratory (JPL) of NASA, in charge of the ‘gear.

Since then, the latter has risen to 12 meters high and its last flight lasted two minutes and 49 seconds. In total, he covered a distance of 2.6 kilometers. In early May, Ingenuity made a first outbound flight without return, landing outside the runway that had initially been carefully chosen for its first month.

His sixth flight was then eventful: after rocking dangerously due to a malfunction in the photos taken in flight to help him stabilize, he finally managed to land safely, and the problem was repaired.

Ingenuity is now sent to scout to take pictures using a color camera – the only on-board instrument not being essential for its proper functioning. The objective is twofold: to ensure that the road is safe for the rover, but also that it is indeed of scientific interest, in particular from a geological point of view.

Ken Farley, Scientific Director of Perseverance, explained how, during the twelfth flight, the photos taken by Ingenuity of a region called South Seitha showed that it was turning out to be less interesting than previously envisaged. The researchers could therefore abandon the idea of ​​sending the rover there.

After more than six months on the Red Planet, the small 1.8 kg machine has gained notoriety with the general public, and is displayed on both mugs and T-shirts for sale on the internet.

But what is its secret to longevity? The environment has been “very cooperative so far: temperatures, wind, sun, dust in the air …”, explains Josh Ravich. “It’s still very cold, but it could have been worse.” In theory, the helicopter can still operate for a long time. But the winter period is approaching and could complicate matters.

So already, thanks to Ingenuity’s flight data, engineers are working on its replacement, the next generation of helicopters on Mars. “Something in the 20 or 30 kilos, capable of transporting scientific equipment”, details Josh Ravich.

Who knows, these future loads may be the rock samples currently being taken by Perseverance. NASA plans to retrieve them during a future mission in the 2030s.