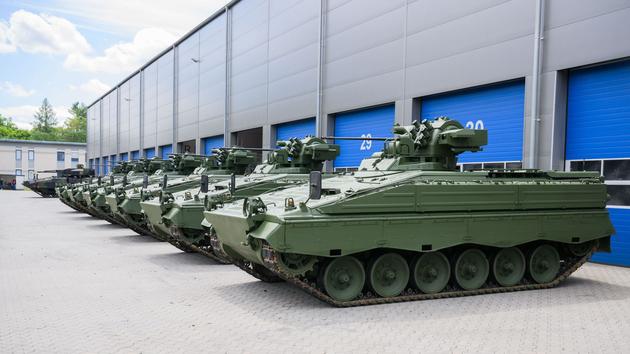 After France, Germany announces the delivery of light armored vehicles to Ukraine

Under pressure from his allies, Chancellor Olaf Scholz resigned himself to sending arms to kyiv.

After France, it is the turn of the United States and Germany to send new light armored vehicles to Ukraine. After the announcement, made jointly by Washington and Berlin, the two capitals detailed on Friday the nature of their military support for kyiv. Breaking with its traditional restraint, the government of Olaf Scholz will send for the first time to the front, and by the end of March, forty Marder tanks (Marten), as well as a Patriot anti-aircraft defense battery up to now reserved for Poland. Provided by the Bundeswehr, the training of Ukrainian pilots will last nearly eight weeks.

«It is logical that we take this step. Ukraine has the right to defend itself against the attack of Russia and it is our duty to help it to this endsaid Economy and Climate Minister Robert Habeck. The environmentalist party of the vice-chancellor, although heir to a long pacifist tradition, wants to be at the forefront on the question of arms deliveries.

Read alsoWar in Ukraine: “Russia has lost 60% of its combat tanks”, estimates the Director of the European Union General Staff

The Marder is not a tank but an armored personnel carrier equipped with tracks. In its philosophy, it is similar to the fifty Bradleys sent by the United States, referred to as “tank killers” by Pentagon spokesman General Pat Ryder. Like the latter, it has a small caliber gun (20 millimetres). The Marder was designed at the end of the 1950s in order to compensate for the shortcomings linked to the absence of motorized infantry capable of supporting heavy armored vehicles, in particular during the French offensive of the Wehrmacht on the Meuse in 1940.

See also  Raymond Domenech on Raphaël Varane's injury: "We don't take someone who will contaminate the whole preparation"

SEE ALSO – Westerners fear being seen as co-belligerents with Ukraine

For its part, the French AMX-10 is a reconnaissance tank, with a larger caliber (105 millimeters) but relatively light armor. Very mobile because equipped with wheels, it is able to change position quickly after delivering its salvos, and proves to be complementary to the two German-American machines. “This is a great victory for our country.”welcomed the Ukrainian President, Volodymyr Zelensky after the German announcement, even if kyiv regrets not having obtained heavy offensive armor from its partners, such as the French Leclercs, the German Leopard 2s or the American Abrams.

For Berlin, the operation confirms the slow transformation of Chancellor Scholz started since the beginning of the conflict on the issues of arms deliveries. For months, his government had alternately invoked the material deficiencies of the Bundeswehr and the lack of consensus within NATO to refuse the delivery of tanks, even though its liberal and environmentalist allies opposed the reluctance of the SPD. Instead of directly equipping Ukrainian troops, Germany carried out “circular exchanges”, delivering its vehicles to other EU countries (Poland, Czech Republic) which, in turn, supplied kyiv with armored vehicles. of Soviet origin.

Read the fileThis Ukrainian strike that shakes the Russian army

At the end of April, the manufacturer Rheinmetall had offered to deliver 100 units of Marder, reiterating a new offer in September. For their part, both NATO and the American ally have endeavored in recent months to discreetly dismantle Berlin’s arguments, explaining that the responsibility for deliveries fell not to the Alliance but to its member states. Opposite, a pacifist and influential fraction of the SPD continued a resistance that the Chancellor finally decided to brave. The direct delivery of Patriot batteries, hailed by the Polish neighbor, represents a “tour de force“, welcomed the inspector of the air force, Ingo Gerhartz.

In terms of form, the government’s initiative was received differently in Berlin. Some criticize Olaf Scholz for having missed the opportunity to “initiateon the European level, ultimately taking refuge behind a German-American declaration. The others accuse Emmanuel Macron of having pulled the cover to him, to the detriment of European unity. “If France acts as a motor and we simply turn the wheels, it is useless”, regrets the head of the Bavarian CSU, Markus Söder (opposition). In fact, Paris and Berlin worked in “close cooperation“, we repeat in the two capitals, which, in liaison with Washington, have been working on the subject for months.

Whatever the media modalities of the announcement, a political taboofell in Germany, notes the Spiegel. After the Marders, the way could be opened in the future for the direct delivery to Ukraine of large-caliber Leopards. Liberal and environmentalist allies of the government are campaigning in this direction.