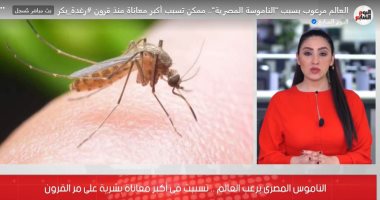 Special coverage conducted by the Seventh Day TV about the National Institutes of Health revealed “NIH”USA, reported that although many viruses are transmitted by mosquitoes, 4 of them have caused the greatest human suffering over the centuries, and continues to this day. These are the viruses that cause yellow fever, and Dengue, chikungunya, and Zika fever.

She said that it is clear that Africa is the ancestral home of the yellow fever, chikungunya and Zika viruses, and possibly the dengue virus. Several species of mosquitoes, especially in the genus Aedes aegypti, have transmitted these viruses and their direct ancestors among African primates for thousands of years, allowing inter-virus adaptation. Mosquitoes and primates.

Viruses transmitted by mosquitoes (arboviruses) Humans have been around for thousands of years and continue to cause untold suffering, although they are not the only viruses transmitted by mosquitoes, the following four were the most prevalent and well-known in terms of severity of disease and number of people infected: Viruses that cause yellow fever (YFV) وحمى الضنك (DENV) and chikungunya fever(CHIKV) and Zika fever (ZIKV) One of the mysteries about these four viruses is that a single mosquito (of more than 3,500 species), Aedes aegypti, was the carrier of nearly all major epidemics outside Africa..

Aedes aegypti is native to Africa where ancestral groups can still be found breeding in forests and ecological areas with caterpillars in tree holes. When humans began living in villages and countries in Africa, they began storing water in containers throughout the year, making this An attractive breeding site for mosquito larvae especially during long dry seasons, female Aedes aegypti were more favored for blood meals than most available sources: In humans, Aedes aegypti has spread to occupy tropical and subtropical human habitats on 6 continents today..