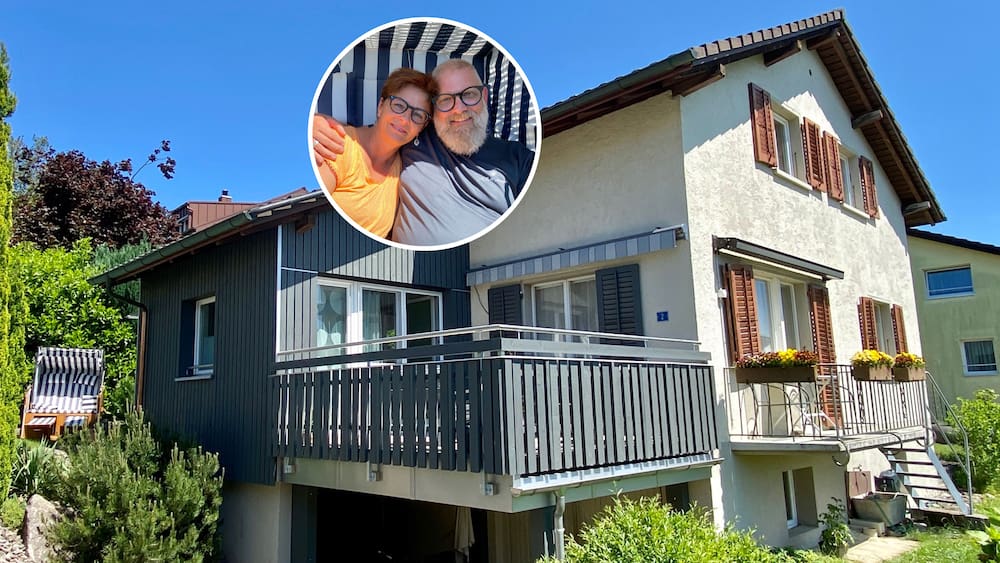 On his way to work, Stephan Mayer (50) happened to see a sale sign in the garden of a property from 1956 in Schneisingen AG. The trained carpenter and father of three daughters immediately got in touch as an interested party. Just a few days later, the family man received a call back because the supposed buyer was refused a bank loan. “The owner was a resident of the retirement home where I worked as a caretaker. She wanted to have a family live in her house. That was my advantage,” says Mayer.

There are also three more bedrooms or children’s rooms on the upper floor. “As was often the case with houses in the 1960s,” explains Mayer. But the house has a large garden, which was a dream come true for the family with the three little girls.

No time and money for renovation work

The Mayer family bought the five-room house with around 900 square meters of land for 570,000 francs in 2007. Except for two carpets in the upper children’s rooms, they left everything for financial reasons for the time being and happiness seemed perfect until the couple married in 2010 separated and Stephan Mayer stayed alone in the house with his three little daughters.

“I had other priorities. I had neither the time nor the money for a conversion, especially since I was just setting up my own business,” explains Stephan Mayer. Mayer also hoped that at some point he would find a new partner and that they could rebuild and renovate together. “Five years ago I tore out just one wall of a small room adjacent to the small living room so that we had a little more space in the living room.”

With Sandra Zehnder (52), the craftsman found a new love in spring 2020 and together the couple in love made conversion plans. “We have similar tastes and always agreed quickly,” says Zehnder. In June 2021 she moved into Stephan Mayer’s house. But already in autumn 2020 a new kitchen was installed and the couple planned to expand the living space on the ground floor. They also wanted to isolate and expand the semi-open balcony as a dining room and create a larger balcony with a cozy lounge area.

The client explains: “It took longer than expected before the building permit was available. We were only able to start in October 2021.” At the back of the house, the couple created another covered seating area with access to the new dining area. “We now mostly use this entrance to the house instead of the old side entrance because it’s closer to the parking lot,” says Zehnder.

Low costs thanks to a lot of personal work

A new oak parquet floor was laid throughout the ground floor. The old, creaking staircase to the upper floor is also in oiled oak.

The banister was painstakingly sanded down and painted by Sandra Zehnder. Some walls and ceilings were also painted or covered with wood and the existing old built-in cupboards were given a new coat of paint.

In the small bathroom on the ground floor, carpenter Mayer made a new wooden ceiling and installed two new mirror cabinets.

“It wasn’t enough for more at the moment,” says the craftsman. Mayer has invested around 130,000 francs in his conversion so far. This does not include his work. “We plastered, painted and laid the floors ourselves and only called in experts for the prescribed electrician work and sealing in the extended living space as well as for the plumbing work,” says Mayer.

Up until April, the couple worked on the conversion almost every day after work and at the weekends. Daughter Aline (20), who is the only one of the now grown-up daughters who still lives with her father, occasionally helped out and Mayer’s two apprentices, who often spend lunchtime with the boss, sometimes helped out.

“It was instructive for the apprentices that they could also carry out practical work on the building site in addition to the theory at school,” says Mayer. Friends and relatives also supported him in the conversion work.

Enjoy and save money for the next conversion stage

Apart from a few details, the conversion is complete and the couple is happy that they can now enjoy the house and garden in the summer. «We like it. It’s not super modern, but anything else wouldn’t suit me either. I could have bought a new house there,” says the carpenter, who also made or restored some of his furniture himself.

In autumn, the couple then wants to paint the facade and install a heat pump heating system. In two to three years, Mayer and Zehnder would like to devote themselves to gardening and, among other things, build a large garden house and a water lily pond. Stephan Mayer: “We still have a few plans, but in the near future we’ll have to start earning and saving money again.”