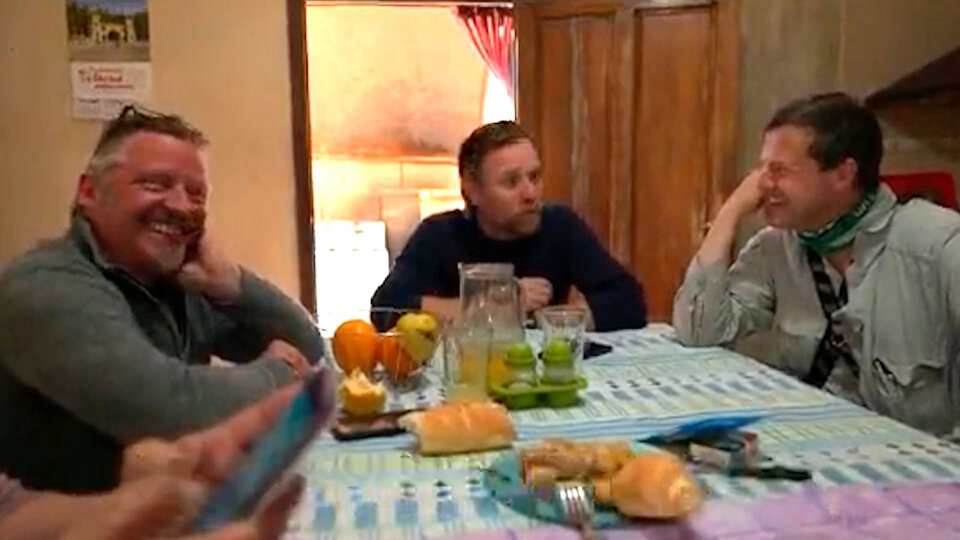 Scottish actor Ewan McGregor was back in the news after that images of him visiting the Argentine province of La Rioja went viral with his motorbike and had lunch with a family from the city of Chilecito who did not recognize him at first.

Through Twitter and TikTok, several users recalled the video, which is part of a documentary series filmed by the interpreter in 2019. In the clip, you can see the famous star of hits like “Trainspotting”; “Moulin Rouge“; and the Star-Wars prequel, “Obi-Wan Kenobi“, he heads for an electronics and audio store recharge the battery of your Harley-Davidson motorcycle with which it is arranged tour of the American continentaccompanied by his friend, the British presenter Charley Boorman.

In the clip, McGregor and Boorman they meet a family from La Rioja who do not understand English. “The great thing about this situation is that we came here, we thought it would be like a stereo storelike those places where they put up car stereos, and we thought they might have power, so we went in. And it turns out it’s just his garage, and the (family’s) house is behind.“explains the actor.

And continues: “It’s not a shop, but they let us connect to electricity. They gave us lunch, it was very funny and they don’t recognize us. We are total strangers, and now we use their electricity and eat their food.”

Posteriorly, The documentary filmmakers are seen having lunch with the Argentinian family and as one of the members of the Argentine family he seems to recognize McGregor.

“You suspect my identity, but you don’t trust your instincts. Use your senses, use your power.” jokes the Golden Globe and EMMY winner.

Finally, the host with whom he is having lunch realizes: identify him to his protagonist in the movie”The island“premiered in 2005.

Eventually, Boorman reflects on the hilarious encounter and insists he “will always remember people”.

“The people are amazing, amazing. Friendly, attentive, with open doors, no one ever said ‘no’ to us. It is a wonderful place in the world. I’m sorry to leave,” he closed.

Among other provinces, the actor also passed through San Juan. His presence in Jáchal was a true revolution: thousands of people came out to meet him and take pictures with him.

the step of Ewan McGregor and Charley Boorman because Argentina is part of the documentary series “Motorcycle Journey: From South to North” (Long way upin English), which was filmed for 100 days in 2019 and the premiere on the streaming platform Apple TV+ on September 18, 2020.

In this production, they both decided to ride Harley-Davidson motorcycles Live Wirethe brand’s first electric motorcycles, from the city of Ushuaia, in the province of Tierra del Fuego, to Los Angeles, California, in the United States.

Similarly, “Travesía en Moto”, it is the continuation of the series “long way” 2004, where McGregor and Boorman traveled from London, UK, to New York City; and last name “Long way down“ 2007, when they traveled from the town of John o’ Groats, Scotland, through 18 countries in Europe and Africa to reach Cape Town, South Africa.

See also  The story behind the meeting of Gorillaz and Trueno: the daughter of the singer Damon Albarn is a fan of the rapper