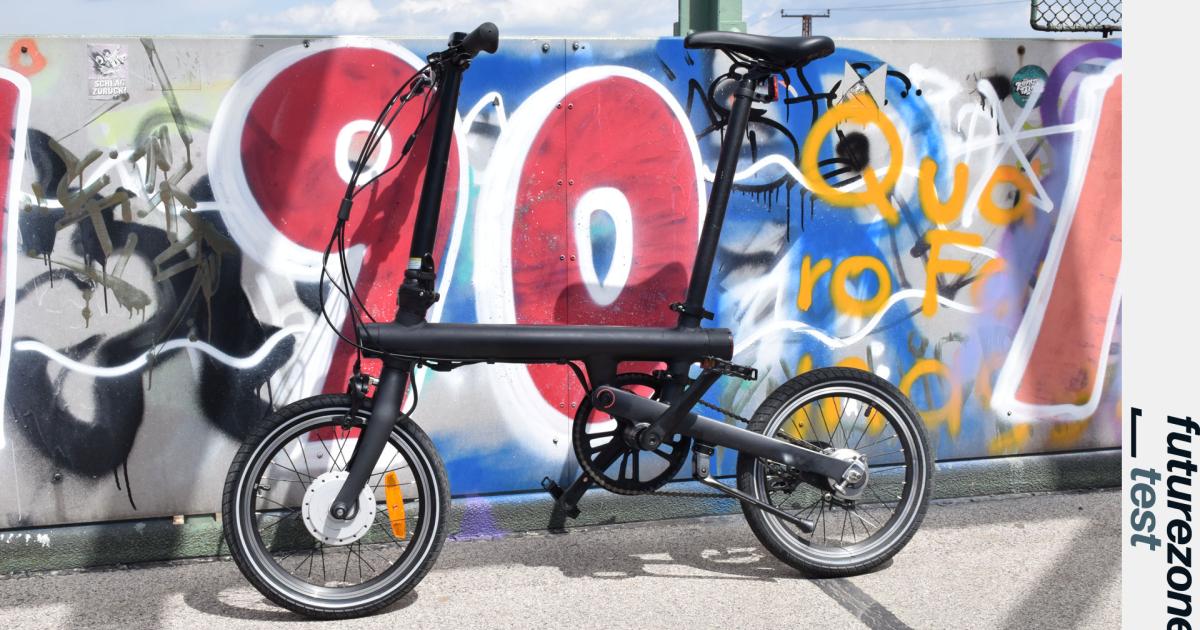 The electric folding bike has a cool design, practical dimensions and a lot of power. It also makes a lot of noise, but that hardly bothers you.

The folding bike is easily recognizable with a sleek, streamlined silhouette and matte black finish

Folding bikes are insanely comfortable in a city. They are small and manoeuvrable, fit well in elevators and can be folded up in an emergency and taken with you on public transport.

With an electric drive they are even more pleasant. One of the most elegant representatives of this type is the Xiaomi QiCycle, which can also be found under the names Mi Home QiCycle or MiJia QiCycle. I have tested it.

The QiCycle is not entirely new. It appeared on the bicycle market in some countries as early as 2017. Its most striking features: A slim frame for e-bikes, 16-inch wheels and only 14.5 kg weight. When mobile, it is only 125 cm long. The battery in the middle pole holds 5.800 mAh or 208.8 Wh and also supplies the built-in front and rear lights. The motor has an output of 250 watts and is located on the front wheel hub. The range is given as 45 kilometers.

You can find one on the rear wheel 3-speed wheel hub gear by Shimano. The seat post supports a wide range of body sizes. Even with 1.90 meters you sit comfortably. There is a disc brake at the front and a hub roller brake at the rear. The model I tested has a chic matt black finish.

The QiCycle is activated by an on/off button on the bike computer on the left handlebar. If you want to be supported by the e-motor when riding – why else do you have an e-bike? – you have to press the button again and a missile icon will appear on the display. Use the up and down arrow keys to switch between the 3 support levels switch. A longer press on the arrow keys activates the lighting.

When you step off, the motor immediately pushes you on thanks to the torque sensor. At level 3, this can sometimes be jerky, even if you don’t pedal that much. Riding uphill with the highest assist is a pleasure. The engine is not of the quiet variety. A electric howl you can always hear it, but in between the engine also surprises with variations on its soundtrack. Sometimes he gives off a deep hum.

The engine thrust when driving often comes in waves. Sometimes he really pushes, sometimes he holds back. That works not so finely tuned, But you get used to it. Since the motor is on the front wheel hub, you have to be careful on steep paths or ramps that your center of gravity is not too far back, otherwise the wheel will spin and you will lose it balance a little. The short wheelbase and the seat height make it possible.

Of the bike computer shows speed, battery level and kilometers traveled (since last switched on), nothing more. You can also use the e-bike via Bluetooth with the Xiaomi Home App associate. Apart from the fact that you can then read the percentage of battery charge on the smartphone, this makes no sense.

If you want to park the bike on the way, there is the problem of where to thread a bike lock. The triangle formed by the center rod, rear wheel fork and seat post seems logical. But that’s not really safe, because you move only 2 clamps must and can pull out the seat post. This is exactly what you have to do if you want to pull the battery out of the QiCycle or fold up the bike.

The seat post runs directly through the battery, which is why it has a hole. The battery is unlocked with a push button. A Schlossto prevent the battery from being taken along, does not exist.

Do you want the bike? fold up, you pull out the seat post and you can immediately swing the rear wheel fork down towards the front wheel. The handlebar can also be folded down. Two magnets ensure cohesion. The seat post is better stowed separately in a trunk. The whole folding process is not complicated and can be carried out in a few seconds with a little practice.

The Xiaomi QiCycle is a neat little e-bike that’s easy to maneuver and makes pedaling a whole lot easier when needed. the Operation is easy, there are not many bells and whistles. The integrated lighting is flawless, as is the wheel hub gears. The wheel is small enough to be pushed comfortably through hallways and can be made even smaller by folding it up. On the other hand, it is large enough to allow tall people to sit comfortably on it.

That there is no eyelet to really secure the frame with a lock is a Disadvantage, but that would probably have spoiled the design as well. The clearly audible engine noise and the varying thrust could be disturbing for some people. You don’t need to expect more than basic information from the bike computer.

As mentioned, the Xiaomi QiCycle has been on the market for a number of years 900 to 1000 euros available. It used to be cheaper and was offered by more retailers. Newer and cheaper electric folding bikes are easy to find, also from Xiaomi and its sub-brand HIMO. If you like being able to fix your bike yourself, check out iFixit’s analysis. The website rates the repairability of the Xiaomi QiCycle as 6 out of 10.