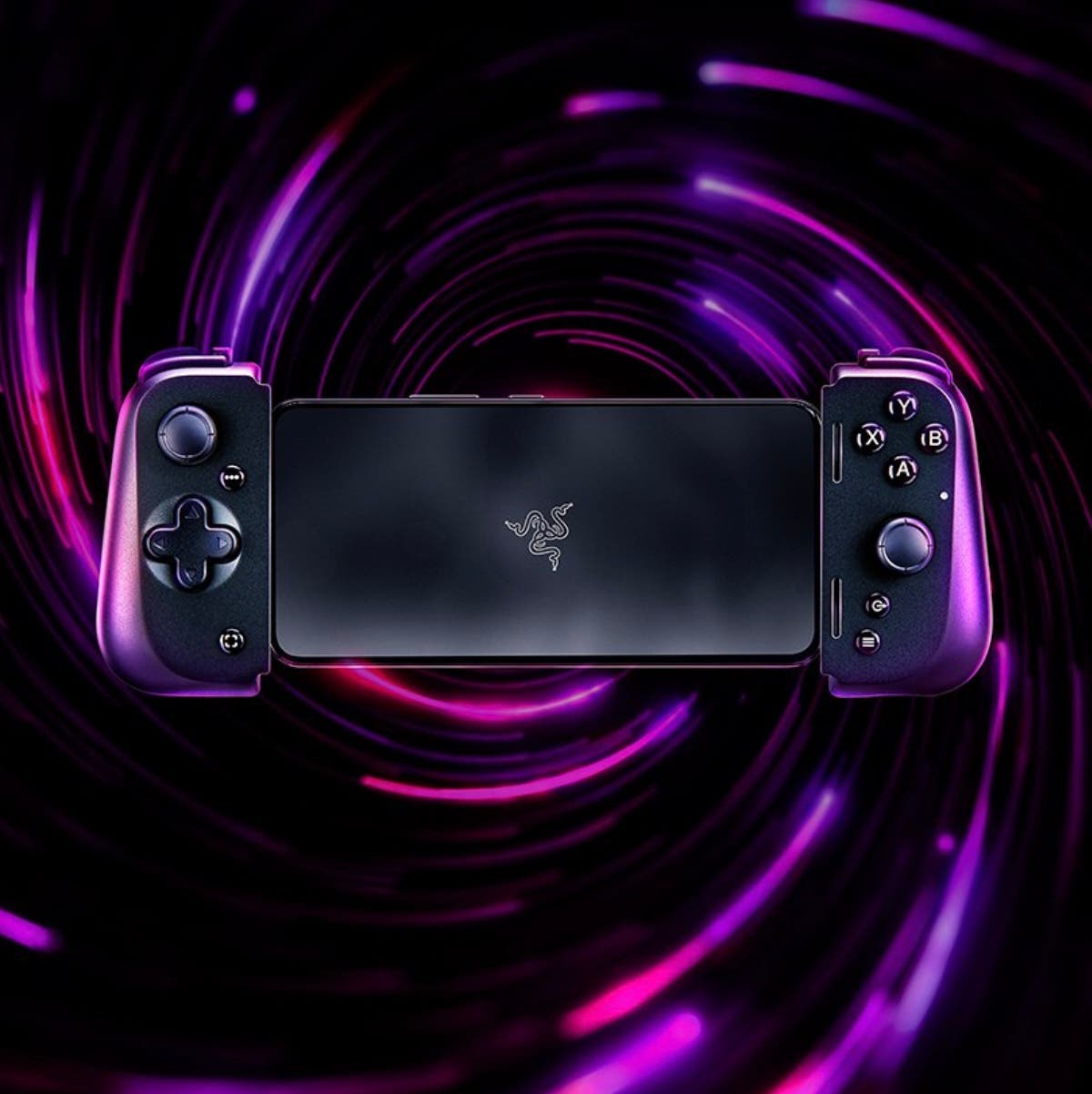 A sensible upgrade for all mobile games

We were able to try out an interesting project with the first Razer Kishi, but it wasn’t fully developed in the end. Although the pluggable controller for Android and iOS was very solid, it was far from the quality of real input devices. The following Kishi V2 (for Android) does many things differently in the test and we were able to try out the good piece.

Well-known design with sensible changes in stability and feel

The new Razer Kishi V2 comes in the usual plastic dress, but has been significantly strengthened at the rear for the smartphone. The insertion no longer works via direct inlets on the sides, but the cell phone is inserted almost “loosely”. The rubbery lugs then keep it in the frame. Of course, this is a little less stable than the predecessor, but as long as you don’t lose your composure while gaming (pun intended), the smartphone will stay safe in the Razer Kishi V2.

The button layout has also changed slightly. Two small macro switches have been added to the shoulder buttons, which you can assign as you wish. They act as a kind of “L4” and “R4” keys. All you have to do is use the appropriate Razer app, which we’ll talk about in more detail below. Overall, the Razer Kishi V2 is of high quality, even if a lot of plastic is used, but that’s the same with other controllers. However, this one has a comparison that even the Kishi V2 cannot win.

For example, a PS5 controller costs only half as much as the Razer Kishi Razer Kishi V2 and has a whole bunch more technology (gyro sensors, battery, haptic feedback and more) installed. Of course, a lot is financed through the licenses for the games for the console, so that Sony can make some things cheaper, but the price difference is enormous. Because apart from the buttons themselves, the Razer Kishi V2 in the test doesn’t offer much more than a normal PS5 controller, which you can also pair with Android and iOS. Here I would have wished for something more.

No spongy keys and triggers – one point of criticism remains

An interesting example here are the buttons and triggers of the Razer Kishi V2 in the test. They feel much better to use, since they are finally noticeably clickable and don’t appear to be “built on soap”. However, these now click like a mouse button. If you don’t have headphones handy, you’ll hear this permanent high-frequency clicking noise, which can be quite annoying. The buttons on normal controllers don’t actually click at all and are still not spongy, as was the case with the first Razer Kishi.

Nevertheless, the jump from the predecessor to the Kishi V2 can be clearly felt and positively emphasized. The keys are very easy to press, precise and feel impeccable. Only the clicking noise is annoying at times. The analog triggers R2 and L2 also behave very well, which can be continuously pressed and no longer only generate a trigger when pressed completely. So the operation is really successful, even if it’s still not quite perfect. 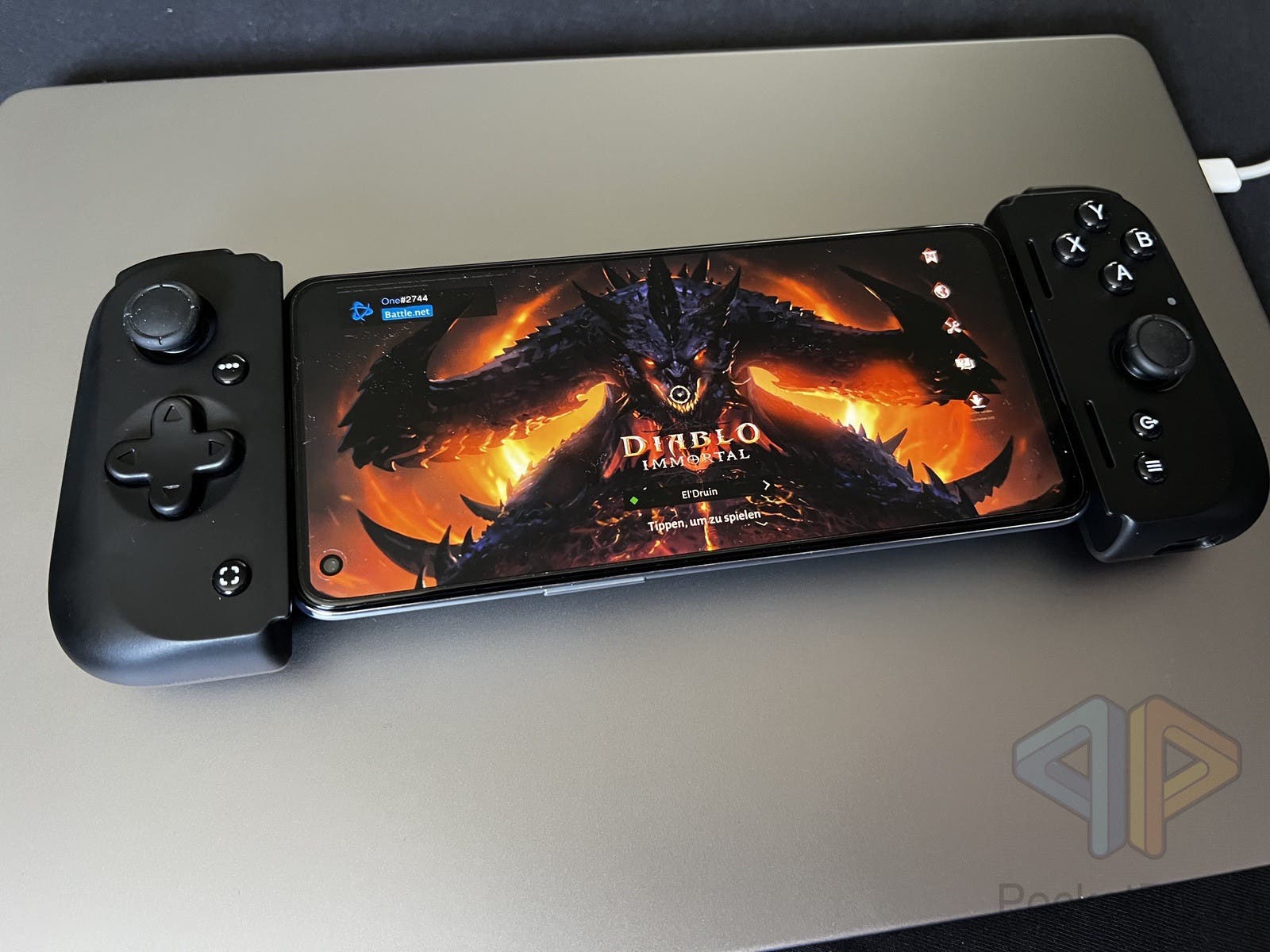 Razer Nexus app gives you full control over all settings

Razer offers a range of apps to deal with different products from the house. Incidentally, the new Razer Nexus app also replaces the old Kishi app, so switching is actually worthwhile, especially since you get many new functions via it. For example, you can use it to activate and edit the above-mentioned mapping of the macro keys next to the triggers. But of course that’s not all.

If you are considering mobile streaming of content and games, you can enable mobile streaming via the Razer Nexus app and start a live stream from within the app via Facebook and YouTube. Incidentally, the Razer button for directly saving videos and screenshots is also used here. You can then easily manage them via the Nexus app. 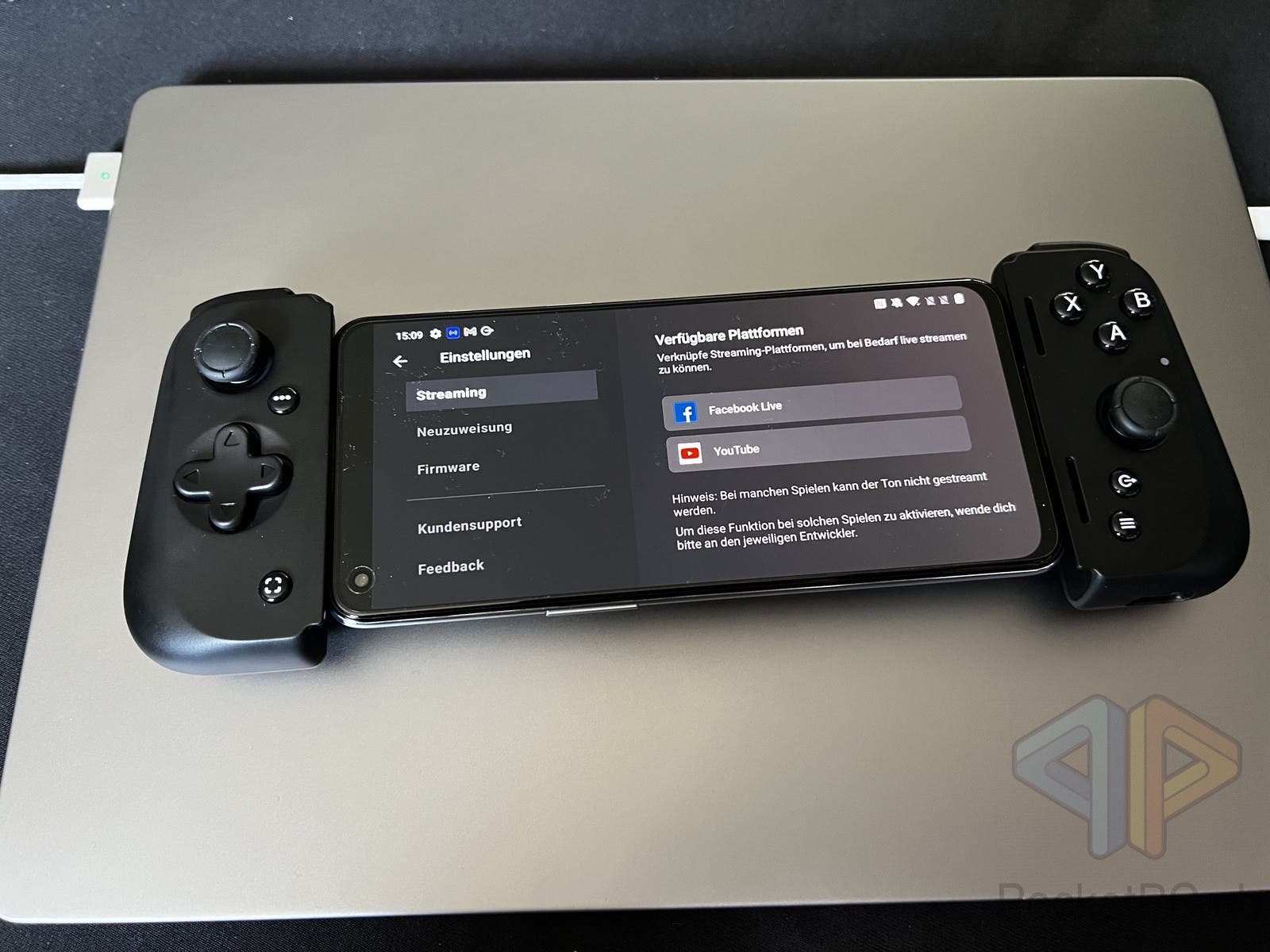 The app also acts as a game launcher. You can enter all the games installed on your cell phone there and start them from the app. The program also displays other compatible games. Also strong: Steam-Link is advertised in the app and so game streaming with the controller is easily possible. We were also able to test this with GeForce Now and it actually worked very well as long as the games also have mature controller support. Strong!

But how does the Razer Kishi V2 actually feel when gaming? In short: Strong! In fact, you have a bit of the feeling of holding a Nintendo Switch in your hands, but with a much better screen and much more power, depending on which smartphone is in the controller, of course. The buttons respond perfectly and there is zero latency. This is also due to the fact that the Kishi V2 is connected directly to the device via USB-C. It simply becomes an intelligent gaming extension of your smartphone.

By the way, the mobile phone sits stably in the controller and does not wobble. We tested the Razer Kishi V2 with a OnePlus 9 Pro, a OnePlus Nord 2T, a Galaxy S22+ and a Google Pixel 6. Each of the devices fit into the holder without any problems and sat firmly in the “saddle”. You can use the additional brackets included in the scope of delivery to adjust the fit accordingly. 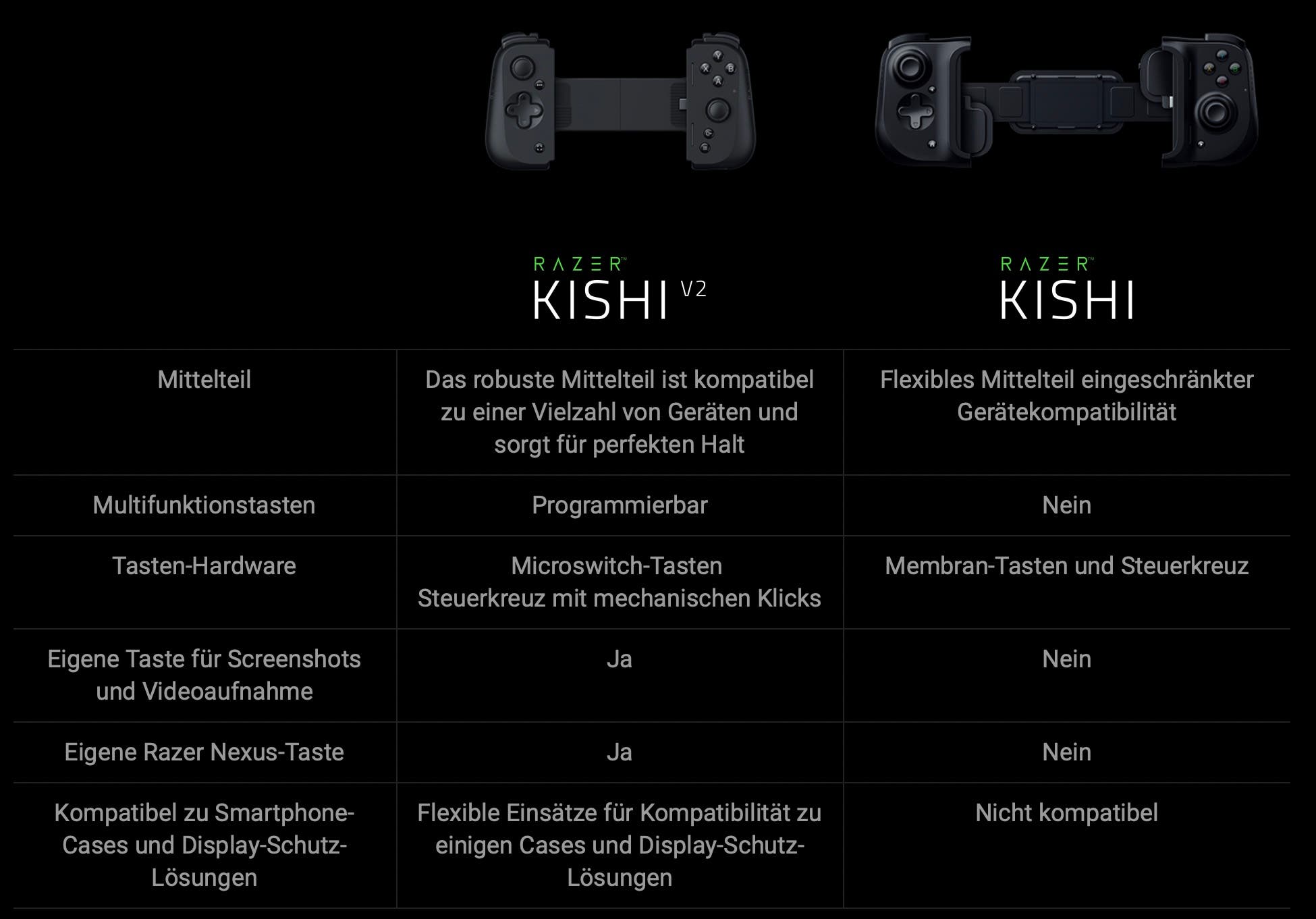 The Razer Kishi V2 compared to its predecessor. A lot has happened and Razer is creating a worthy successor.

Conclusion: Razer Kishi V2 still no alternative, but with criticism

In the test, the Razer Kishi V2 shows a decent leap forward compared to its predecessor! Razer has addressed many of the criticisms, especially the spongy keys at the time were a horror. Although these have now turned into small “clickers”, they are only unpleasantly noticeable in the background noise, if permanent mouse clicking should bother you. In addition, many games that support Android’s interface for controller mapping are already compatible. The great Nexus app also helps with mapping the macro keys and gives game suggestions that work 100 percent with the device. A chic overall package.

However, we have to talk about the price. The Razer Kishi V2 for Android costs over 100 euros / Swiss francs, more precisely 119.99 euros or SFr. and the question arises a little why the manufacturer does not place it more competitively. Because for less than 60 Euro / SFr. you get a PS5 controller, which also works natively with Android and iOS works. Then buy a mobile phone clasp for 15-30 euros / SFr and put the device on the PS5 controller: Done! And the PS5 controller is worlds better finished, more stable and the buttons feel even better. Ok, but then the smartphone is not in the middle between the gamepad buttons and analog sticks. Well, the smartphone doesn’t look like a Nintendo Switch on steroids.

But you don’t have to fool yourself here: The Razer Kishi V2 remains without alternative, just like its predecessor, because there is no serious competition from other manufacturers. Also not a cheap tinkering solution with real console input devices. This is a specialized controller for Android smartphones that does a really good job, which probably also explains the price. However, since I personally use an iPhone privately, I am particularly looking forward to the iPhone version of the controller! Perhaps you will soon be able to read a comparison of the model for the Apple devices here.

All in all, I give serious mobile gamers a clear recommendation at this point. If you actually want to pay the admittedly high price, you will really enjoy the gaming gadget. It greatly facilitates the gaming experience in almost all compatible mobile games. However, you then also have to pay 120 euros / SFr. put …. on the table. If you like to gamble on the go, you will definitely get a lot from the Razer Kishi V2 for Android.

See also  FIFA 22 renews itself and bets on mixed football