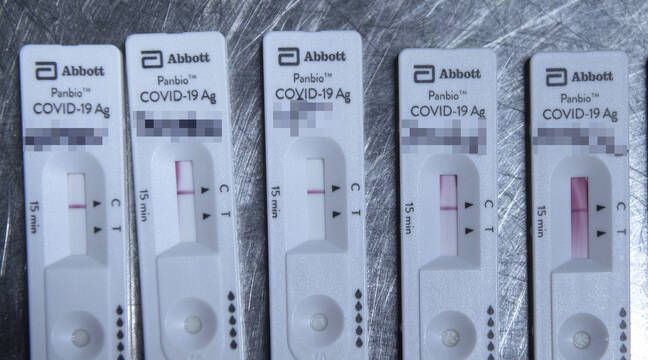 A positive self-test with tap water? Why this is not possible

A self-test passed under tap water. A few moments later, a positive result is displayed. Here are the images and videos that
circulate for several days on social networks. In videos posted to Facebook on January 8, a man takes the part of the test containing the strip directly underwater. He repeats the operation on a second test, this time only applying five drops to the part of the test provided for this purpose. The two tests then appear positive in the photos.

The operation prompted many comments questioning the reliability of the tests: “What a scam! “,” Powder in the eyes “,” What is this bin’s “…

Abbott, the maker of the test seen in these videos and photos, recalls to 20 Minutes that his test is to be used “with samples collected with a nasal swab inserted into a person’s nostrils.” The company denounces the “dissemination of false information”.

Why did the tests come back positive after being taken under tap water? Abbott sketches one lead: “Other liquids have chemical properties that can cause a chemical reaction on the test strip, resulting in misleading or inaccurate results. “

To find out more, we asked Etienne Joly, Inserm researcher at the Institute of pharmacology and structural biology in Toulouse. To understand the phenomenon, we must first remember how these tests work: they use antibodies, one of which will be “colored” and distributed over the entire membrane of the test. Two more will be fixed at the level of the control and test lines.

When, after having taken a sample from the nose, a person puts their swab in the plastic container that contains the liquid, they deposit, if they are infected with Covid-19, virus proteins in this liquid. The swab should normally have collected if the person is a carrier of Covid-19.

Viral proteins are deposited on the strip

What is the use of this liquid in which the swab must be soaked? It “contains significant amounts of detergent and salt, which dissociate the viral particles, so that each of the proteins is solubilized”, recalls Etienne Joly.

Then, under normal conditions of use of a test, the person being tested puts a few drops of this detergent on the strip. There, the solubilized viral proteins will conjugate with the colored antibody and will migrate on the test strip like water on a blotter.

They will then meet the other antibodies present on the test and control lines, which makes these two famous lines appear.

Why do these lines appear, giving a false negative, when tap water is poured over a test? Could it be because this water contains a very large number of viral particles? The researcher rejects this hypothesis, “very unlikely”.

The most likely hypothesis comes from the misuse of these tests and the absence of detergent: “These tests are based on the solubilization of viral particles in a medium containing detergent,” recalls the scientist. If you are using tap water, the sample you apply will not contain detergent, and the antibody conjugated to the color reagent will tend to bind unspecifically to the test strip. “

Other videos with Coca-Cola, beer or compote

In August, while similar videos had gone viral, Akli Bouaziz, scientific director of AAZ laboratories, a manufacturer of self-tests, also denounced a “misuse” with our colleagues from France 24 and AFP: “The fact of deriving the test and misusing it triggers these two bands where the test looks “positive” but it is not. If you take the correctly used test with the reagent, you add a drop of water to it, the test will be perfectly negative [en l’absence de particules virales]. The reagent is absolutely necessary for the proper functioning of the test. “

In other videos, Internet users had poured Coca-Cola, beer or even compote on PCR or antigen tests. Again, these experiments did not demonstrate that these tests detected the Covid-19 virus in these liquids.