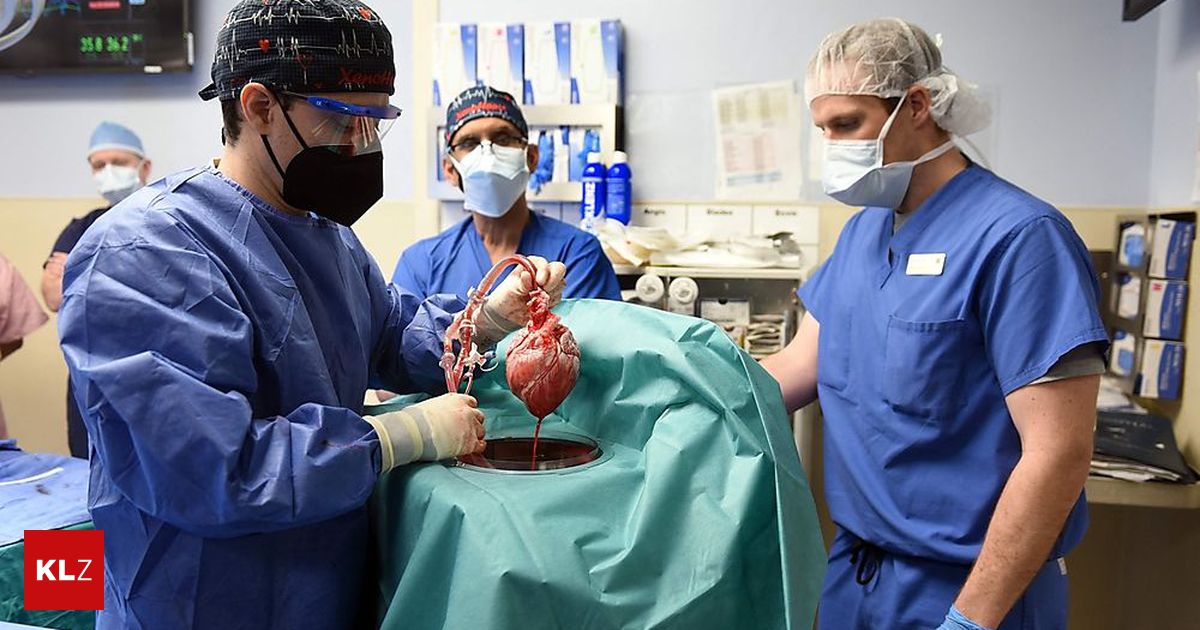 For the first time in the United States, a patient received a genetically modified pig heart. That gives hope to those who need a donor organ. Why the “milestone” should nevertheless be taken with caution.

In the body of David Bennett A pig’s heart has been beating since last Friday. For the seriously ill 57-year-old American, it was the last resort. He could have died or underwent the procedure. The result of the eight-hour operation: for the first time worldwide, a Pig heart as a substitute organ in a person.

The University of Maryland Medical Center in Baltimore announced the premiere on Monday. The patient was doing well – three days after the operation, they said. Then yesterday the next message: The man was no longer connected to a heart-lung machine. “His heart beats well. He continues to recover. “

The transplant shows that a genetically modified animal heart can function like a human heart without the body rejecting it immediately, according to the clinic. “This was a groundbreaking operation and brings us one step closer to solving the shortage of organs,” said the doctor performing the surgery Bartley Griffith.

Speaking of a “milestone” Günther Laufer, Cardiac surgeon at the General Hospital in Vienna. The procedure was preceded by complex processes, explains the doctor. Basically, the heart of a pig is similar to that of a human; purely functionally, it fulfills the necessary requirements. But humans would repel immediately. The muscle dies in a period of a few minutes to half an hour, says Laufer. “The challenge is to use various measures to create a heart from this pig heart that can be acutely implanted.”

The aim was to “cut out” the characteristics that are responsible for rejection from the animal’s genetic material and then to clone the cells. Ten genetic adaptations was found in the pig heart that was transplanted. So one had to remove the sugar structures that line the vessels of the pig heart. Otherwise, humans would have reacted to it with antibodies. The gene that ensures that the pig’s heart grows has also been “knocked out”. Be there highest technologies in medicine and biology used, says Laufer.

Since the 1980s, Xenotransplantation researched. The technical term simply describes the transfer of functional cells, tissues or organs between different species. For example, a doctor in the US gave birth to a sick newborn girl in the 80s Pavianherz used. It only survived a few weeks. In 2016, US and German scientists reported in the journal “Nature Communications” that a pig’s heart had been beating for two and a half years in the body of a monkey.

Pigs have a similar metabolism to humans and are therefore suitable as donors. It is already common individual heart valves of man to be replaced by that of pork. The entire organ could – until now – never be transferred.

“Could make up for lack of donor organs”

The successful operation now gives hope to those who are waiting for an organ. “You would be able to compensate for the shortage of donor organs,” says Laufer. He also sees potential in other organs like kidneys transplant from pig to human. Most patients in Austria would wait for their kidneys, the surgeon knows. Also Peter Zilla, former director of the Groote Schuur Hospital in Cape Town – where the doctor Christiaan Barnard transplanted the very first heart in 1967 – sees the future in the interventions. “A lot would change. In America alone thousands of hearts are missing every year. “

Nevertheless, both experts express skepticism. Just because the heart works in the short term doesn’t mean it does longer term also does, they say. There are complex differences between humans and pigs. “In addition to the immediate rejection, there are other intolerances,” says Laufer. That is why the patient in the USA also needs one immunosuppressive therapy. The clinic says Bennett will be closely monitored for the coming weeks.

Pigs as a “spare parts store” – is that ethically ok?

And of course the transplant throws out ethical point of view Questions on. So condemned Kurt Remele, Theologian and animal ethicist at the University of Graz, the transplant. Pigs would thus be instrumentalized twice by people, on the one hand as “luxury goods (nobody has to eat pork for health reasons, on the contrary)”, on the other hand, according to Remele, as “Spare parts store”. “Why isn’t research focusing on medical alternatives that avoid animal suffering and death?” Asks Remele, Fellow of the Oxford Center for Animal Ethics.

However, Remele is in the minority within his ethical guild. Most of his colleagues (see interview with Ulrich Körtner) consider pork hearts to be one in view of the massive consumption of the mammal in humans morally justifiable border crossingwhose high benefit to humanity outweighs the concerns.