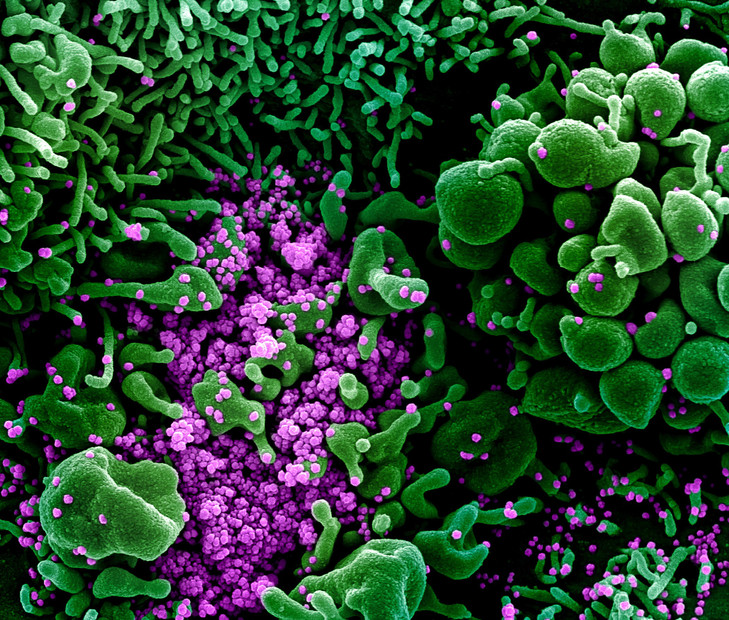 The new coronavirus continues to surprise researchers. While the majority of them thought it very stable until then, an American study published on July 2 in the scientific journal The Cell, hypothesizes that the virus currently plaguing the United States and Europe is a variant of the original virus. It would have become more infectious, and possibly more transmissible.

Like any virus, SARS-CoV-2 is constantly mutating. When a person is infected, the virus enters their cells and multiplies to create lesions, more or less important. What scientists call a new “copy” of the virus – which may contain a mutation. But none seemed to have imposed itself. In April, researchers from the universities of Sheffield (Great Britain), Duke and the national laboratory of Los Alamos (United States), however, established that a variant, named D614G, was now dominant in Europe and the United States. . They also argued that this mutation made the virus “More transmissible”.

To confirm this last point, these scientists analyzed data from 999 British patients hospitalized with Covid-19 and observed that those with the variant had more viral load in them. Thus, this variant of the virus would replicate more quickly in infected organisms and more effectively target cells in the nose, lungs and digestive system. A hypothesis already made at the end of April by American scientists.

« The authors convincingly demonstrate that this mutation of the virus gives it the ability to multiply more, because the viral load is greater, and therefore to be more transmissible ”, analysis Pierre Tattevin, professor-infectiologist at Rennes University Hospital. Indeed, the authors of the study cautiously advance the fact that the virus is more transmissible from one patient to another, precisely because it would infect infected people more quickly. The latter could therefore transmit it more quickly to others. And this is how “This variant of the virus would have become dominant as the epidemic progresses”, according to Pierre Tattevin.

A ” bad news “ for the infectious disease specialist. “Prevention of transmission will be more difficult”, he warns. This increased virulence of the virus could also explain the soaring contagion figures in the United States. (read below).

These results have yet to be subjected to large-scale experiments.

But this link between infectivity and contagiousness of the virus does not achieve consensus within the scientific community. For Étienne Simon-Lorière, researcher at the Institut Pasteur, nothing has been proven. “What is clear is that the variant of this virus has asserted itself well in the global epidemic. What is not clear is what brought about this broadcast. Is it because this variant is more virulent or are there other factors? We still don’t know. “

Several scientists have also expressed reservations about the methodology used. For Jean-Paul Stahl, professor-infectiologist at Grenoble University Hospital, we must take this study with great caution. “It comes from fundamental virology work which requires clinical and epidemiological confirmation”, he explains. Because laboratory experiments cannot exactly reproduce the dynamics of a pandemic. This is also the limit raised by Étienne Simon-Lorière. “These experiments were carried out in the artificial system of a laboratory. For greater certainty, animal models are needed ”, he abounds.

A variant that does not present more danger

The only certainty for the moment: the virus may have mutated but this mutation does not make it more dangerous for infected people. “This study does not indicate that the virus is necessarily more dangerous on an individual basis”, states Pierre Tattevin. The infectious disease specialist recalls that ” SARS-CoV-1, in 2003, (a “first” version of the coronavirus, Editor’s note) was much less contagious, but much more virulent, with 10% mortality ”. And that many seasonal viruses do not present any particular danger.

An epidemic out of control in the United States

The Covid-19 epidemic would have become ” uncontrollable ” in the USA, in the words of Anthony Fauci, the doctor in charge of the crisis unit at the White House.

Currently, the country has around 2.9 million cases and nearly 40,000 new infections per day. Some projections anticipate a number of contaminations soon exceeding 100,000 per day. The number of deaths stands at 132,226.

The epicenter of the epidemic is now concentrated in the south of the country, especially in Florida and California. Several counties have also had to close their bars. Miami has just reinstated a 10 p.m. curfew.